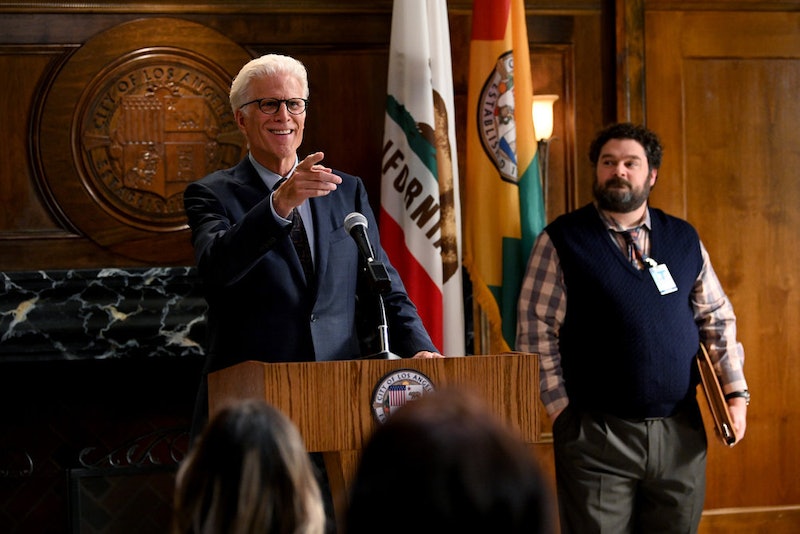 NBC's new comedy Mr. Mayor is a mashup of all of your favorite shows. It's a little bit of The Good Place (it stars Ted Danson), a dash of Saturday Night Live (courtesy of cast members like Bobby Moynihan and Rachel Dratch), and a whole lot of 30 Rock, considering the whole thing was originally conceived by Tina Fey as a spinoff to the beloved series.

The show, premiering Jan. 7, stars Danson as Neil Bremer, a wealthy retiree who decides to run for L.A. mayor after his teenage daughter accuses him of not doing anything with his life. When he wins, he discovers that he's a little in over his head, mostly because he now has to care about things like elementary school lunches and labor unions. The character was originally meant to be Alec Baldwin's Jack Donaghy, and the bones are still there: they share the same arrogance, self-absorption, and cunningness that makes them simultaneously great and terrible leaders.

Holly Hunter also plays Bremer's deputy mayor Arpi Meskimen, who is essentially the Liz Lemon of the series: she winds up doing most of the work while Neil acts as the figurehead. And Moynihan's well-meaning but bumbling communications director is an easy dupe for Kenneth Parcell.

Mr. Mayor's first two episodes are filled with the kind of inane hijinks you'd see on 30 Rock and The Good Place. For instance, after Bremer accidentally gets high ahead of a big press day, he attacks a beloved city mascot in a fit of paranoia, mocks a man named Manny Petty who injured his hands and feet, and mistakenly gives the acronym RATFART to an air traffic initiative.

Like Saturday Night Live, the jokes are a mile-a-minute, which Danson compared to downhill skiing in an interview with Variety. "Much like if you're on a very steep hill, you have one choice, point your skis down, and ski it as fast and as well as you can," he said. "If you try to sit back a little bit, you fall ... You just have to trust, you have to really know your words, and then kind of joyfully leap off the cliff."

Of course, Mr. Mayor hasn't yet earned the distinction of 30 Rock, The Good Place, or SNL — all of which are widely beloved and critically adored. But as a deadly pandemic continues to ravage the globe and pro-Trump insurrectionists siege the U.S. Capital, it is at least an escapist balm that allows us to envision a world in which neither are happening (thanks to Dolly Parton buying everyone the vaccine, COVID is no longer an issue on the show). In other words, it's like The Good Place Season 1: getting to pretend we're in the Good Place while the Bad Place burns around us.

More like this
How Much Are The 'Schitt’s Creek' Stars Worth?
By Hugh McIntyre
These Memes & Tweets About Alicent in 'House Of The Dragon' Prove She's The Queen Of Messiness
By Grace Wehniainen
The ‘Kevin Can F**k Himself’ Season 2 Finale Twist Is A Full Circle Moment
By Grace Wehniainen
Did 'Grey’s Anatomy' Just Drop A Major Taylor Swift Easter Egg?
By Grace Wehniainen
Get Even More From Bustle — Sign Up For The Newsletter