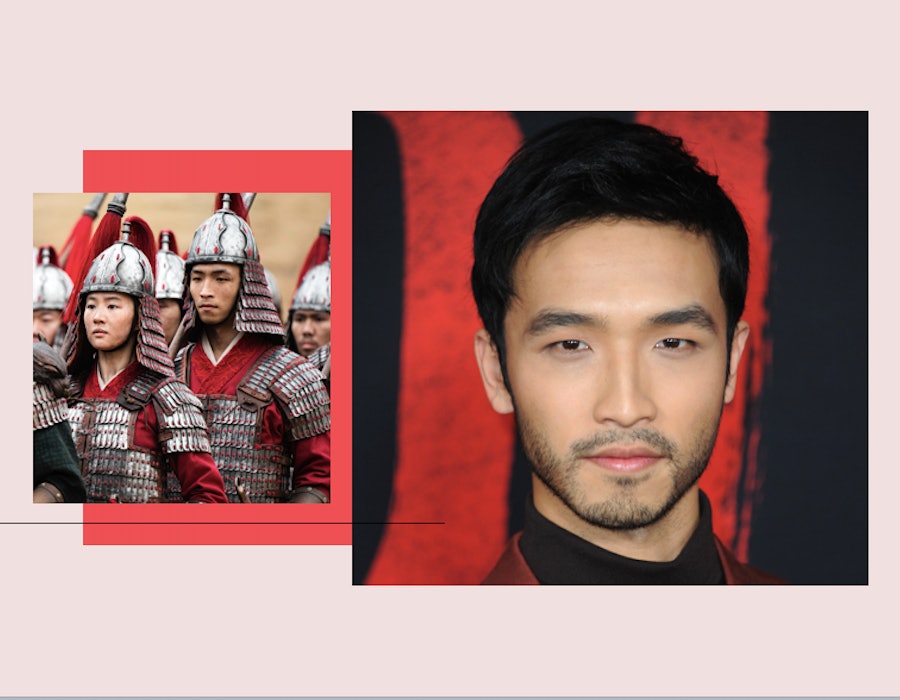 In a time when hate crimes against Asians around the world are on the rise and certain world leaders continue to stoke animosity towards Asians by calling COVID-19 the "Chinese virus," the long-awaited release of Disney’s live-action Mulan in September of 2020 now feels like a radical act. It’s a celebration of Chinese culture in a medium where Asians aren't often celebrated, let alone held up with the admiration usually reserved for superheroes. And thanks to Yoson An, who stars as Mulan’s new love interest Honghui, we now have not only another Asian man to lust over, but a powerful antidote to the stereotype that Asian men are somehow not attractive.

While in the classic 1998 animated film Mulan fell for her commanding officer, Li Shang, in a post-#MeToo world the character was split into two separate figures: Honghui and Commander Tung (Donnie Yen). But An, 28, is quick to note that he didn't approach Honghui as a re-imagining of Li Shang, but as a brand new character. "I was really given free reign creatively to come up with this new character with [director Niki Caro]," he tells Bustle. Still, there is one similarity between the two love interests: they're both breaking stereotypes when it comes to how Asian men are represented in Hollywood.

Li Shang has been heralded as a bisexual icon — and a beefy one, which can be tricky to balance in a world that likes to stereotype Asian men as goofy or effeminate (see: Sixteen Candles). While there was an “awareness” of that aspect of the character’s legacy behind the scenes, An says it’s very much left up to the audience and their interpretations, just like it was in the original. "I'm going to embody this character as truthfully as I can. And I think what's beautiful about it is that different audiences, whoever watches, will take away different perspectives," he says. "I don't want to impose my perspective of what happened. I want to leave that to the audience."

Another aspect of the two Mulan love interests that breaks stereotypes: their unquestionable hotness. It's been well established that Li Shang is one of the most attractive Disney animated characters ever created. And after training for six months to become a soldier in the Imperial army, An fully embodied the part. So much so that a female reporter audibly gasped at seeing him shirtless in the movie at the LA premiere. When I bring up that particular tidbit, he plays it cool. "Well, I'm flattered," he says with a laugh, letting the compliment sink in. "I did my job, and I'm glad the audience liked the outcome.”

It's a rare thing to have an Asian male love interest in a Hollywood film — that's part of what made Crazy Rich Asians so revolutionary — and Asian men often get the short end of the stick on television. This is slowly changing, with more Asian men earning crush-worthy status — albeit in mostly supporting roles in shows like Crazy Ex-Girlfriend and The Good Place. (It’s worth noting that John Cho, arguably one of the most successful Asian American actors in Hollywood to have crossed over into the land of the heartthrobs, has only played a real romantic lead once, in the tragically short-lived Selfie.) Despite the lack of Asian romantic leads in Hollywood, An insists he tried not to think about that groundbreaking aspect of his character. "I didn't see Honghui as [breaking] any sort of Asian stereotype. I saw him as a human being like any other human being," he says. "There are layers of emotions in every character and every personality."

It's that universal truth that An hopes shines through to audiences around the world — especially ones who might be affected by the hateful rhetoric surrounding Asians and coronavirus. "The themes of Mulan — to be loyal, brave, and true — [are] universal themes that apply to everybody, and it holds a very powerful message," he says the film’s heightened significance amid the rise of anti-Asian sentiments. "Hopefully through this film, more people can embody that within themselves so that we can be more connected as one people, and more true as one people, more authentic, and have more compassion for ourselves and others as well."