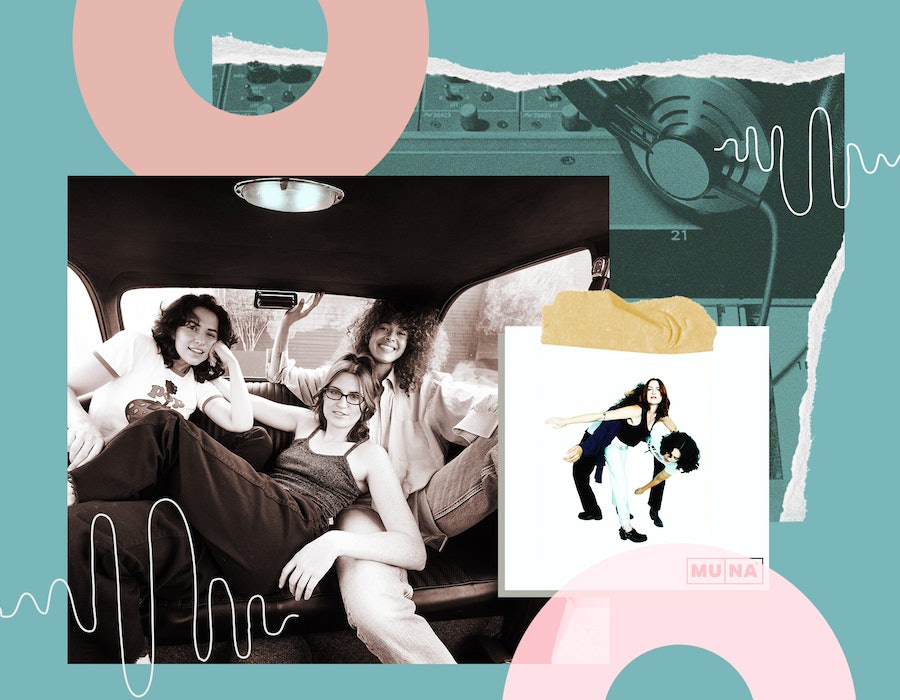 The members of MUNA are no strangers to sadness. In 2017, the three bandmates experienced a collective post-tour “severe depression.” They wrote the sad girl missive “Number One Fan” (which includes the lyrics, “So I heard the bad news / Nobody likes me and I'm gonna die alone / In my bedroom”), and later signed to Phoebe Bridgers’ aptly titled label, Saddest Factory Records. But when former USC schoolmates Katie Gavin, Josette Maskin, and Naomi McPherson set out to write MUNA’s latest single, “Silk Chiffon,” they decided they’d had enough with the melancholy.

“If you listen to our first two records, that sh*t ain't that happy,” Maskin tells Bustle. “We've done so much work on ourselves as individuals and as a band where it's just like, ‘I want to have f*cking fun.’ We're all going to f*cking die, but I would really just rather stop being such a sad sack.”

MUNA’s choice to embrace joy is a radical one. “Silk Chiffon,” which debuted in September and features Bridgers, is a queer anthem celebrating the soft, often silly side of being in love for the first time. MUNA’s performances of the song have been just as convivial. The music video is a millennial pink-tinted sendup to the queer camp classic film, But I’m A Cheerleader, and their recent performance on The Late Late Show with James Corden was prom-themed. All of it is deliberately “a bit cheeky and self-aware.” “Even just us having Phoebe on the song — we’re both artists that are known for sad music,” McPherson says. “So to make just a simple, happy love song is like, ‘Yeah, I'm capable of this. I'm capable of having a good day. You're welcome.’”

The song’s serotonin-filled energy has been infectious enough to make it the band’s first hit on Billboard’s Alternative Airplay chart, and to inspire legions of fans to playfully share lyrics like, “Life's so fun, life's so fun / Got my miniskirt and my rollerblades on,” all over social media. “I love seeing people make jokes about how they listen to it on repeat when they get up in the morning because I used to do that with songs,” says Gavin. “Someone said they said, ‘Life's so fun enough times until [they] actually believed it,’ and I think that's what we're doing as well. It's a manifestation tactic.”

Below, MUNA reflects on Snow Patrol, the songs Gavin thinks should play at her bandmates’ weddings, and Neutral Milk Hotel’s Anne Frank obsession.

You wrote “Silk Chiffon” with the hopes that it could be a song that kids have their first queer kiss to. Which makes me wonder, what’s the first song you ever made out with someone to?

Josette Maskin: “Silk” is a redemption song for young, queer makeouts. I remember one of my earlier makeout sessions was with this boy who played a piano version of “Everything in Its Right Place” by Radiohead and then he quizzed me on what song it was. I was like, "This guy is cooler than me.” You know?

Naomi McPherson: That's the trick they play on you!

It seems as if the process of creating “Silk” was pretty seamless. What’s the strangest way one of your songs has come to be?

Katie Gavin: Probably the five minute game. For our most recent record, we were playing a game in the studio where basically you have the synth and you have your drum machine and everybody has five minutes on a timer to add a part. It was just something we did to get the gears moving. Then we forgot about the tracks. But a couple months later I got an idea for something and it just so happened that it fit over the tracks that we had originally worked on.

Maskin: Didn't you write “If U Love Me Now” sitting under a table?

Gavin: I definitely have written songs in weird places, yeah.

Are there any bands or artists that people consider “cheesy” that you love unironically?

Gavin: There's a joke within the band [where] one tour we just kept repeating, "Chris Martin is the greatest songwriter of all time" to each other. I don't know. Coldplay is good. Naomi likes Snow Patrol.

McPherson: I feel like everyone likes Snow Patrol, they’re too good. In high school and early college it was peak hipster era [where it was all about] knowing about the most up-and-coming music that no one's ever heard of. Obviously there's still a subset of that culture that I feel connected to, but I really started listening to radio pop music when I was working this job at school where I couldn't plug my phone into the car. I had to listen to Top 40 radio, and the part inside of me that felt ashamed about liking the most pop, corny sh*t ever just died.

I completely relate to that. I feel like I spent that era downloading Neutral Milk Hotel on LimeWire just to feel cool.

McPherson: Yeah, but Rilke was an adult. It's not about the fact that Anne Frank is dead. It's that she was a child.

... And The Songs Gavin Thinks Should Play At Her Bandmates’ Weddings

What song would you want to have play at your wedding?

Gavin: I could probably pick what I would want to see at Josette or Naomi's wedding. I would want Josette to do an ABBA medley with choreography as their re-entrance.

Maskin: Naomi and I can do that for our B'nai Mitzvah.

Gavin: Yes! I want you to do an a capella intro and Jo and I are in the back and we’re doing fake backup singer step touches and that. And [Naomi’s partner] Ally is a little wine drunk and she looks really pretty, and she's doing her cute dances and you guys do your dance.

More like this
Becky G Once Had A Fear Of Speaking Spanish. Now She's Topping The Latin Charts.
By Tess Garcia
Avril Lavigne Never Let Go Of Pop-Punk
By Samantha Leach
Britney Spears Thanks Fans After Miscarriage & Explains Why She's Writing A Book
By Jake Viswanath
Doja Cat Needed Tonsil Surgery & Now She Can't Eat Taco Bell's Mexican Pizza
By Jake Viswanath
Get Even More From Bustle — Sign Up For The Newsletter