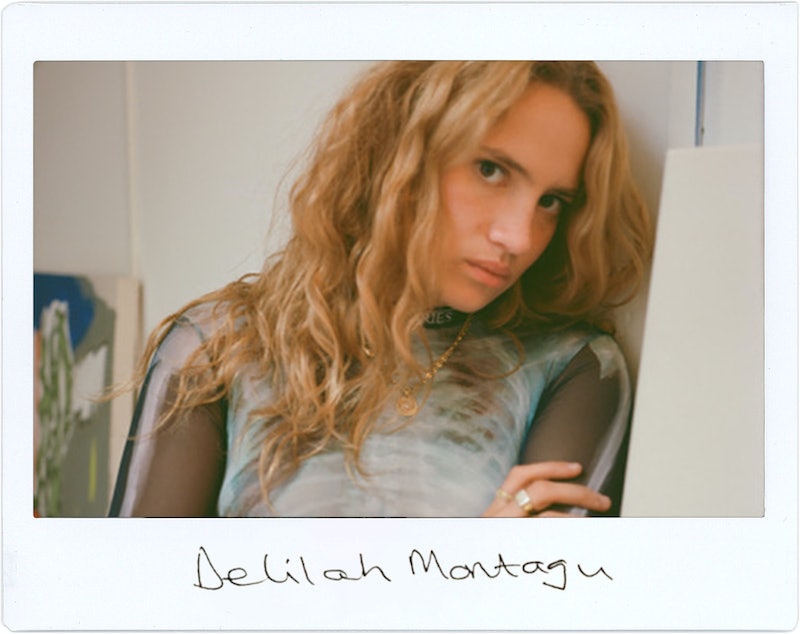 When celebrities (virtually) hang out with Bustle writers, we want to give them the chance to leave their mark. Literally. So we hand them a pen, a piece of paper, a few questions, and ask them to get creative. This time, musician Delilah Montagu is leaving her mark in the Bustle Booth

"It's been a good time, weirdly," says Delilah Montagu when I ask about her lockdown . She's speak experience. The 21-year-old singer-songwriter is speaking from a bedroom at her mum's house in Hampshire, where she fled to from London back in March. "I've been very inspired by being around nature in the countryside, with my mum and my girlfriend."

Nature makes up a huge part of Montagu's lyricism, as do themes of desire and heartbreak, all of which she expertly weaves together into ethereal but punchy melodies. Her writing skills are one of the reasons she found so much success at such a young age. By the time she was 19, Montagu had been signed by Columbia Records and, since then, her listenership has been steadily growing, with Next To Me (a Belle-and-Sebastian type tune with Maggie Rogers lyrics) racking up 1.7 million plays on Spotify. Montagu mentions Lizzo, Florence Welch, and Bon Iver when I ask about her favourite artists, but she grew up listening to Leonard Cohen and Carole King, she tells me.

Her debut EP Gold, released in 2019, was made up of four heartfelt tracks: Gold, Next To Me, Seven Days Of Rain, and Temptation. The latter was an anthem for a love unrequited, written when she was just 16. But Gold was far from her first foray into music. The embers of Montagu's creative journey were already burning before she left primary school. "I was writing music from the age of six," she tells me, and, speaking about her inspiration back then, she says: "[I was] writing heartbreak songs every day, which was influenced by my mum's experience, she went through quite a bit of heartbreak when I was young."

Version Of Me shows an artist who's evolved and grown in confidence to speak about her own encounters with love , loss, and the music industry – a woman who's fed up of trying to fit other people's idea of all of the above. "I'm tired of this make believe and I'm running out of things to be," she sings, asserting her need to carve her own path.

Montagu's creative independence and personal growth since her first EP are celebrated in the track. "I haven't always had the option just to just be myself and tell the truth of wherever I'm at — whatever that is," says the singer, who's now open about her same sex relationship with artist Hetty Douglas. "Since being empowered to do that, I've been a lot more creative ... I've learnt so much about who I am."

Version Of Me is out now. Listen on Spotify and check out the music video here.

What is one movie or tv show you are currently obsessed with?

Draw 3 emojis that describe how you're feeling right now: