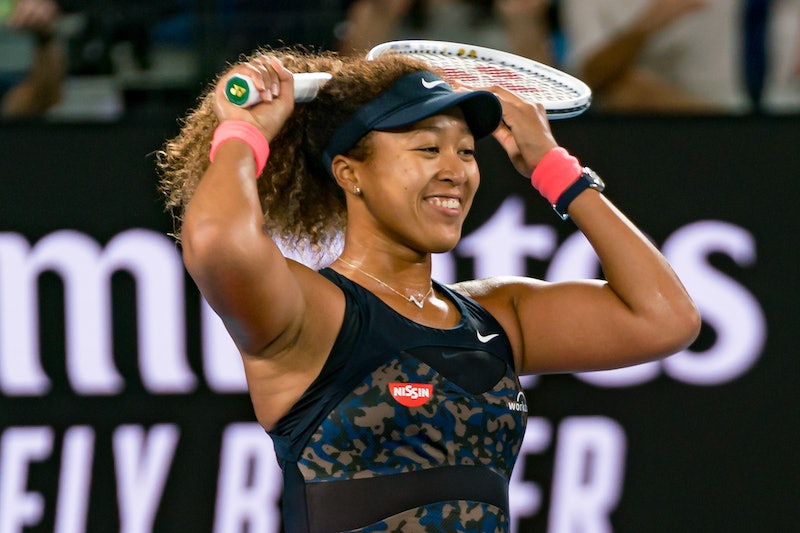 Hours after earning her latest major title, tennis star Naomi Osaka reacted to her Australian Open win on Instagram. The tournament culminated in her 6-4, 6-3 victory over American Jennifer Brady, so Osaka was understandably and undeniably thrilled. She shared photos of her latest trophy, captioning the Feb. 20 post, “Absolute madness.”

The 23-year-old, who represents Japan, also celebrated the fact that this is her fourth Grand Slam singles title, succinctly adding, “Number 4.” Her win in Melbourne on Saturday makes her a two-time Australian Open winner, in addition to being a U.S. Open champ twice over. That feat is all the more impressive considering her path to the final, which included knocking out tennis great Serena Williams in the semifinals, 6-3, 6-4.

In her speech during the trophy ceremony, Osaka acknowledged Brady, whom she’d also faced in the U.S. Open in September. Based on that tough match, she knew to expect a fight. “I told everyone that you were going to be a problem and I was right,” she said. Osaka also thanked the fans in the stands, noting that her last Grand Slam was played without an audience. “It feels really incredible for me. … Just to have this energy, it really means a lot,” she said.

In her post-match press conference, Osaka was open about feeling “a lot of nerves” on the court. She told reporters that being a past champion, and the expectations that come with it, played into that. Her goal was to “go out there and fight for every point,” and it turned out to be “a mental battle.”

Reporters also asked Osaka what she’ll do with her latest trophy when she heads home, and she shared that her parents have one at their house and the others are in her living room. Seeing them “serves as a really good inspiration,” she said. It seems like adding another to the collection can only help.

Next up on the Grand Slam circuit is the French Open this summer, and Osaka revealed that she has her eye on five titles right now. It could pose a challenge, as she’s only won majors played on hard surfaces so far and Roland Garros Stadium features clay courts. She acknowledged that fact when asked, saying she has to “get comfortable” on clay and grass, but felt she played well in France last year.

Beyond trying to up her trophy count, Osaka hopes for longevity. She’s made no secret of the fact that she admires Williams and wants her to “play forever.” Her goal is to one day be that kind of sports figure.

“Hopefully I play long enough to play a girl that said that I was once her favorite player,” Osaka said. “That’s the coolest thing that could ever happen to me.”