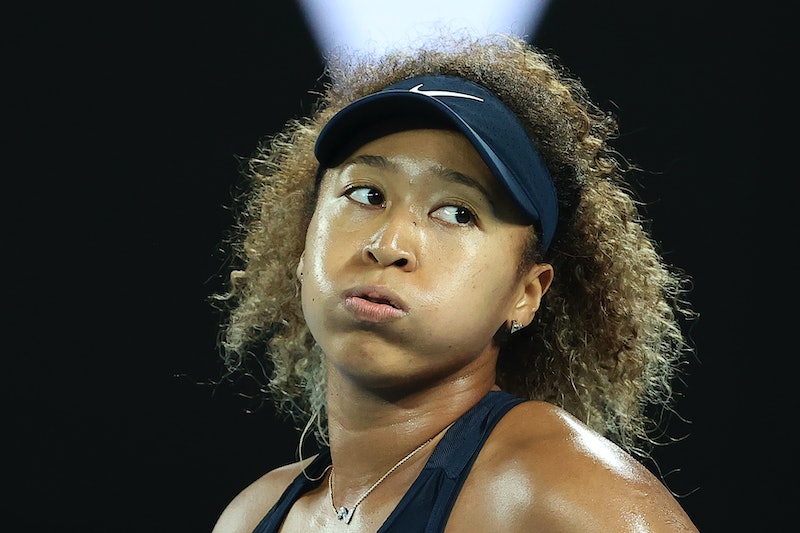 23-year-old tennis star Naomi Osaka is setting some major boundaries. On Wednesday, May 26, the four-time Grand Slam singles champion announced on Instagram that she will not be doing any interviews at the French Open (aka, Roland-Garros), which is set to begin in just a few days. Osaka cited mental health concerns as the reason she won’t be speaking to the press, and she also said that she will accept any fines that she’s issued as a result of failing to comply with the status quo.

“I’m writing this to say I’m not going to do any press during Roland Garros,” the athlete said in her Instagram announcement. “I’ve often felt that people have no regard for athletes mental health and this rings very true whenever I see a press conference or partake in one.” To prove her point, Osaka attached two video clips. In one, a journalist planted seeds of doubt into Venus Williams’ mind at just 14 years old. In another, NFL star Marshawn Lynch said very clearly that he only showed up for press interviews to avoid being fined. And after refusing to answer questions ahead of the 2014 Super Bowl, he was hit with tens of thousands of dollars in fines.

“We’re often sat there and asked questions that we’ve been asked multiple times before or asked questions that bring doubt into our minds and I’m just not going to subject myself to people that doubt me,” Osaka continued in her social media statement. “I’ve watched many clips of athletes breaking down after a loss in the press room and I know you have as well.” She said that she’s tired of the press “kicking a person while they’re down” and noted that it’s nothing personal against the tournament or journalists, many of whom she’s developed solid relationships with over the course of her career.

Osaka, who is recognized as the No. 2 player in the world by the Women’s Tennis Association, closed out her statement by standing up to those who have threatened her and other athletes with fines. “If the organizations think that they can just keep saying, ‘do press or you’re gonna be fined,’ and continue to ignore the mental health of the athletes that are the centerpiece of their cooperation [sic] I just gotta laugh, she wrote. She also added that she hopes the money that she is fined for refusing to put herself in such an uncomfortable situation will go toward a mental health charity.

According to The New York Times, some tennis tournaments have different rules, but in general, players are required to speak to the press after a match regardless of if they win or lose. The Williams sisters, for example, were fined on multiple occasions for refusing to do interviews. Venus was given a $3,000 fine in 2015 after not attending a press conference at the French Open. Five years earlier, she and Serena were both fined $4,000 for doing the same thing at Wimbleton.

In Osaka’s case, she’s not expected to win the tournament this year because she’s known to not perform as well on a clay surface. In other words, with the odds stacked against her, her refusal to speak to the press is an attempt to avoid confrontation after a potential loss. Three months ago, for example, Serena Williams left a news conference in tears after losing to Osaka in the semifinals at the Australian Open. “I don’t know. I’m done,” she said before leaving the press room altogether. It remains to be seen whether Osaka’s own stance, taken proactively instead of reactively, will elicit a change in the rules, though in any case, her position as the highest paid woman in sport (she earned an estimated $55 million in the last year, per Sportico, with only $5 million coming from the court itself) means she can certainly afford to take the hit.

More like this
Lewis Hamilton Turned Down A Role In 'Top Gun: Maverick' For This Surprising Reason
By Darshita Goyal
Harper Teasing David Beckham’s Dad Dancing Is Beyond Adorable
By Frances Stewart
Princess Charlotte Helped Her Dad Film An Adorable Video For Euro 2022
By Grace Wehniainen
Serena Williams Is Retiring From Tennis: “I'm Ready For What's Next”
By Marina Watts and Grace Wehniainen
Get Even More From Bustle — Sign Up For The Newsletter