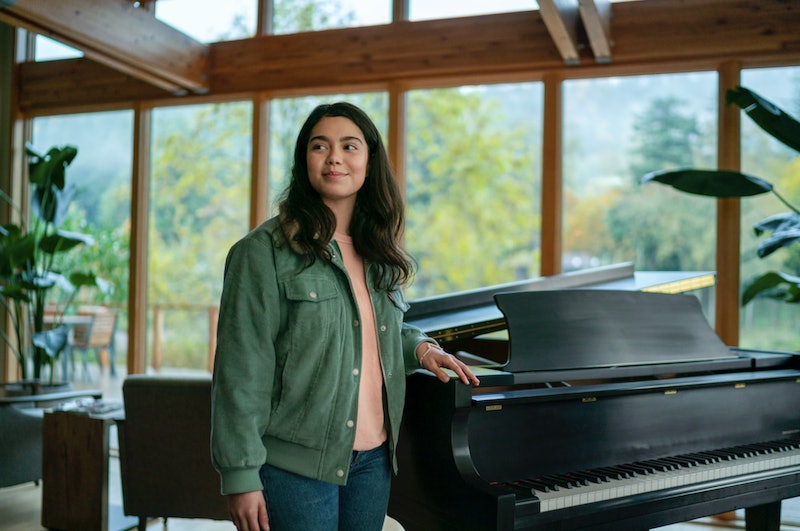 Having a dream is easy. Making it a reality is an entirely different challenge altogether. This conflict is at the heart of Netflix's All Together Now trailer. The newest addition to the streaming service's original high school movies stars Auli'i Cravalho and is slated to hit the streaming service on Friday, Aug. 28. And, if the trailer is any indication, it's definitely going to have fans reaching for the tissues — more than once.

Based on Matthew Quick's book Sorta Like A Rockstar, the story centers around Amber Appleton (Cravalho), a teenage girl who has big dreams of attending Carnegie Mellon University. However, despite what her positive attitude and upbeat personality may imply, Amber's life is far less perfect than she makes it out to be. With no money to speak of, Amber sleeps in a school bus at night alongside her mother. And while she tries to remain optimistic, Amber can feel her musical aspirations slipping away due to her lack of resources — that is, unless she can learn to accept help from those who care about her the most.

"Amber and I are so alike in that, I feel like I am pretty naturally optimistic, almost to a fault probably because I am not quite as honest with what's happening in my life to even really close friends around me," Cravalho revealed while discussing the film with Entertainment Weekly. "And that's something that really was highlighted during this time with the pandemic. I just really needed to learn to reach out. And so that's kind of how our film is centered — in knowing your community and leaning on your chosen family and times of need."

It's a role that Cravalho was born to play, not only because of how Amber parallels the Moana star's own infectious and bubbly personality, but also due to the musical aspect of the film, which will find Cravalho once again putting those impressive vocal chops to good use. "When I read this script, I immediately thought of her," director Brett Haley (Hearts Beat Loud, All The Bright Places) told EW in the same interview. "I immediately thought of her wonderfully bright and glowing personality. She lights up a room. She just has that quality. But she also has a depth that I don't think many people are aware of."

But just in case all that alone isn't enough to pique your interest, the clip also features Carol Burnett playing a character in a retirement community who gives Amber sage advice — and even some tough love — when needed. Talk about the gift that keeps on giving!

More like this
Here’s Everything Coming To & Leaving Netflix In February
By Jake Viswanath
Are Richard & Vika From 'Bling Empire: New York' Still Together?
By Karen Fratti
Pamela Anderson’s Dating & Marriage History Could Be Its Own TV Series
By Jake Viswanath
Yes, You Can Stream ‘To Leslie’ In The UK Now
By Sam Ramsden
Get Even More From Bustle — Sign Up For The Newsletter
From hair trends to relationship advice, our daily newsletter has everything you need to sound like a person who’s on TikTok, even if you aren’t.