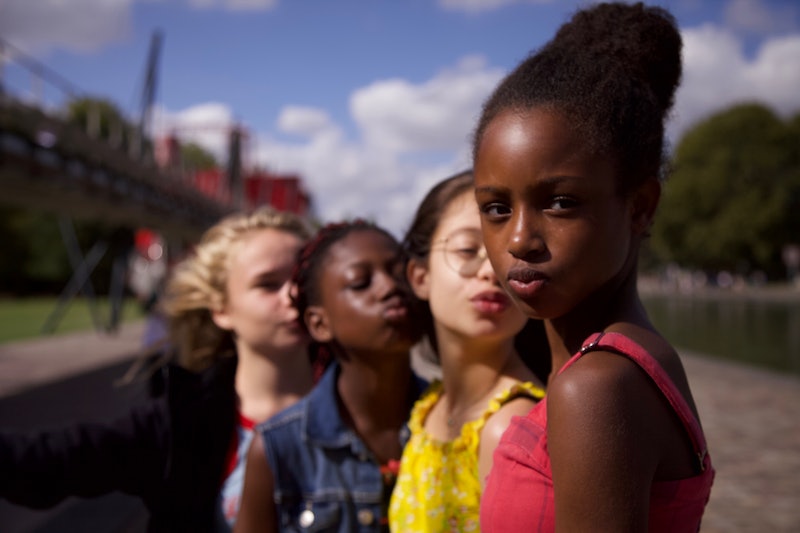 The French coming-of-age drama Cuties is now available to stream on Netflix, but before you dive into the film you might need a bit of background info. There's quite a bit of controversy surrounding the movie that might very well disperse once more people actually watch it. Directed by Maïmouna Doucouré, Cuties (in French, Mignonnes) tells the story of an 11-year-old Muslim Senegalese immigrant named Amy who moves into a housing project in Paris. While her family encourages her to be modest and obedient, Amy befriends a group of outspoken girls who form a dance troupe in order to gain popularity on social media.

Netflix bought Cuties just before its successful premiere at the 2020 Sundance Film Festival, but controversy struck late this summer when Netflix premiered its poster for the film, which featured the four lead girls in booty shorts and crop tops striking provocative poses — a vastly different image from the movie's original French poster, which showed the girls frolicking with shopping bags.

Additionally, Vulture reports, the description on the film's Netflix page read at the time, "Amy, 11, becomes fascinated with a twerking dance crew. Hoping to join them, she starts to explore her femininity, defying her family’s traditions." Almost immediately, the critics pounced.

On social media, accusations that the film promoted the sexualization of children were swift and vicious. Netflix was accused of promoting pedophilia. A number of petitions were started online to have the film removed from Netflix, while others threatened to cancel their subscriptions to the service if it wasn't. People who hadn't even seen the film swarmed IMDb and Rotten Tomatoes to leave bad reviews and plummet the film's ratings.

But Cuties also had its share of defenders. Tessa Thompson, who saw the film at Sundance, tweeted that she stood by her assertion that Cuties was a "beautiful film" and that she was "disappointed to see how it was positioned in terms of marketing. I understand the response of everybody. But it doesn’t speak to the film I saw."

Netflix quickly apologized for the poster, admitting that it was not representative of the film. Netflix CEO Ted Sarandos even called to personally apologize to Doucouré. Netflix updated the image on its service to match that of the original poster; the new description reads, "Eleven-year-old Amy starts to rebel against her conservative family’s traditions when she becomes fascinated with a free-spirited dance crew."

Netflix's apology aside, as a result, Doucouré herself became a target. As she told Deadline, "I discovered the poster at the same time as the American public." Her reaction to the criticism "was a strange experience. I hadn’t seen the poster until after I started getting all these reactions on social media, direct messages from people, attacks on me. I didn’t understand what was going on. That was when I went and saw what the poster looked like. I received numerous attacks on my character from people who had not seen the film, who thought I was actually making a film that was apologetic about hyper-sexualization of children. I also received numerous death threats."

In Doucouré's words, it sounds like Cuties itself is a criticism of the very things it's being accused of promoting. As she told ScreenDaily, "the work grew out a desire to explore what it means to approach womanhood between two cultures as well as the wider theme of the hyper-sexualization of youngsters in modern society." Doucouré spent a year researching, interviewing young dancers, and attending performances. She recalled that one performance featured "girls on stage dressed in a really sexy fashion in short, transparent clothes. They danced in a very sexually suggestive manner. There also happened to be a number of African mothers in the audience. I was transfixed, watching with a mixture of shock and admiration. I asked myself if these young girls understood what they were doing."

Watching the film's trailer, it's immediately clear that Cuties is not in the same vein as Toddlers in Tiaras or Dance Moms, though it does feature some uncomfortable imagery of young girls dancing provocatively.

Whether or not Cuties is successful at using sexual imagery of young girls to criticize how they're drawn into hyper-sexualized situations remains to be seen. The gavel seems to have fallen on both sides. As Kristy Puchko at Pajiba writes, "I can confirm: Cuties does have scenes of 11-year-old girls twerking and wearing revealing clothing while doing so. However, Cuties is not promoting or glamorizing the sexualization of young girls. Presentation is not the same as promotion. Instead, the film critiques these choices by exploring why girls might engage in such behavior and how they feel about it."

Yet at ScreenDaily, Fionnuala Halligan writes "the sight of twerking pre-teen bodies is explicitly designed to shock mature audiences into a contemplation of today's destruction of innocence" by creating "outrageous musical montages involving close-up crotch shots of pouting pre-teens," but that "Doucouré seems to want to provoke censure, but fails precisely because she's trying so hard."

But Netflix has vocally defended the film. “Cuties is a social commentary against the sexualization of young children,” a Netflix spokesperson said in a statement to TheWrap. “It’s an award-winning film and a powerful story about the pressure young girls face on social media and from society more generally growing up — and we’d encourage anyone who cares about these important issues to watch the movie.”

A few days later Doucouré penned an essay for The Washington Post responding to the backlash. "Some people have found certain scenes in my film uncomfortable to watch. But if one really listens to 11-year-old girls, their lives are uncomfortable," she wrote. "And that's why I made Cuties: to start a debate about the sexualization of children in society today so that maybe — just maybe — politicians, artists, parents and educators could work together to make a change that will benefit children for generations to come. It's my sincerest hope that this conversation doesn't become so difficult that it too gets caught up in today's 'cancel culture.'"

Now that Cuties is on Netflix, you can watch it and decide what you think for yourself.

More like this
12 ’90s Movie References You Missed In 'Do Revenge'
By Radhika Menon
13 Photos Of The 'Blonde' Cast Vs. Marilyn Monroe & Other IRL Counterparts
By Marina Watts
9 Movies & TV Shows That Prove Stanley Tucci Elevates Everything He’s In
By Jake Viswanath and Radhika Menon
Everything You Need To Know About The 'Knives Out' Sequel
By Bustle Editors
Get Even More From Bustle — Sign Up For The Newsletter