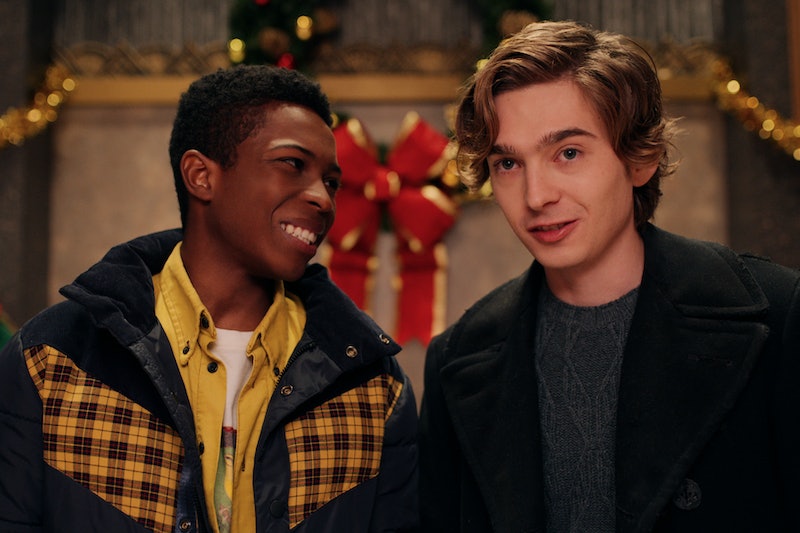 If you're looking to cure your 2020 blues with a heavy dose of holiday cheer, you're in luck. The upcoming Christmas-themed romantic comedy series Dash & Lily is coming to Netflix on Nov. 10. The show, created by Joe Tracz, is based on the YA novel series Dash & Lily's Book of Dares. It stars Austin Abrams and Midori Francis as the titular characters, two young people who fall in love over the holidays while trading a notebook filled with their dares and dreams back and forth across New York City.

But there's also another, more surprising, creator involved in the project: Nick Jonas, who serves as the show's producer. "Nick and I bonded over our mutual love of You’ve Got Mail, and we talked about wanting to make something that could capture that feel for a new generation," Tracz, who's also the showrunner, tells Bustle of Jonas' involvement. (The series is also executive produced by Stranger Things' Shawn Levy's 21 Laps Entertainment as well as Jonas' new production shingle Image 32.) "Having his involvement on casting, filming, and (especially) music was the ultimate Christmas gift."

When it comes to Christmas, the series is hoping to bring a little joy to viewers who may be experiencing a tamped-down holiday season due to the COVID-19 pandemic. "Dash & Lily is a celebration of New York at the holidays. It’s joyful and optimistic and I hope it can be an escape for people, especially right now," Tracz says. "But it’s also a story about seeing the world from someone else’s point of view, and looking for the good even when it’s hard. And those are things that I hope can resonate this year, too."

Above all else, Dash & Lily is a love letter to New York, with filming having taken place around the city (pre-pandemic). "Grand Central is one of my favorite places. Watching people come and go under the constellation ceiling always makes me feel connected to the city, so I knew we had to set a dare there," Tracz says of his experience filming the series. However, it was the series' main locale that was the most memorable. "Nothing beats filming overnight in the Strand – I think spending a night in a bookstore is every book lover’s dream."

With a charming and beloved YA story, a little New York Christmas magic, and a Jonas brother behind the scenes, Dash & Lily is definitely primed to brighten your holiday season when it makes its Netflix debut on Nov. 10. But if you can't wait that long, have a look at the first teaser below.

More like this
Netflix Reveals First Look At Wednesday In The 'Addams Family' Spinoff Series
By Bustle Editors
What’s New On Netflix: Ana De Armas’ 'Blonde' & A Nick Kroll Special
By Arya Roshanian
Here’s Everything Coming To & Leaving Netflix In October
By Jake Viswanath
What’s New On Netflix: Meet 'The Real Bling Ring'
By Arya Roshanian
Get Even More From Bustle — Sign Up For The Newsletter