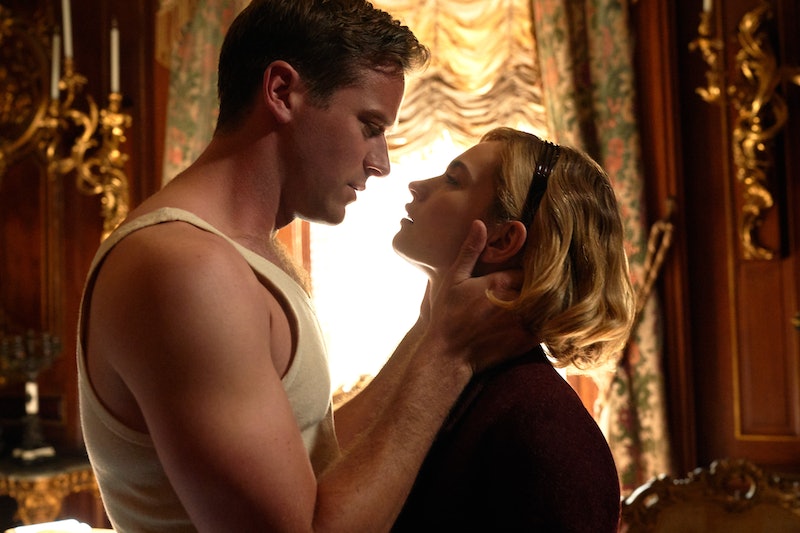 Take Call Me By Your Name, make it a straight love story, add in a mysterious death, potential ghosts, one terrifying house maid, and you have the newest Rebecca adaptation. The ominous trailer for Netflix's Rebecca trailer will make you doubt Armie Hammer — and fear for his fiancé's life (if not your own). And the film is premiering just in time to make it onto your Halloween watchlist.

Rebecca is the first adaptation of Dame Daphne du Maurier’s famous 1938 novel since Alfred Hitchcock's 1940 version of the psychological thriller, which won the Oscar for Best Picture. And based on the trailer, the new film seems to stay true to its source material. Lily James stars as a young woman (who remains unnamed) that falls for the dashing Maximilian de Winter (Hammer), or "Maxim," during a whirlwind trip to Monte Carlo. After accepting his marriage proposal, she's whisked off to his elaborate estate, Manderly, where she meets housekeeper Mrs. Danvers, who certainly has opinions about her boss' soon-to-be wife.

She quickly realizes that her picture-perfect fairytale is much more complicated, as Maxim's late wife Rebecca seems to haunt the estate, making her feel guilty for wanting to marry her former husband. But more than that, it makes the protagonist begin to question her new fiancé. He may be handsome, but that doesn't mean he's not threatening.

Although the trailer gives off a haunting gothic romance feel, it will still definitely provide audiences with some good Halloween terror. James admitted that she actually had panic attacks after filming the movie due to how the future Mrs. de Winter is treated in the film. "I found it really hard to let go of the character," James told Deadline in a December 2019 interview. "She’s really bullied and gaslighted, she lives in a difficult headspace. I kept having panic attacks after it finished, I couldn’t shake it off."

However, despite the creepy vibes of the trailer, director Ben Wheatley told Vanity Fair that he wanted to center his version of the story around the characters' love for each other, explaining that it's not a direct remake of Hitchcock's film. "I wanted to make something that had more love in it," he said in a Sept. 8 interview. "Rebecca has dark elements, and it has a psychological, haunting story within it, but it’s also about these two people in love. That was the main thing."

Rebecca will premiere on Netflix on Oct. 21.