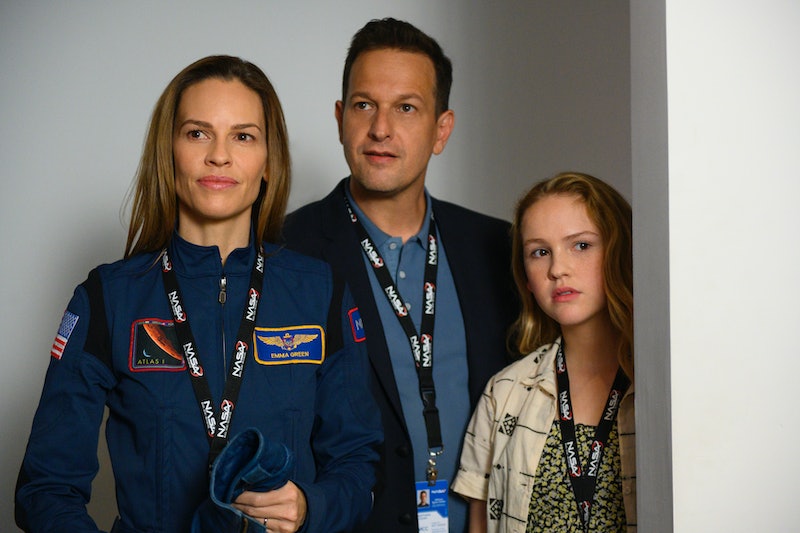 Prepare for an intergalactic sobfest, Netflix watchers. On Monday, Netflix released the trailer for Hilary Swank's Away, and it's clear the show is going to be an emotional experience, to say the least. Swank, a two-time Oscar winner, stars as Emma Green, a former Navy pilot, and commander of the first international space mission to Mars. Unfortunately, the mission requires astronauts to be away three years, which means Emma must leave her husband Matt (Josh Charles) and her teenage daughter Alexis (Talitha Bateman) behind on Earth.

Instead of focusing on the space travel itself, Away seems to be more about the human toll of exploration. In the trailer alone, Emma struggles with guilt over leaving her daughter, especially as her husband suffers a stroke. But of course, she's not alone in feeling disconnected from her family. The trailer also teases an international crew of scientists and astronauts, each with their own baggage. "Do you think you're the only one haunted by the sacrifices you made to get here?" a fellow astronaut asks Emma in the trailer. Before a mission, another space traveler adds: "We're all scared, but it's about having faith in each other."

Andrew Hinderaker created Away, along with Jason Katims, who was behind similarly sob-worthy shows Parenthood and Friday Night Lights, will executive produce the series. The Path creator Jessica Goldberg joins the show as showrunner as well.

Away is loosely based on a 2014 Esquire article with the same title, which profiled Scott Kelly, the first American astronaut to spend a year in space. Katims connected with the article and said that, despite not having tremendous prior knowledge of space travel, there was "something about this article that really gripped me," as per USA Today. He added that Kelly's story offered "a different way of thinking about space," more focused on "what the human experience was like to be away for so long, how to stay connected to the world, and what it does to your mind and body."

Hinderaker also found the article resonant, focusing on a section about how difficult it can be for an astronaut on the International Space Station when "something really catastrophic happens to his family" and the exploration of what that distance really means. The director, who is in a long-distance relationship with someone diagnosed with a progressive disease, said that he related deeply to "that moment of finding out that someone you love is in trouble and needs you and you're away working."

Now, with many people isolated from loved ones due to the COVID-19 pandemic, Katims said the show will, "resonate in a way that we had never imagined," as per Deadline. Many of the themes will seem newly familiar to viewers, including "not being able to be with people who are the most important to you," or "making the most important life decisions, but not being able to be with your husband or wife or child when doing it." The Away executive producer continued that the present moment reminds him of the show's core, which is about "the human spirit and more specifically when it’s tested." He added: "I think given the time we’re in, I’m really proud to be able to put this show out in the world right now.”