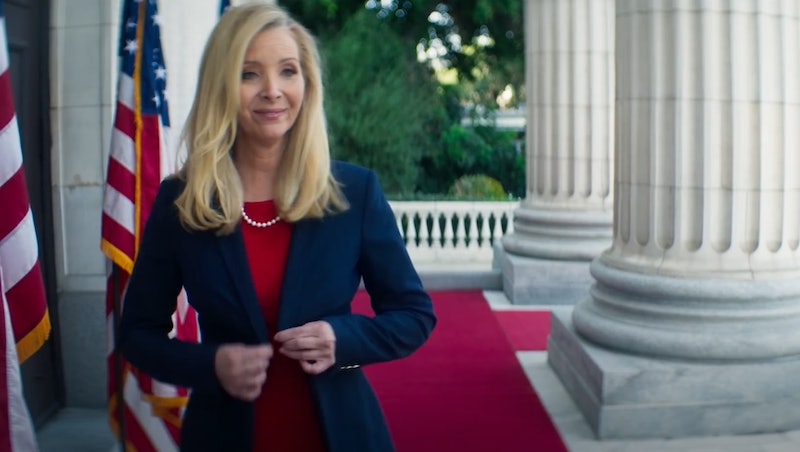 2020 has been like a long and haunting episode of Black Mirror, so is there a more appropriate way to end the year than with a documentary — nay, comedy special — inspired by the show? Series creators Charlie Brooker and Annabel Jones have joined forces again for Netflix's Death to 2020, which will give the past year the Black Mirror-inspired ending it deserves. Make no mistake, though: This isn't a new episode of the Emmy-winning show, but it does look a whole lot funnier and more star-studded.

The special includes portrayals of people from all walks of life, from real-life monarchs like Queen Elizabeth II (played by Tracey Ullman) to downright average citizens and soccer moms. But it's the behind-the-scenes characters who make the most impact, like Leslie Jones as behavioral psychologist Dr. Maggie Gravel, who delivers the most accurate line about this wretched year. "I'd say it was a trainwreck and a sh*tshow, but that would be unfair to trains and sh*t," she says in the trailer.

In a statement, Brooker explained that he wrote many comedy shows before creating Black Mirror and told fans not to take it too seriously. "Death to 2020 features fictional characters discussing real events in a bombastic mockumentary, but quite a bit sillier than that makes it sound," he said, according to Entertainment Weekly. "... Hopefully, viewers will find at least one joke to their liking — because let's face it, in 2020, any laugh you can emit, no matter how fleeting, is a small but precious victory."

In a November 2020 interview with Vulture, Grant teased his character and promised that viewers will love to hate him. "I am a historian who's being interviewed about the year," he said. "I'm pretty repellent, actually! And you'll like my wig."

Aside from the characters themselves being as awful as 2020, it seems the special won't let "the most historic year in history" go by unscathed. In addition to the coronavirus pandemic and the presidential election, the trailer also jabs at a (former) streaming service competitor: "So will this be on Quibi?" one character asks. To answer the question, no. Death to 2020 will premiere on Netflix on Sunday, Dec. 27, right in time to ring in 2021.