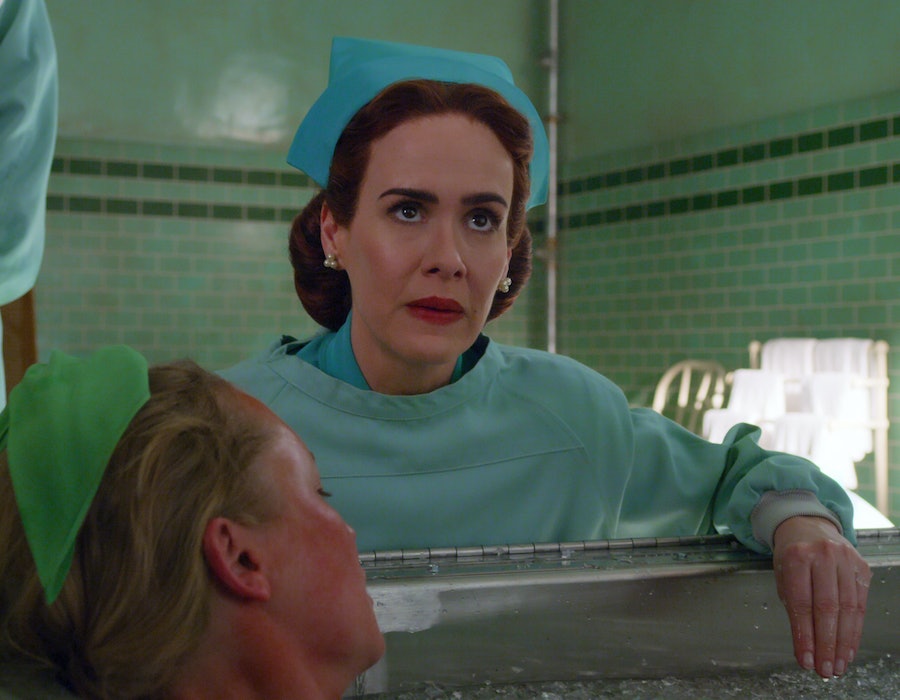 Ryan Murphy and Sarah Paulson are creating what looks like another storytelling masterpiece. First look photos of Netflix's Ratched starring Paulson in the leading role were released on July 29, along with details of when the fans can expect Season 1.

Ratched will tell Mildred's origin story, and hopes to explain to viewers how this professional woman became the cold-hearted asylum nurse fans know and fear from the 1975 Oscar-winning film, One Flew Over The Cuckoo's Nest. "I feel like Nurse Ratched is sort of a shorthand for barbarism," explained co-creator Murphy in a new interview with Vanity Fair. "She became like a catchphrase for any sort of institutional abuse of power. What was interesting was trying to create an emotional character from a reputation that's very cold." To that end, the series opens in 1947 — 16 years before the events of One Flew Over The Cuckoo's Next — with Mildred arriving in Northern California looking for a job at a leading psychiatric hospital that also is conducting "unsettling experiments" on the human mind.

Per the official drama description, she starts out as "the perfect image of what a dedicated nurse should be," but, once she enters her job in the mental health care system, "Mildred’s stylish exterior belies a growing darkness that has long been smoldering within, revealing that true monsters are made, not born." (The first look photos might not exactly seem to depict a monster, but they certainly do show off a "stylish exterior.")

Both Murphy and Paulson admitted to Vanity Fair that they were a little scared to pursue Mildred's story, but, in the end, Paulson found herself somewhat identifying with the nurse's loneliness. "I think ultimately at the end of the day, that is sort of what drives Mildred. A pursuit of survival and of finding some sense of home," she teased. "Even though the methods that she chooses to achieve that internal security are somewhat questionable, I would argue that she’s doing them with a potentially selfish need, but a survival need nevertheless. Sort of an animal need that blinds her to the inappropriateness of some her actions.”

The duo promised that fans of the movie would finally get a real understanding of the nurse's backstory, including a look into her childhood, relationships, and sexuality. "By the time you get to the end of the first season, you will not wonder how and why Mildred became the way she did," Paulson told Vanity Fair.

But it's clear based on the photos that Ratched won't just focus on Mildred, but also a whole cast of new, potentially threatening characters. The first look gave a sneak peek at the rest of the talented cast, including Sharon Stone, Cynthia Nixon, Judy Davis, Finn Wittrock, and Charlie Carver.

Along with the first look photos, Netflix also revealed that Ratched will premiere Friday, Sept. 18. Let the countdown begin.

More like this
'The Queen’s Gambit' Season 2 Tweet Wasn’t From Anya Taylor-Joy
By Mary Kate McGrath, Jack Irvin and Grace Wehniainen
Netflix Shut Down 'Bridgerton' S3 Rumours About A “Very Dark” Storyline
By Bustle
The OG Power Rangers Are Returning For A Spandex-Clad Special
By El Hunt
Anne Hathaway Shared A "Thrilling" 'Princess Diaries 3' Update
By Darshita Goyal
Get Even More From Bustle — Sign Up For The Newsletter
From hair trends to relationship advice, our daily newsletter has everything you need to sound like a person who’s on TikTok, even if you aren’t.