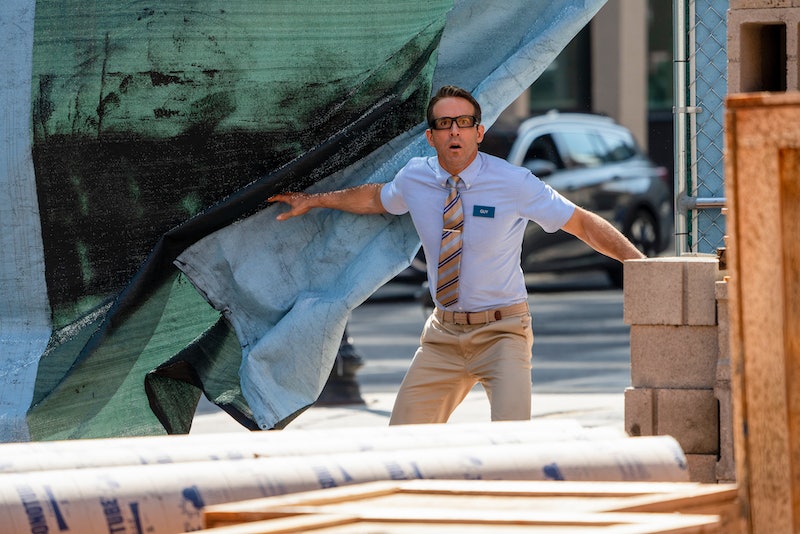 The coronavirus pandemic has caused long-lasting delays in the movie industry, with blockbuster films that were due to be released in the fall, like No Time to Die and Black Widow, getting pushed all the way to 2021. However, a new blue shirt-wearing hero, a.k.a. Ryan Reynolds, is coming to give fans something to watch in theaters this year — we think. As revealed in the new Free Guy trailer, Reynolds is hoping for a 2020 release date. But, just to be safe, the cast also rehearsed promoting other release date announcements.

In the new action film, Reynolds stars as Guy, a bank-teller who is entirely unaware that he is in fact a background character of a popular video game called Free City and only finds out when he gets sick of living his ordinary life — which consists of talking to his goldfish and dying repeatedly (and in various awful ways). As he starts changing the rules of the game, however, those in the "real" world take notice, and threaten to shut down the game entirely.

The film also stars Jodie Comer as Guy's mysterious bad-ass love interest (who's actually an active player of the game), Lil Rel Howery as Guy's police officer best friend, and Taika Waititi as a developer who sees what Guy is doing and tries to shut down the game for good.

The film is currently set to be released in theaters on Dec. 11, 2020. However, as shown in a teaser released on Oct. 4, Reynolds and the cast are prepared for another delay, giving soundbites for various release dates including Christmas, Valentine's Day, "a July 4th," and Pinecone Appreciation Day (no, this does not exist). When the film actually ends up coming out, Reynolds and director Shawn Levy will be excited to bring audiences an entirely original blockbuster action film. “To be making a tent pole — no prior branding, not a small budget movie — in 2019 at Disney is daunting, but also pretty exciting,” Levy told Nerdist during a set visit. "It’s rare that anyone does it anymore."

More like this
Lin-Manuel Miranda & Tituss Burgess React To 'Little Mermaid' Casting Backlash
By Radhika Menon
Netflix Reveals First Look At Wednesday In The 'Addams Family' Spinoff Series
By Bustle Editors
Nicola Coughlan Shared A Lady Whistledown Excerpt From ‘Bridgerton’ Season 3
By Grace Wehniainen, Alyssa Lapid and Sam Ramsden
Everything To Know About 'RHONJ' Season 13
By Brad Witter and Jake Viswanath
Get Even More From Bustle — Sign Up For The Newsletter