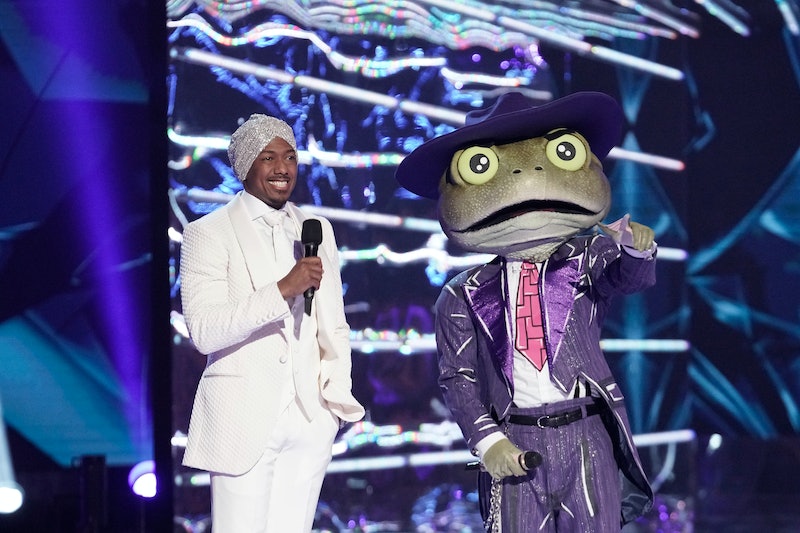 Despite being let go from previous business ties with Viacom, Nick Cannon will remain host of The Masked Singer, FOX announced on July 15. The news comes after Cannon apologized for recent anti-Semitic remarks he made on his podcast, an apology which itself came after a reported refusal to apologize earlier in the day. In a statement obtained by Bustle, FOX made it clear that they don't accept any form of "hate directed toward any community." But, after having a conversation with Cannon, they have decided to move forward with their working relationship.

"When we were made aware of Nick Cannon’s interview with Richard Griffin on YouTube, we immediately began a dialogue with Nick. He is clear and remorseful that his words were wrong and lacked both understanding and context, and inadvertently promoted hate," FOX's statement reads. "This was important for us to observe. Nick has sincerely apologized, and quickly taken steps to educate himself and make amends. On that basis and given a belief that this moment calls for dialogue, we will move forward with Nick and help him advance this important conversation, broadly. FOX condemns all forms of hate directed toward any community and we will combat bigotry of any kind."

Cannon also issued a lengthy apology on Wednesday evening on Twitter. "First and foremost I extend my deepest and most sincere apologies to my Jewish sisters and brothers for the hurtful and divisive words that came out of my mouth during my interview with Richard Griffin," he wrote. "They reinforced the worst stereotypes of a proud and magnificent people and I feel ashamed of the uninformed and naïve place that these words came from." He added that he has since removed the video of his conversation with Griffin from his platforms and promised, "my Jewish friends, new and old, that this is only the beginning of my education."

His apology came after ViacomCBS ended its relationship with Cannon on July 15, after anti-Semitic comments he made in a June 30 episode of his Cannon's Class podcast went viral. While interviewing Public Enemy rapper Professor Griff (who left the group after making anti-Semitic remarks, but later rejoined), Cannon called Black people the "true Hebrews" and even discussed conspiracy theories about the Rothschilds, a family of famous bankers who have long-been targets of anti-Semitic rhetoric, according to CNN. Cannon went onto say, "It’s never hate speech, you can’t be anti-Semitic when we are the Semitic people. When we are the same people who they want to be. That’s our birthright. We are the true Hebrews."

"ViacomCBS condemns bigotry of any kind and we categorically denounce all forms of anti-Semitism," a ViacomCBS spokesperson told Variety in a statement about terminating their relationship with Cannon. The rep added in part, that they had discussed the issue with the actor, but that he had "failed to acknowledge or apologize for perpetuating anti-Semitism."

Before officially apologizing for his comments, Cannon took to Twitter on July 13 where he said he doesn't have "hate in my heart nor malice intentions." He also wrote, "I do not condone hate speech nor the spread of hateful rhetoric. We are living in a time when it is more important than ever to promote unity and understanding." In a second tweet, Cannon said he holds himself "accountable" and also takes "full responsibility." However, a few days later, he shared a lengthy message on Facebook, after Viacom announced they were severing ties with him, seemingly doubling down on his original comments. "I don’t have to defend myself here, the proof is in the history," he wrote in part. He later qualified his apology, adding, "If I have furthered the hate speech, I wholeheartedly apologize."

The Masked Singer host concluded his post by demanding an apology from ViacomCBS. "If I have furthered the hate speech, I wholeheartedly apologize," he wrote. "But now I am the one making demands. I demand full ownership of my billion dollar 'Wild ‘N Out' brand that I created, and they will continue to misuse and destroy without my leadership! I demand that the hate and back door bullying cease and while we are at it, now that the truth is out, I demand the Apology!"

More like this
We Finally Have Some Answers To How Heather Gay Got A Black Eye On 'RHOSLC'
By Samantha Rollins
Hannah Ann Got Engaged 3 Years After 'The Bachelor' & The Proposal Was Dreamy
By Grace Wehniainen
10 Photos Of The Wildest Limo Arrivals From 'The Bachelor' Premiere
By Brad Witter
This Pre-'Love Island' Video Of Olivia & Zara Together Changes Everything
By Bustle UK
Get Even More From Bustle — Sign Up For The Newsletter
From hair trends to relationship advice, our daily newsletter has everything you need to sound like a person who’s on TikTok, even if you aren’t.