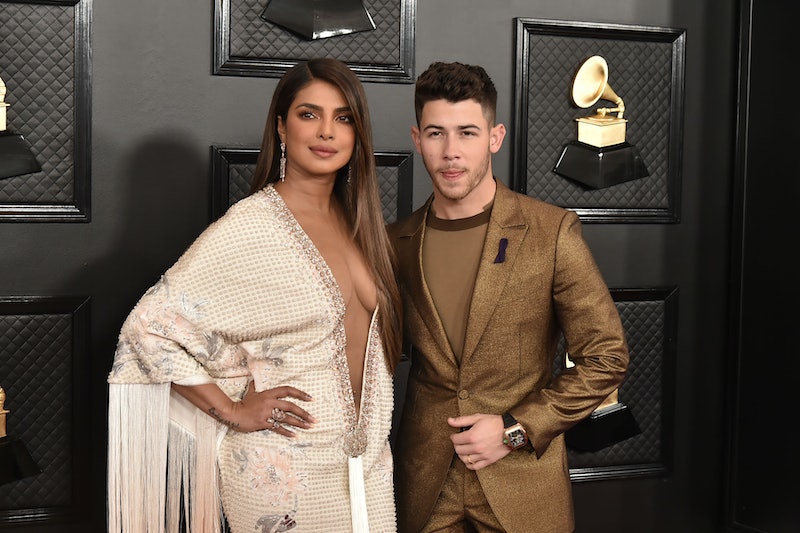 The Chopra-Jonas family have welcomed a new addition: Panda. On Saturday, August 8, Nick Jonas and Priyanka Chopra announced they adopted a puppy in a post on Jonas' Twitter and Instagram, and their announcement had their social media followers completely confused. "Welcome to the family Panda!" Jonas wrote, along with two photos of their new furry friend. "Panda is a Husky Australian Shepard mix rescue and we’re already in love," he added.

However, while his followers mostly seemed to be just as in love with the new puppy as Jonas and Chopra are, they were also somewhat confused over his decision to apparently photoshop another one of their dogs, Diana, into a family photo. In the snapshot — which Jonas posted alongside a solo shot of Panda — the singer holds his new puppy while Chopra pets their German Shepard, Gino; in the lower left corner, a picture of the actor's beloved dog Diana appears to be awkwardly pasted in to complete the family photo. "The @diariesofdiana edit is amazing," Jonas' older brother, Kevin, commented on the post.

Chopra appeared to address the awkward nature of Diana's cameo on the pup's Instagram page. (Both Gino and Panda also have their own social media presences, because they're just that photogenic.) "One big happy family," she captioned the photo, along with a red heart emoji. "Yes! I am photoshopped into this image. Had a busy day when it was taken."

Panda is the third pet that Chopra and Jonas have gotten since they started dating in 2017. For their first anniversary, the Quantico alum surprised her husband with Gino. "I had mentioned it two weeks prior to when she actually got the puppy for me," Jonas recalled during an appearance on The Late Late Show in December 2019.

"We were talking about this new house we got and we're very excited to move in and everything else, and I said, 'And you know, we can get a German Shepard!' And she thought I knew somehow about the surprise." After Chopra pretended not to be interested in getting another dog, Jonas said he didn't think anything more about the discussion. "I put it out of my mind, I forgot about it. And then, I woke up to Gino, my new puppy.'"

As for whether or not the couple are looking to expand their family even further with the addition of children, Jonas and Chopra are in no rush to have a baby. "I've wanted to experience motherhood since when I was 12 years old," she told E! News in October 2019, just ahead of their one-year anniversary. "I love kids, I've always wanted to have them. And whenever it's time, I'm sure it will."

In the meantime, however, the couple are happy to just enjoy married life. "Every single day when I wake up I'm like, 'Oh, I have a home. Like this is my home. This person is my home,'" Chopra said. "And I didn't know that feeling outside of my parents. It's like, 'Oh, this is the family that I have chose.'" Now Panda will get to experience that same sense of belonging — hopefully with Diana in the same room at some point.