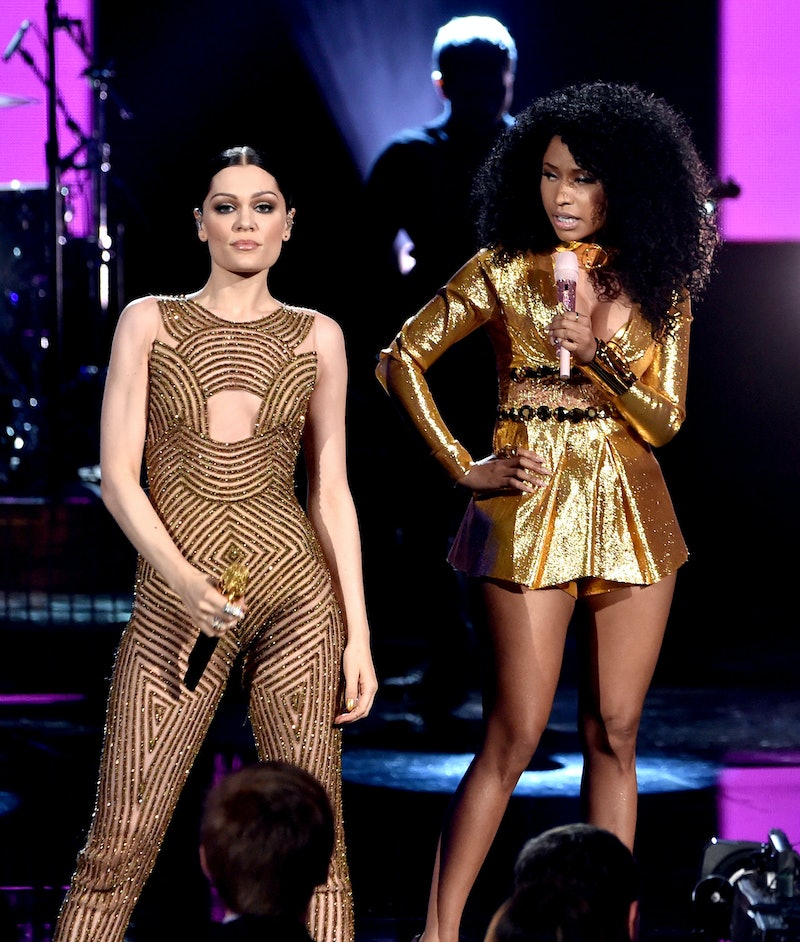 A years-old song recently stirred up new drama. After Jessie J discussed the origins of 2014’s “Bang Bang” for the Aug. 5 installment of Glamour’s “5 Songs, 5 Stories” series, her collaborator Nicki Minaj and many Barbz took issue with her portrayal of events. The dispute inspired a flurry of responses on social media, including from both of the artists at the center of it.

Revisiting “Bang Bang,” Jessie J recalled collaborator Minaj asking to join her and Ariana Grande on the Grammy-nominated track. “Nicki was played it in the studio and was like, “I’ve got to jump on this,” she told Glamour. “We didn’t go to her and ask; she wanted to do it.”

Minaj remembered things differently, however, and she called out Jessie J in a tweet later the same day. “Babe @JessieJ I didn’t hear the song & ask 2get on it,” she wrote. “The label asked me2get on it & paid me. How would I have heard the song?” The “Trollz” rapper went on to ask if she’s the “damn song monitor” who’s “snoopin around for songs,” noting something similar “was said by another artist” recently also. Still, she ended on a positive note, adding, “LoveU.”

Barbz were quick to stand with Minaj. “The narrative that Nicki goes around asking to feature on songs has been used to discredit her GOAT status,” one fan wrote in part. Another person tweeted, “U have every right to speak your truth or correct someone, it’s not harming anyone.”

Yet another fan pulled up an old interview clip and shared it on Instagram, writing that “it concludes THE LABEL DID ASK @nickiminaj to be on the song.” The clip also shows Jessie J saying she had “tried to get Nicki on ‘Do It Like a Dude,’ and that never happened.” Responding to the post, Minaj tweeted, “The worst part about this is no1EVER asked me2get on ‘like a dude’ & I have been obsessed w|that song since the min I heard it.”

Seeing the blowback, Jessie J addressed their “weird energy” and publicly apologized to Minaj (as well as Grande) in a lengthy Aug. 6 Instagram caption. While it read as snarky in some parts, others appeared to be more sincere. “I’m sorry I got the story wrong all these years [later],” the “Price Tag” singer wrote, noting she respects Minaj for publicly being herself. “I was told you heard the song and wanted to be on it by someone clearly gassing me up at the label. (Bless them and my naive ass) Thank you for clarifying I was wrong on that.”

She went on to share her admiration for both of her “Bang Bang” collaborators, writing, “From the moment I met you to now I have shown you nothing but love and gratitude for how f***ing blessed I was to have you and @arianagrande ... ‘I felt like I had won a competition’ did back then and still do now.” Jessie J further explained that she’d only recently learned the “wild” fact that Grande co-wrote the song with Max Martin, and she’s the “first person to admit Bang Bang would NEVER have been what it was” without her and Minaj.

In honor of the song’s seventh anniversary, Jessie J also (maybe) jokingly suggested she, Grande, and Minaj go out for dinner to celebrate — or even collaborate again. “Probably not right.. Too soon?” she wrote. “Bang bang part two?… No…. Ok got it. Do it like a dude remix? Ok. I’ll stop.”

Amid her jokes about the awkward situation, Jessie J asked what the point is if “we cant laugh in the lives we have been blessed with”? She added that “it really isn’t that deep.” In fact, she’s found one silver lining in the midst of their beef: the series of memes — including one of Minaj using her “as a stair rail” during their 2014 American Music Awards performance — that kept her “entertained all day.”

“Look, the song did it’s damn thing. I will never say you asked to be on the song ever again,” Jessie J wrote to Minaj, before concluding, “Always love and light from me babes.”

If they’re ready to put the feud to bed, can we really get that remix sometime?

More like this
The Ticketmaster Senate Hearing & Taylor Swift Tickets Debacle, Explained
By Jake Viswanath
Brad Pitt Wants To Share The Spotlight With This Celeb In Shania Twain’s “That Don't Impress Me Much”
By Alyssa Lapid
Harry Styles Is Performing At The 2023 Grammy Awards
By Jake Viswanath
Adam Levine & Behati Prinsloo Welcome Their Third Child Together
By Jake Viswanath
Get Even More From Bustle — Sign Up For The Newsletter
From hair trends to relationship advice, our daily newsletter has everything you need to sound like a person who’s on TikTok, even if you aren’t.