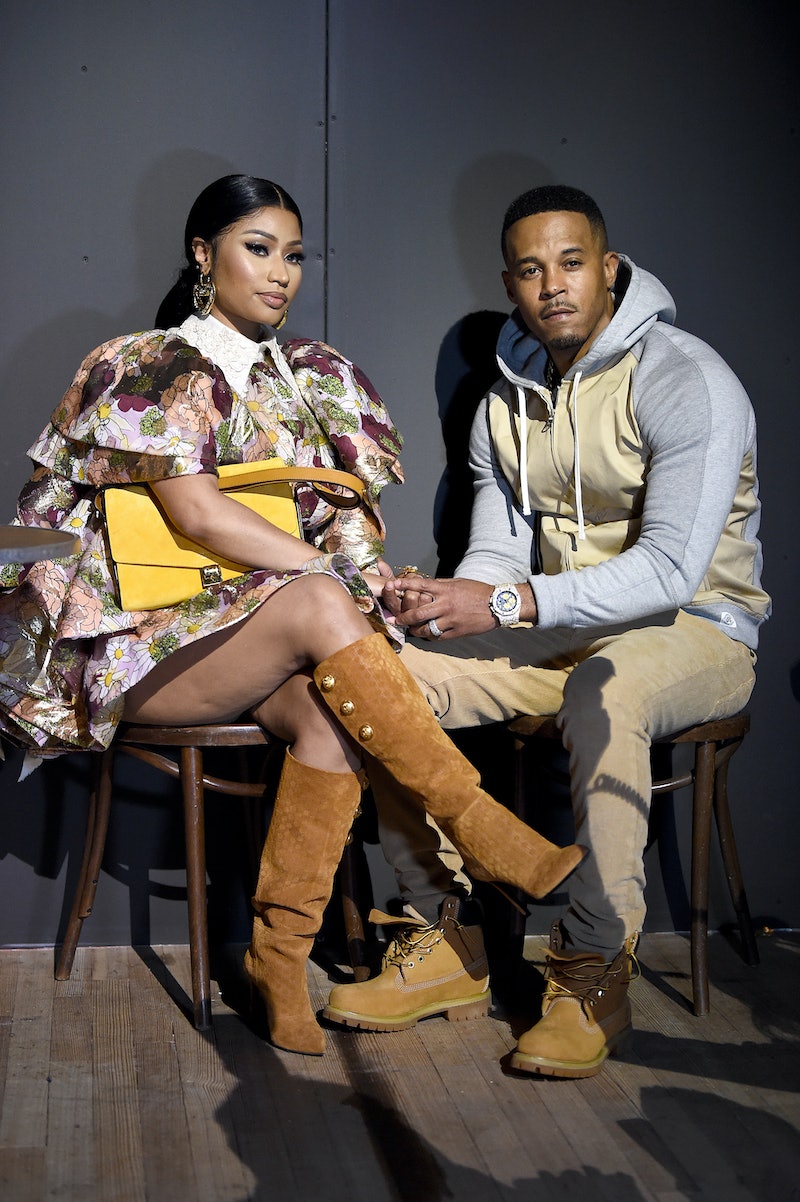 The Barbz are about to get a very special new member: Nicki Minaj is pregnant with her first child. The rapper announced the news on Instagram with some new photos taken by Alex “Grizz” Loucas that showed off her baby bump — and featuring wearing blinged-out bikinis, colorful wigs, and sky-high pearl heels, in typical Minaj fashion. The exciting news comes nine months after Minaj announced that she married Kenneth Petty, who she had been dating for about a year. Bustle reached out to representatives of Minaj for additional comment.

The rapper initially kept her announcement mysterious, captioning her first photo with a simple "#Preggers" and leaving her second photo caption-less. But, in her third post, Minaj opened up about how grateful she was to welcome her first child. "Love. Marriage. Baby carriage," she wrote. "Overflowing with excitement & gratitude. Thank you all for the well wishes."

Minaj has been open about her desire to have a baby for years, even announcing that she was retiring from music to start her family in September of 2019. "I've decided to retire & have my family," she wrote on Twitter, as per PEOPLE. "I know you guys are happy now. To my fans, keep reppin me, do it til da death of me … Love you for LIFE."

Of course, the rapper has not stuck to her word. After deleting the retirement announcement tweet, Minaj went on to release a new single, "Yikes," in February 2020. Recently, she also achieved her first two number one singles on the Billboard Hot 100, via features on Doja Cat's smash hit "Say So" and 6ix9ine's "Trollz." In fact, some fans began to suspect that she was expecting because of her appearance in the "Trollz" music video. She also teased her pregnancy in a series of tweets back in May, where she described experiencing common symptoms like nausea and cravings.

Minaj has known husband Petty since childhood and dated him when she was only 16 years old and living in Queens, before her career took off, according to TMZ. After their teenage romance, according to New York Division of Criminal Justice Services records, Petty was convicted for the attempted rape of a 16-year-old in April 1995. He also pleaded guilty for manslaughter in 2002 and served seven years in prison, as confirmed by The Blast. However, as reported by TMZ, Minaj was "confident he's matured" over the years before committing to him once again and starting their family.

More like this
Now That 'Renaissance' Is Here, Let’s Revisit Beyoncé’s First Solo Album From 2003
By Grace Wehniainen
Beyoncé Is The First Woman To Have A No. 1 Album Since Adele Did Almost A Year Ago
By Radhika Menon
Lauv Is No Stranger To Taylor Swift, Drake, Ed Sheeran, & Fame
By Alyssa Lapid
Beyoncé Sent Flowers To “Masterpiece Genius” Madonna After The “BREAK MY SOUL” Remix
By Grace Wehniainen
Get Even More From Bustle — Sign Up For The Newsletter