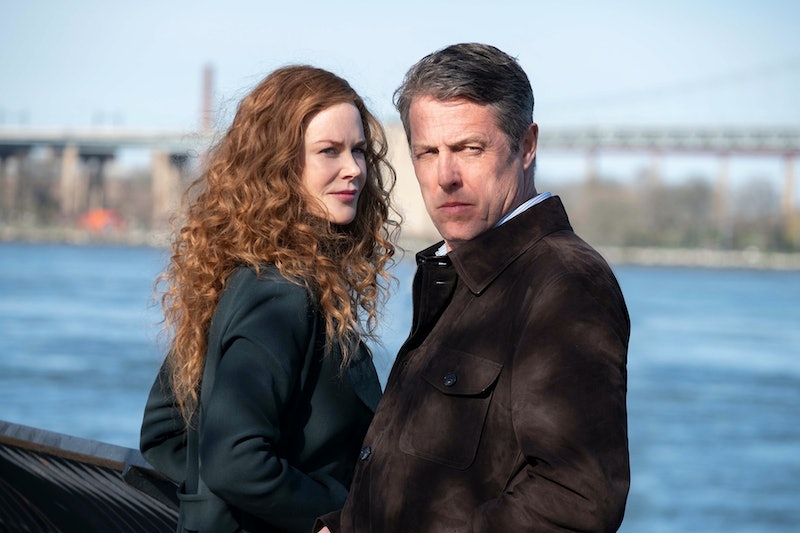 When it comes to chilling, stare-into-your-soul drama, Nicole Kidman is your go-to woman. Fresh from her Emmy and Golden Globe-winning turn in Big Little Lies, the actor is soon to star in new series The Undoing. And, from first impressions, it's as intense as you'd expect. The first-look trailer is set to an anxiety-inducing, heartbeat soundtrack — with breathy phone calls, blood splatters, and intense staring for good measure.

Exclusive to Sky, the new series promises "a chain of terrible revelations" when it debuts October 26 on Sky Atlantic and NOW TV.

Kidman stars as Grace Fraser, a successful therapist married to seemingly devoted husband Jonathan, played by Hugh Grant. Their son also attends a top New York High School (think Gossip Girl). They appear to have a perfect life yet, true to the genre, perfect doesn't last long. As the show's website reads, overnight, there's a "violent death"," a missing husband", and a "suspicious affair" that throws Grace's life into chaos.

The first short trailer, released via HBO in March, also teases to "ugly truths" of the "rich " and "entitled" as Kidman's character deals with a very public disaster. A longer trailer, released in September, reveals a little more. Grace appears to be a prime suspect, or at least complicit with her husband, when a mother if found bludgeoned to death. “Murder is ugly business,” a prosecutor says to a jury. “I must warn you, whatever you’ve heard, it’s worse than you think.” Interspersed with dramatic clips of the courtroom and violent fits, The Undoing has serious Big Little Lies vibes. The show is also produced by David E. Kelley, the award-winning creator behind Big Little Lies.

Speaking to Glamour, Kidman said of the role "David has created another propulsive series with a fascinating, complicated female role at its center.” Complicated females are characters Kidman seems to play best, yet with the gamut of top-ranking thrillers out lately, it'll be interesting to see how this psychological thriller holds up. Regardless, I'm braced for another healthy dose of Kidman in fine form.

The series is based on novel You Should Have Known by Jean Hanff, a New York Times best-selling novel. While its release date was held back due to the pandemic, it's set to land October 26 on Sky Atlantic and NOW TV.

More like this
You’ll Most Definitely Recognise Kyle Pryor’s Soap Star Girlfriend
By Sophie McEvoy
Kate Winslet Spoke Candidly About Filming A TV Series With Her Daughter
By Sabah Hussain and Sam Ramsden
Our First Look At 'Vardy V Rooney: A Courtroom Drama' Doesn’t Disappoint
By Bustle UK
Ciarán Griffiths Is Making His 'Corrie' Comeback
By Catharina Cheung
Get The Very Best Of Bustle/UK