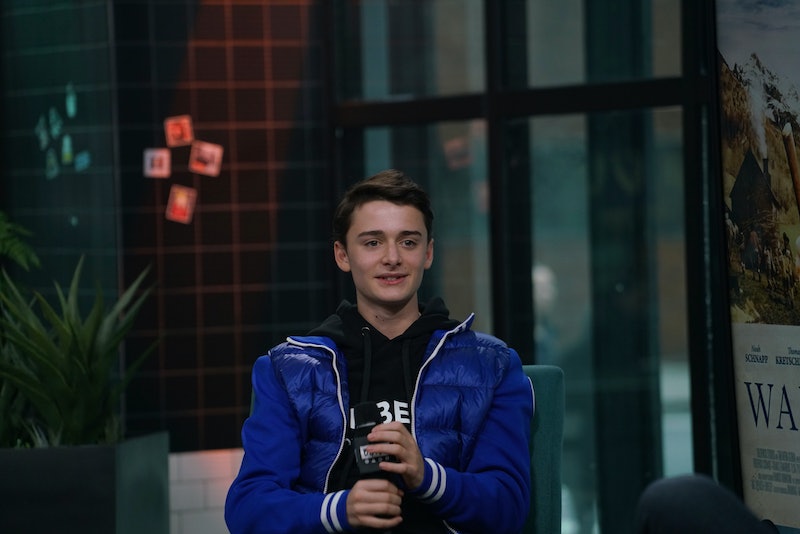 The Stranger Things kids are growing up, and in some cases, that means reckoning with past behavior. Noah Schnapp has apologized after he was accused of singing the N-word in a viral video. The Stranger Things star was trending on Twitter on Tuesday, Aug. 25, after an old video of him and some friends singing Lil Dicky and Chris Brown's collaboration "Freaky Friday," which features many usages of the racist slur, was posted on his friend's Instagram account before getting quickly deleted.

The verse that Schnapp is shown singing starts off with the lyric, “Wait, can I really say the N-word?" before repeating the slur several times in various different contexts. In a letter posted to his Instagram Story, Schnapp denied the accusations, explaining that the video was taken last summer, when he was 14 years old, and insisted that he was singing the word "neighbor" over the actual lyrics.

"Hi guys. Recently a video from last summer has gotten out of me dancing and singing a song while singing the word ‘neighbor’ over the N-word," he wrote. "I would truly never say the N-word and I'm not the type of person. I genuinely have never used that word in my life. Using the word ‘neighbor’ in that song was just something my camp friends and I did." He continued, insisting that he would never consider using a slur. “I hope you all understand I could never even think about doing that," he said. "My friends also would never post a video, or support me, if I was saying that slur without hesitation."

Despite his denial, Schnapp acknowledged that he shouldn't have replaced the slur, and should have ignored the lyrics outright. "I apologize for using a replacement word. It is not my place to use one and I should of kept my mouth shut. I understand why it is found offensive and I am so sorry.”

This is not the first time that Schnapp has found himself in hot water online. Last month, the actor took to Twitter to address claims that he was friends with the owner of a controversial Instagram fan account who had reportedly shamed his Stranger Things co-star Millie Bobby Brown, among other things. "Some of u guys feel like ur feelings are being invalidated. which I'm sorry for," he wrote. "I never meant to defend anybody['s] actions.” He also clarified that he smoothed things over with Brown, calling her his "best friend" and saying she wasn't offended.