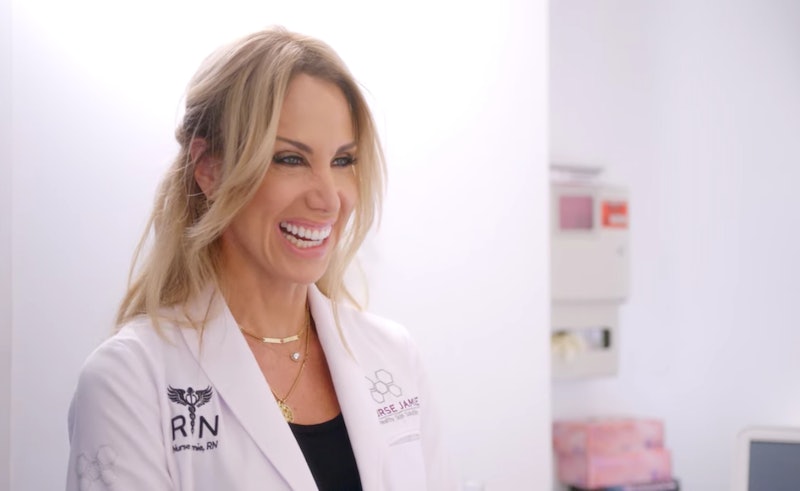 Netflix's new makeover show, Skin Decision: Before & After, may be centered around plastic surgeon Dr. Sheila Nazarian's practice in Beverly Hills, but Nurse Jamie Sherrill also plays a significant role. Whereas Nazarin is the surgery expert, Nurse Jamie "[enhances] people's beauty without using a scalpel," as she explains in the series.

According to Nurse Jamie's website, she owns Beauty Park Medical Spa in Santa Monica, where she treats celebrity clients. She also has an eponymous line of skin care beloved by stars including Hilary Duff, Jessica Alba, Jonathan Van Ness, Reese Witherspoon, and Riverdale star Camila Mendes. Kim, Kourtney, and Khloé Kardashian even visited her office in an episode of Keeping Up with the Kardashians.

"We prepped the spa for a week to make sure it was sparkling inside-out," Jamie told Coveteur in 2018. "There were so many paparazzi and people that you couldn't tell what the place even was. They were here for almost two hours, and it became mayhem. I have never seen anything like it."

Before venturing to Hollywood, Jamie grew up in Indiana "pre-iPhone era," which meant that fashion magazines were her "only connection to the latest skin care and makeup trends," she told Coveteur. She started her career working for a dermatologist when she was 18. "He was a pioneer in laser therapy, and we were a test site for the largest laser company in the world — at that time, nobody was using lasers — so I learned the importance of innovation in aesthetic medicine," Jamie explained.

Now, she runs a veritable skin care empire. She's also worked as a consultant on programs like The Today Show and dabbled in acting, having appeared on soap operas like The Bold and the Beautiful, Days of Our Lives, and The Young and the Restless. Plus, she's a mom to triplets, and according to E! News, reportedly began dating singer John Cougar Mellencamp in April. If his skin starts to look better than ever, we'll know why.