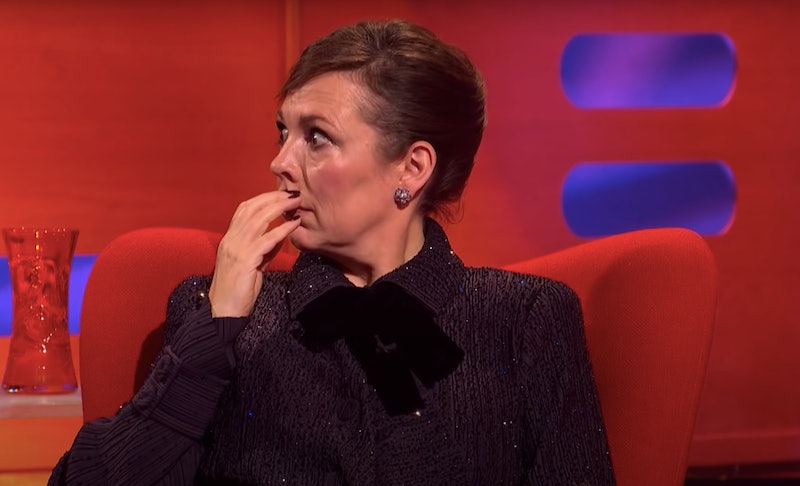 During an appearance on The Graham Norton Show on Dec. 10, Oscar-winning actor Olivia Colman did what she does best and accidentally delivered a hilariously shady comment at comedian Jack Whitehall that left the audience in uncontrollable giggles.

Norton always seems to attract serious acting royalty to his show and last Friday was no different. Colman and Whitehall were joined by Wicked’s Cynthia Erivo on the big red seats. During his interview, Whitehall plugged his latest movie, Clifford the Big Red Dog.

“This is a breakthrough role for you Jack because you have an American accent,” said Norton. Jack smiled and nodded and said, “Yes, I was doing an American accent.” However, Colman had a couple of questions for the comedian.

“What, in that clip?” she asked, to which Whitehall replied, “Yes! Olivia!” He went on to joke that he could “feel the Oscars buzz fizzling away!”

What Colman meant by her question, the actor had Norton, Erivo, and the studio audience in an uproar of laughter.

Whitehall explained that Colman and his fellow panellists might not be able to pick out a regional dialect in his accent because he wanted to include them all. “You see, what a lot of actors do when they’re doing an American accent is they tend to just go for one region of America and commit to a single American accent,” he said. “I decided with this role that I would take it around all 50 states, sometimes in the same scene.”

Shortly after the broadcast, the clip made its way to Twitter and fans were LIVING for Colman’s blunt delivery. “Reason 13424 why we love Olivia Colman…” one person wrote. Another said, “I need a whole show of Olivia just accidentally roasting people.”

More like this
'Doctor Who’s New Star Is Already Huge On TikTok
By Maxine Harrison
We’ve Got A Text! 'Love Island' 2022 Finally Has A Release Date
By Sam Ramsden and Frances Stewart
BBC Three Is Launching A New Gay Reality Dating Show
By Sophie McEvoy
'Dubai Hustle' Is BBC Three’s Answer To 'Selling Sunset'
By Catharina Cheung
Get The Very Best Of Bustle/UK