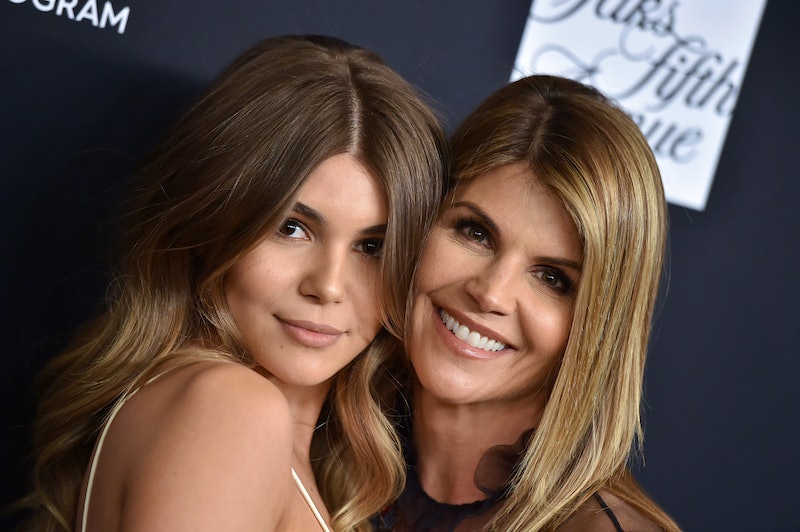 It's been more than a year since the college admissions scandal, and Lori Loughlin's daughter is finally speaking out. On Tuesday, Dec. 8, Olivia Jade sat down for an episode of Red Table Talk on Facebook Watch, marking her first public appearance since her parents, Loughlin and Mossimo Giannulli, pleaded guilty to conspiracy charges. During the interview, Olivia told hosts Jada Pinkett Smith, Adrienne Banfield-Norris, and Willow Smith about how she initially came to terms with the news, what she has learned since, and why she "wasn't angry" with her parents.

Olivia first found out about the scandal while on spring break in March 2019. After receiving a call from a friend asking if she had spoken to her mom, the influencer searched Google only to discover her parents' involvement in the scandal. "I was sitting with a group of friends," she recalled. "I knew any second, everyone was going to know too if they didn't already. I remember freezing and feeling so ashamed, I went home and hid myself for probably three or four months."

Loughlin and Giannulli were among more than a dozen high-profile parents involved in the infamous college admissions scheme, which also included fellow actor Felicity Huffman. The couple paid $500,000 to scandal ringleader William "Rick" Singer — who posed as a college counselor — so that Olivia and their younger daughter Bella would be admitted to the University of Southern California. The sisters were accepted to the school as recruits for the crew team, even though neither of them had ever participated in the sport. Loughlin and Giannulli both pleaded guilty to one count of conspiracy to commit wire fraud and mail fraud. Loughlin was sentenced to two months in prison, while Giannulli received a six-month sentence.

The former YouTube star said she was so embarrassed that she didn't return to USC after spring break, acknowledging that she "shouldn't have been there in the first place, clearly." She also admitted that she didn't really have a "good understanding" about the extent of her family's actions at first. "To be honest, I wasn't angry," she said. "100 percent honesty, when it first happened, I didn't look at it and say, 'Oh my god, how dare we do this?' I was like, 'Why is everybody complaining? I'm confused about what we did.' That's embarrassing to admit."

Olivia also revealed that she wasn't totally aware of what the "college counselor" did to get her admitted, describing discrepancies in the college essay that she wrote and the false application that was given to the school. Still, she apologized for her own role in the scandal. "What hasn't been super public is that there is no justifying or excusing what happened because what happened was wrong," she said. "I think every single person in my family can be like, 'That was messed up, that was a big mistake.'"

In the year since the scandal broke, Olivia said that she has become more aware of her white privilege. It's her family's privilege, after all, that allowed Loughlin and Giannulli to believe they could pay off a university in exchange for their daughters' admittance. "I just want to apologize for contributing to these social inequalities, even though I didn't realize it at the time," she said.

Inevitably, life hasn't been easy for the 21-year-old social star in the wake of her parents' crimes. According to Olivia, she hasn't spoken to her parents since they began their prison sentences this fall. "It's been hard," she said. "I think for anybody no matter what the situation is, you don't want to see your parents go to prison. But also I think it's necessary for us to move on and move forward."