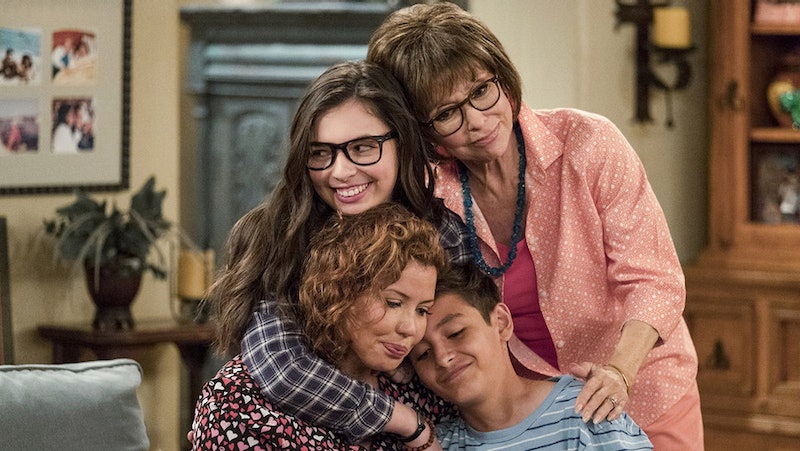 The third time was not the charm for One Day At A Time. Pop TV picked up the show from Netflix after the streaming giant scrapped the series in 2019, but the network decided against completing the abbreviated fourth season and ordering a fifth. After Sony Pictures TV tried to secure another deal for the beloved comedy, co-creators Gloria Calderón Kellett and Mike Royce confirmed One Day At A Time is "officially over." Just like after the first cancellation, devoted fans have suffered a major blow.

Calderón Kellett took to Twitter to share the news, writing, "There will be no new @OneDayAtATime episodes." She continued, "But there will always be 46 episodes that we got to make that live FOREVER. Thank you to this beautiful cast. Our dedicated crew. And to you, our loyal fans. We loved making this for you. Thank you for watching."

Royce echoed her sentiment in a letter posted to Twitter, thanking the cast, crew, and most importantly, the fans. "The only silver lining about not doing a show anymore is that nobody can take away the show you already did," he wrote. "[Four] seasons that will forever exist for people to watch... While I'm sad today, I'll forever be grateful for the amazing experience and honor it was to work on it. And the biggest thank you is to the ODAAT fans, who gave us more love than we know what to do with."

ODAAT starred Justina Machado, Todd Grinnell, Isabella Gomez, Marcel Ruiz, Stephen Tobolowsky, and the legendary Rita Moreno. Many of them have also taken to social media to pay tribute to the show. Machado re-tweeted Royce's letter and said she couldn't have written it better herself. "Love you familia," she added. "Familia para siempre." As the news continues to sink in, fans have turned to Twitter to express their sadness.

Others have spent time reflecting on how the show is one of the few that feature Latinx and Hispanic representation, as well as a positive depiction of queerness and accurate portrayals of dealing with depression. Another question that must be answered: How does one justify canceling Moreno?

In short: This news blows, and it's safe to say fans would be delighted if ODAAT were to find a new home.

More like this
Netflix Reveals First Look At Wednesday In The 'Addams Family' Spinoff Series
By Bustle Editors
Nicola Coughlan Shared A Lady Whistledown Excerpt From ‘Bridgerton’ Season 3
By Grace Wehniainen, Alyssa Lapid and Sam Ramsden
Watch The Thrilling Teaser Trailer Of 'Shadow And Bone' Season 2
By Gretchen Smail, Jack Irvin and Sophie McEvoy
A New 'And Just Like That' Table Read Pic Confirms A Key Character's Return
By Jack Irvin and Grace Wehniainen
Get Even More From Bustle — Sign Up For The Newsletter