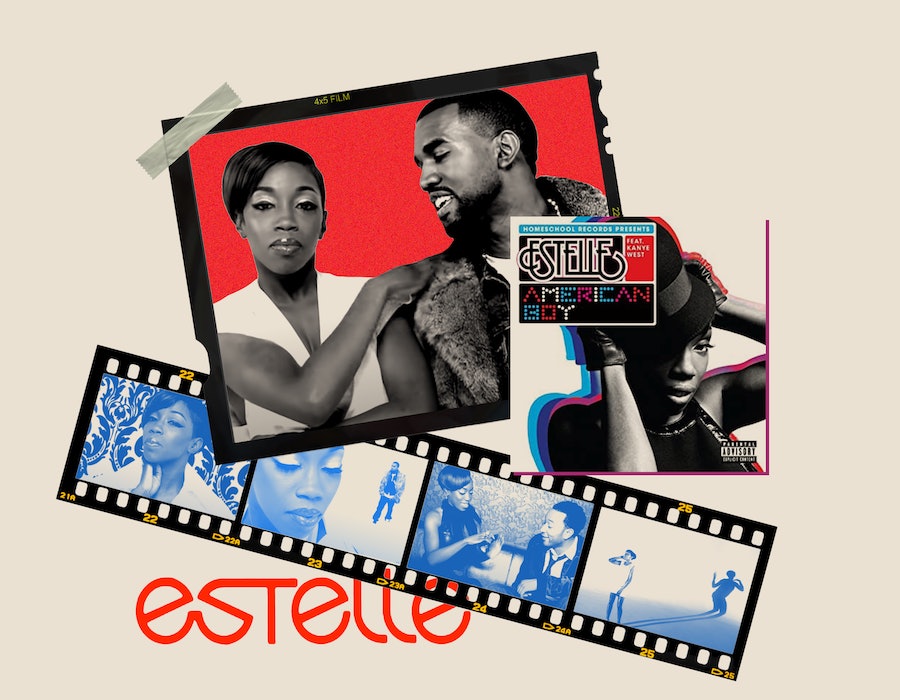 In the year 2008, chants of “yes we can” could be heard echoing across the United States as the nation geared up to elect its first Black President. The election cycle sparked a far-reaching sense of optimism among many, despite the looming cloud of a worsening economic crash.

For some, the soundtrack to this monumental year was “American Boy”.

The duet, performed by West London singer-songwriter Estelle and rap superstar Kanye West, dropped in March 2008 as the second cut from Estelle’s sophomore album, Shine. With a thumping beat and verses packed full of U.S. to UK cultural references, the song depicts a romance between a British native and her flashy American admirer. It arrived in a music landscape dominated by Timbaland features, Lady Gaga’s electro-pop debut, and during the advent of the industry’s digital takeover. Music sales on iTunes had risen 27% in the U.S. compared to the year before.

It wasn’t long before “American Boy” had achieved international success, reaching the top spot on the Official UK Singles Chart and the top 10 of the Billboard Hot 100 in the United States. Just a year later, in 2009, the track had become the 25th best-selling downloaded song of all time in the UK, the Telegraph reported.

There was a slight bump in the road, however, when “American Boy” was temporarily removed from iTunes by Warner Records. Per NME, the decision was made to encourage the purchase of physical copies. Following a dramatic fall in sales and chart position, it was later reversed.

Today, the legacy of “American Boy” can be felt way beyond its late 2000s peak. The song has enjoyed pop culture resurgences via James Corden and Sheridan Smith’s Gavin & Stacey rendition, and multiple viral TikTok trends, including a Fornite parody that is fast approaching 25 million Youtube views at the time of writing.

To discover more about the curation of “American Boy”, I spoke to Estelle — who recently became host to Apple Music Hits’ The Estelle Show — who shares how the track came to life in the studio, what it was like work with Kanye West, and much more.

On The Birth Of “American Boy”

“American Boy” came to be when I was in Miami. I was out there recording with my team at the time. One day I went to the beach with my homegirl, and I was admiring all these Cuban men because I’d never seen anything like it. They were all just so beautiful to me [Laughs]. So I was having a whole time with those guys, just talking and flirting, I didn't care because I going back to New York.

So, the next day I’m in the studio and John [Legend] asks me, “What have you been doing? What have you been writing about?” So I told him, “Looking at all these cute American boys.” Then he looked at me and said, “Well, let's write about that then.” We literally started writing the song right at that moment, and I was discussing what I liked and what I didn’t like about American guys.

“I don't like the way that you guys wear jeans,” I told John at one point. Because, in the mid-2000s, fashion in London was skinny jeans before skinny jeans were a thing, right? That’s how we later came up with “don't like his baggy jeans.” During an early studio session with myself, John Legend and will.i.am, we played the beat. As soon as I heard it I said, “That’s the one, that sounds like home, that sounds like London.” Will wasn’t sure at first, he told me, “I don’t like it for you,” and I thought he was outside of his mind. But, eventually, we agreed to just go ahead with writing and recording it.

John began writing and he put down the melody for the hook. He understood that I’m hugely influenced by jazz music, so early on he realised I was just going to flow on the song like it was a jazz record. I also view writing as filling in the lines of a colouring book. I do that with lyrics, so we started the song with “hi, nice to meet you”, and then figured out how to fill the gaps. That’s how we got to “hey, sisters, it’s really nice to meet you” — and then moved on to create the full story of the track.

Later on, we landed on the lyric “I just met this five foot seven guy” because it rhymed with the melody, and everyone in the room was like, “You do realise that John’s five foot seven, right?” [Laughs]. At one point we also struggled to finish off the “don't like his baggy jeans” lyric. We were brainstorming, and a friend who was in the studio suggested “but I'ma like what's underneath it”. It was cheeky, so I said let’s go with it. We had to give him 1%.

Later on, we landed on the lyric “I just met this five foot seven guy” because it rhymed with the melody, and everyone in the room was like, “You do realise that John’s five foot seven, right?”

Then we took all the sessions over to Circle House Studios in Miami, and I ended up recording the vocals myself. I knew my vocals had to sound light and the happiest they could ever be, so I started channelling Peggy from Hi-de-Hi! because she used to sound so ditzy and just ridiculously happy all the time. Which was great because at the time I was also genuinely happy. I was in Miami living my entire dream, and I believe that energy travels through music.

On Working With Kanye

We ran through all the different MCs and rappers when thinking about a potential feature on the song — it just always kept coming back to Kanye. People were telling me, “He’s gonna flow on this. He’s gonna say something wild.”

I first met him in 2003, and already knew him, so it wasn't weird. Eventually, he agreed in principle to get on the record, but it took a full year before he actually did it. When he arrived to start recording, he had just got back from London, which was perfect timing. He had all the lingo down. Although, he did ask me what people were drinking in London. I told him, “Not Grey Goose, everyone drinks Ribena.” I think he may have thought it was some special drink [Laughs].

In the studio, [Kanye] just came in and free-styled. He did it line for line, and bar for bar.

In the studio, he just came in and free-styled. He did it line for line, and bar for bar. Then we edited what we needed to edit, and kept the original vocal. He didn’t take too long. But at the end of the session, I was so happy. We were all so excited because the song sounded so good. Later that same day we all went to a club, I was in the middle of the dance-floor because they were not giving me VIP that night. But, of course, Kanye was in the VIP section. It was hilarious. I had just been in the studio with him like an hour before. It was wild.

On The Music Video

With “American Boy,” I didn’t really have an idea for the video at first, I just knew I wanted it to be fun, and represent what we did dance-wise in the UK. The director wanted a lot of lights and a disco theme, and I was like, “No, none of that. This is gonna be clean. You're gonna see all the fashion, you’re gonna see all the boys.”

I wanted the video to be sexy and feel like I was posing on the pages of a magazine. I also wanted it to look like abstract art, and be black and white with shadows. I wanted it to feel expressive, you know?

The video was shocking for its time. I was this Black girl in fashion dressed to the nines and being free. I didn’t fit the stereotype of what I should have looked like, and who I should have been. I wasn’t hiding in anybody's shadows, my face was clear as day for everyone to see, and my skin tone was there. There was no hiding.

On The Legacy Of “American Boy”

I thought the song was going to be successful, but I didn't know I was going to do all this. I just recently put together a full awards cabinet from that period, and I was like, holy crap. There are young kids telling me that they love “American Boy”, and I’m thinking, “This is nuts, you’re like seven. How do you know this record?” It turns out their mum used to play it in the car, or they heard it on TikTok. People are not forgetting the record, and I love it. It's a forever record, and I'm grateful to have at least one.

I remember the song being on Gavin & Stacey and it was wild. I actually met James Corden years later when I went on his show. He was so excited, and it was lovely to meet him because I remember the Gavin & Stacey version. People still reference that moment, but also reference the song in many different ways. There’s a resurgence every year – a couple of years back the kids on TikTok were doing a slowed-down version of the song. Then a remixed version got really big, and so did the Fortnite version.

It's beautiful to see. I will never complain. I love that everybody across the board, from your auntie to your mum, and even your smallest cousin is going to bop to my music. I’m with it, it’s good.

The Estelle Show airs Monday to Friday from 12 p.m. BST on Apple Music Hits. You can find out more about how to listen here.

More like this
Mariah Carey Is Releasing Her “Lost” '90s Grunge Album
By El Hunt
'The Lord of the Rings: The Rings of Power' Revisits Iconic Spots From 'The Hobbit'
By Darshita Goyal
Jinkx Monsoon Is About To Get Real Sketchy
By Sam Ramsden
Self Esteem's “F*cking Wizardry” Is An Anthem About Knowing Your Worth
By El Hunt
Get The Very Best Of Bustle/UK