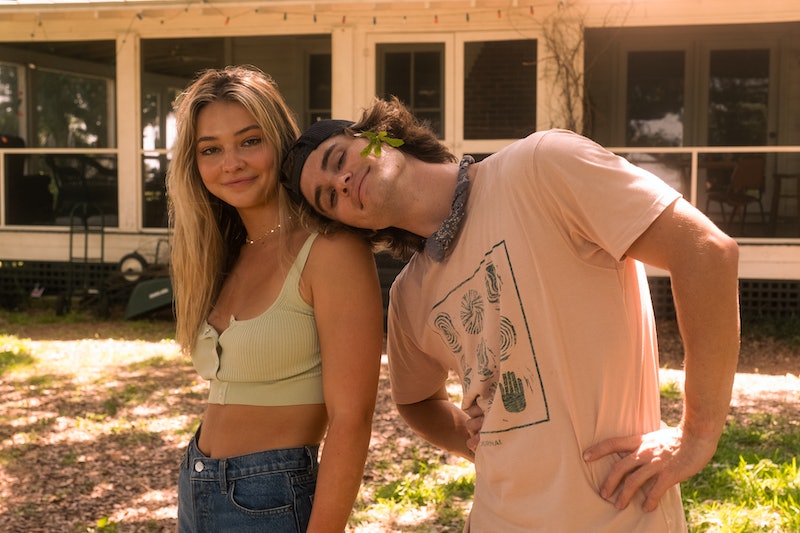 Pogues rejoice! On June 14, 2020, Outer Banks stars Chase Stokes and Madelyn Cline confirmed their relationship, sharing photos from a beach date on Instagram. Outer Banks, which premiered on Netflix in April 2020, focuses on two groups of teenagers living in the outer banks of North Carolina. Cline and Stokes' characters, John B and Sarah Cameron, date on the show, and given their onscreen chemistry, it didn’t surprise fans to learn the two are a real-life couple. Over a year later, as Outer Banks Season 2 gears up to hit Netflix on July 30, the couple are still going strong off-screen. (Hopefully John and Sarah will make it onscreen as well.)

Stokes and Cline celebrated their one-year anniversary on April 4, 2021, slyly confirming that they first started dating right when the first season of Outer Banks started streaming. “365 w/ u,” Stokes wrote on Instagram for his anniversary post, sharing a sweet photo of Cline walking on the street. She commented on the post saying, “And I’d do it again,” and shared her own Instagram slideshow of memories with Stokes, including him cuddling with a dog. “Thanks for helping me keep track of my belongings for a whole year,” she wrote. “adore u.”

The couple upped the ante when they won Best Kiss at the MTV Movie & TV Awards in May. Stokes and Cline accepted the award in-person, giving the audience PDA that would even make their Outer Banks characters jealous. Stokes pretended to freak out because he forget the names of people he wanted to thank, but Cline simply told him to “shut up” and planted a huge kiss on him, receiving huge cheers from the (socially distanced) audience.

Back in June 2020, Stokes confirmed their romance by posting the beachside photo with Cline on Instagram, documenting the romantic picnic date and his costar watching a sunset. He wrote, “cats outta the bag” with a heart emoji. Cline commented on the photo, writing, “Topper punching the air rn” and “I’ve fallen and I cant get up.” Several of the couple's Outer Banks costars also commented on the post, with Jonathan Daviss chiming in, “Well it’s about time,” and Drew Starkey joking, “Adopt me plz.” Fans were equally excited by the dating news, with one user commenting on the post, “this is everything.” Another viewer wrote, “Shipping it since day 1,” and one super fan added, “AWWWW yup the best couple.”

Rumors that Cline and Stokes were dating began in April 2020, when the latter revealed that the two were quarantined with costars Drew Starkey and Rudy Pankow, as per People. It isn't the first time members of the cast have lived together, as Stokes and Pankow were also roommates during filming for the show, but fans were convinced there was something more going on.

More like this
'The Queen’s Gambit' Season 2 Tweet Wasn’t From Anya Taylor-Joy
By Mary Kate McGrath, Jack Irvin and Grace Wehniainen
Ashton Kutcher Wants Danny Masterson “To Be Found Innocent” In Rape Retrial
By Jake Viswanath
Here’s Everything Coming To & Leaving Netflix In February
By Jake Viswanath
At 28, Debra Jo Rupp Was Living A Much Different '70s Show
By Grace Wehniainen
Get Even More From Bustle — Sign Up For The Newsletter
From hair trends to relationship advice, our daily newsletter has everything you need to sound like a person who’s on TikTok, even if you aren’t.