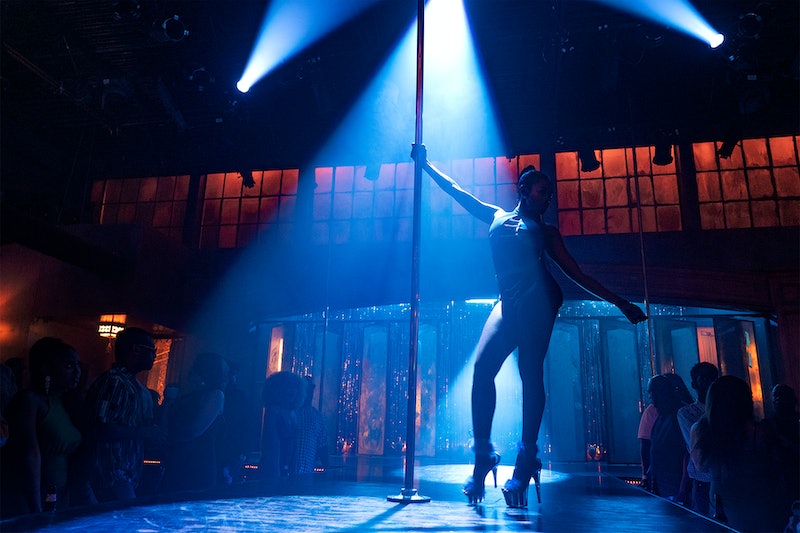 Starz's newest drama P-Valley is filled with feats of creativity, from the acrobatic strength of pole dancers to the business schemes employed to keep the strip club The Pynk afloat. Yet another one of those feats is the show's music, as the P-Valley soundtrack goes deep on the Southern hip-hop that's essential to The Pynk's clientele.

The series, which is set in Mississippi's "Dirty Delta" in a fictional town called Chucalissa, has a noir flavor that creator Katori Hall calls "Delta Noir," because it "takes traditional noir and does a lil' twerk on it," she told Metro Philly. The Memphis, Tennessee, native grew up close to the Mississippi state line, and the show is inspired by her experiences. "I wanted to show folks the South that I know and love — in all its darkness and its light." So it's only natural that there are plenty of Memphis artists on the P-Valley soundtrack.

It's a credit to music supervisors Stephanie Diaz-Matos and Sarah Bromberg (who works at Insecure creator Issa Rae's RAEDIO) that the songs work so well in the series. Many of the artists featured are from the Deep South, helping create that signature "Delta Noir" atmosphere that Hall describes.

In addition to songs from Southern artists like Duke Deuce, Robnhood Tra, and the late Koopsta Knicca, the soundtrack features an original song from Memphis native Jucee Froot ("Down in the Valley"), in addition to two songs performed by P-Valley castmembers ("Ten Percent" by Harriett D. Foy and "Sit On My Lap" by J. Alphonse Nicholson, respectively).

Here is all of the music featured in P-Valley so far, with more assuredly to come.

More like this
Linda Ronstadt’s “Long Long Time” Plays A Pivotal Role In The Last Of Us
By Brad Witter
Taylor Swift Visited The 'Glee' Set For This Bizarre Season 5 Episode
By Grace Wehniainen
Hilary Duff's Husband Matthew Koma Has Her Name Tattooed On His Butt
By Jake Viswanath and Stephanie Downs
Ed Sheeran Pays Tribute To "Brother" Jamal Edwards With SBTV F64 Song
By Sam Ramsden
Get Even More From Bustle — Sign Up For The Newsletter
From hair trends to relationship advice, our daily newsletter has everything you need to sound like a person who’s on TikTok, even if you aren’t.