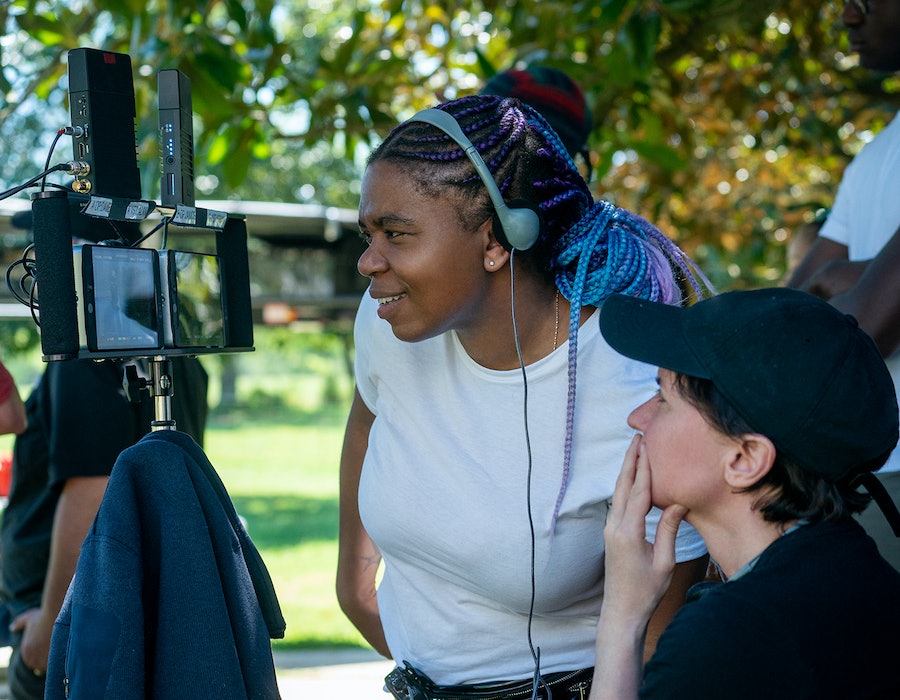 It’s chaos backstage at The Pynk. Women slip on bedazzled thongs, lace up Pleaser heels and guzzle liquor. A baby gets breast-fed. There is cash everywhere.

The Pynk is a strip club situated deep in the Mississippi Delta. The women that dance there are the beating heart of P-Valley, which premieres on Starz July 12. The show is rooted firmly in the female gaze, a perspective that comes across in every shot and nuanced character arc. It's an in-depth look at more than just stripping in the South — the show candidly confronts Black female sexuality, trauma, gendered violence and working-class life told through the eyes of the women experiencing it.

“A lot of people see these women as objects,” says creator, writer and showrunner Katori Hall. “I wanted to humanize them and show what these women and men have experienced in their lives as queer folk, as black folk, as poor folk.”

P-Valley doesn't shy away from the gritty realities of stripping. There are good nights and bad nights, like any job. The story opens on Autumn Night (Elarica Johnson), a mysterious newcomer who shows up to The Pynk looking for work. Fabulous non-binary club owner Uncle Clifford (Nicco Annan) gives her the job. What separates the dancers on P-Valley from the women of, say, the Bada Bing! strip club in The Sopranos, is that Hall's characters are dynamic and engrossing all on their own, rather than used as living breathing set pieces. Keyshawn (Shannon Thornton) is navigating motherhood in a toxic relationship, while Mercedes (Brandee Evans) is ready to leave dancing to pursue her own ambitions after years of saving up. All of them have dreams and flaws and insecurities, but at no point are they pigeonholed into stereotypes.

"I am well aware just from my own lived experience how people project fantasy on the Black female body."

“I am well aware just from my own lived experience how people project fantasy on the Black female body,” Hall says. As an award-winning playwright, the bulk of her work has focused specifically on the Black experience. “Even though I know this ugly inheritance first hand, I have to acknowledge the business of desire exists. I wanted to tell the truth: that this is a place of exploitation that lives in the intersection of race, class and gender, and women use this space to liberate themselves.”

Hall approached the project thoughtfully from the beginning, fully immersing herself in research for six years before she put pen to paper for Pussy Valley, the 2015 play that the Starz show was adapted from. To create the realism of The Pynk, she interviewed over 40 dancers and reflected on her own experience growing up in the South and going to strip clubs — she recalls celebrating bachelorette parties, birthdays, and even baby showers at them. “You’d run into friends and you’d run into family,” Hall laughs.

In the South, going to a strip club is a theatrical experience. For years, Hall was transfixed by the fearlessness of the dancers she watched defy gravity and contort their bodies on stage like Cirque Du Soleil performers. P-Valley was her way of figuring out who those people are after they step off the stage. In the show, there are a multitude of reasons why these women are working at The Pynk. Some are trying to save money for their futures, others have children to feed and some are trying to get out of abusive relationships. “There are women who are working in corporate America for the exact same reasons,” Hall notes. Sex work, P-Valley observes, is a job, not a lifestyle.

And the people who do it are humans, not bodies on stage in someone else's story. "This has been an opportunity to humanize people who have been dehumanized and misinterpreted for so long," Hall says. "We are living at this precipice and we are walking through the streets saying black lives matter. I’m adding to that call: black stories matter."

More like this
'Happy Valley' Recreated This Moment From S1 In Its Penultimate Episode
By Sophie McEvoy
Con O'Neill Was Connected With Sarah Lancashire Long Before 'Happy Valley'
By El Hunt
9 Time Catherine Cawood Was An Absolute Badass In Happy Valley
By Sophie McEvoy
This Dark 'Happy Valley' Theory Is Staring You Right In The Face
By Sophie McEvoy
Get Even More From Bustle — Sign Up For The Newsletter
From hair trends to relationship advice, our daily newsletter has everything you need to sound like a person who’s on TikTok, even if you aren’t.