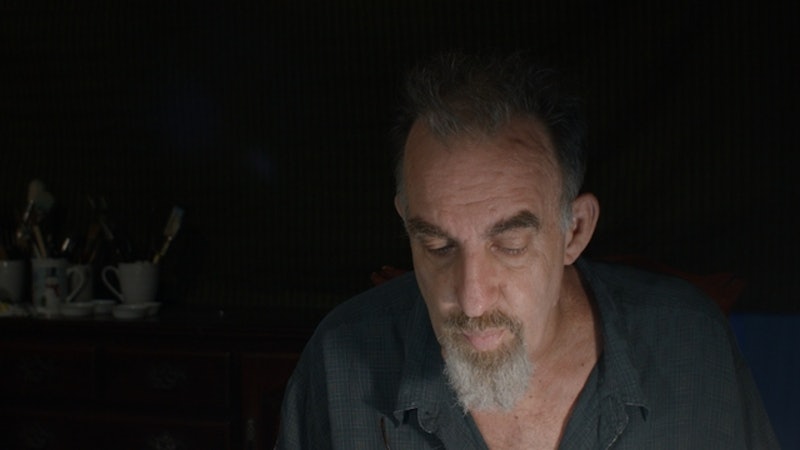 "Bob Ross was wrong. Everybody can't paint, it's not true," artist, musician, and actor John Lurie says in the trailer for his new HBO series Painting with John. The aloof 68-year-old filmed the six-episode project with a friend at his remote home on a Caribbean island, per the New York Times, and it's no conventional painting lesson. Instead, it's bits and pieces of Lurie's daily life — which yes, is mostly painting — sprinkled with thoughts that just so happen to double as deep creative advice. But Lurie doesn't see it that way. In fact, he admits in the trailer: "I was hoping that his show would be educational, but I really don't know what the f*ck I'm doing."

According to an interview with Rolling Stone, Lurie moved to his tropical paradise from New York after he contracted Lyme Disease 20 years ago. The relocation also marked his professional retirement from music (he led and played saxophone in the Lounge Lizards) and acting (his notable credits include Stranger Than Paradise, Down By Law, and The Last Temptation of Christ). Now, painting is his lifeline.

"I'm so lucky to have it," he told The Times. "For me, I have to work. It’s a lot like meditation, but I’m also just compelled to do it. When I don’t, I don’t feel good." Although his paintings have been shipped off to galleries and he has a permanent collection at the Museum of Modern Art, that curation doesn't motivate him. “I’m making them for me,” he said. “I’d be doing this even if they all just ended up under my couch at the end of the year.”

As an artist, Lurie recommends that if you feel creatively stuck, "just put the paint on the paper and see what you have,” he says on the show. “It’s really worth it. It’s better than watching TV.”

Clearly, Lurie has an unconventional approach to creativity and to life. And yes, it's one that's very different from that of America's beloved TV painter Bob Ross. But rest assured, although Lurie likes to rag on him, he no harbors no ill will against the cheery artist. "I appreciate Bob Ross. What he did was important," he told Rolling Stone. "But I just knew I wanted to say [in the show] that none of the trees in my painting are happy; they’re all miserable."