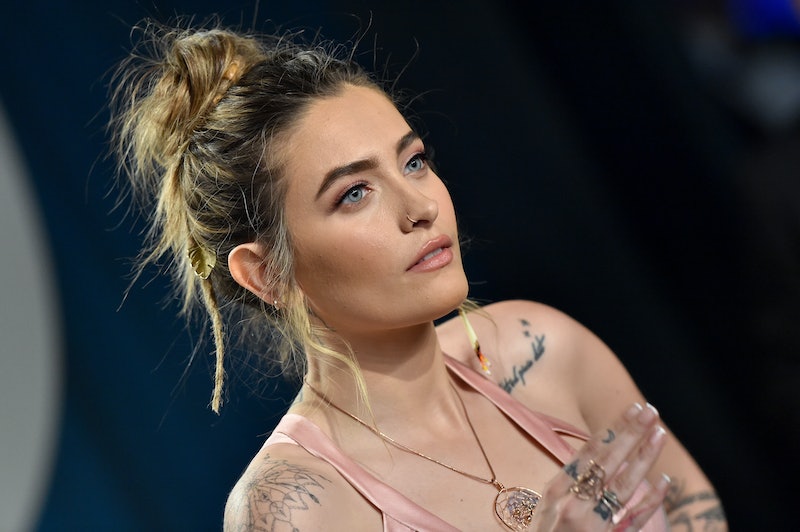 Michael Jackson's children have gone through the ringer publicly, but they've dealt with even more life obstacles in private, and one of them is finally opening up about them. Paris Jackson spoke about her experiences with self-harm in a candid new interview, revealing that her depression got so bad that she attempted death by suicide multiple times.

On the July 7 episode of her Facebook Watch series Unfiltered: Paris Jackson & Gabriel Glenn, Jackson said that she first stared self-harming herself after the death of her famous father, explaining that she moved in with her grandmother Katherine Jackson, where there was no rules about health and what she could eat. "I gained a lot of weight and food became an addiction," she said. "And then a cousin called me fat and I was like, 'OK, I can't do that anymore.' And that's how I fell into self-harm."

Jackson revealed that she would intentionally "cut and burn" herself, but never thought she would die from her dangerous habits. "I was always the one that was in control of the razor," she explained. "I knew how deep I was going." She went on to explain that it became like an addiction, and a coping mechanism for her emotional pain. "Part of it was the dopamine release, and dopamine is called dope for a reason," she said. "It feels good. Things like food and sex and drugs and music and working out. There's a lot of things that cause a dopamine release and self-harm is one of them. Part of it was that and then it was also a distraction from emotional pain and transferring to physical pain and the need for control."

Eventually, she reached a point where she attempted death by suicide "many times," which led her to attend a boarding school in Utah in a forced attempt to get help. "I couldn't take it anymore," she said. "I didn't have a choice, I was underage. CPS said that they would take me if I wasn't sent there." Jackson said she doesn't regret the experience, although it wasn't entirely beneficial either. "I learned a lot about myself," she said. "The problems that I went there with got fixed, but I left with way more than I came in with."

The actor and model has been very open about her experiences with depression and anxiety as a teenager. "I was actually crazy," she told Rolling Stone in 2017. "I was going through a lot of, like, teen angst. And I was also dealing with my depression and my anxiety without any help.” Back in June 2013, a then 13-year-old Jackson was hospitalized after a reported suicide attempt, but since then, as she said in her new series, she's learned to take care of her mental health.

Now, aside from her career, she's focused on accepting herself, even as she's struggled to do so. "I want to influence self-acceptance and courage and being comfortable in your own skin," she said in conclusion. "I'm trying to just be content. Baby steps. Self-love s**t is hard."