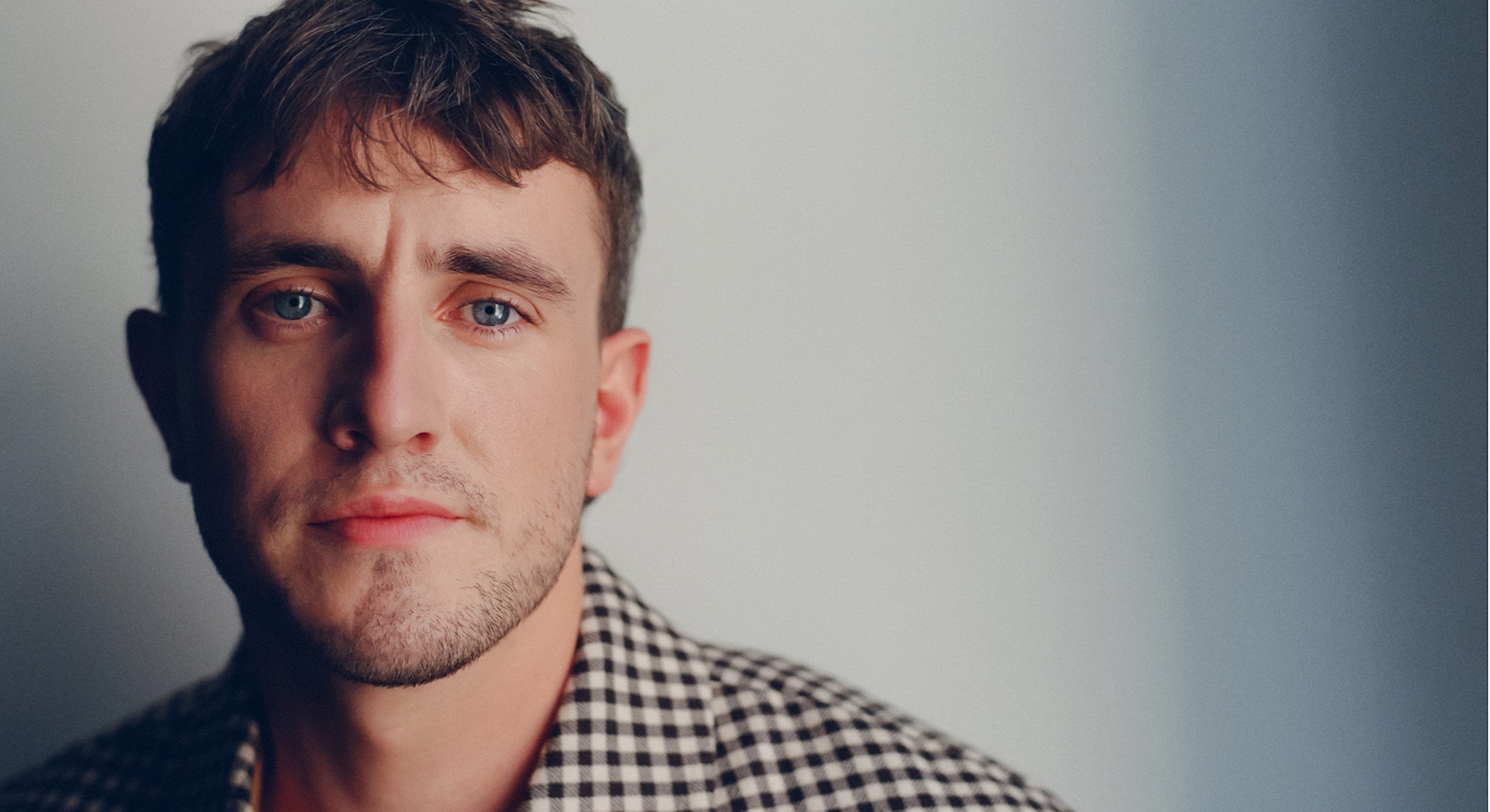 Drinking a spicy margarita at a downtown Manhattan hotel, Paul Mescal is worried that he’s coming off as “wanky.” It begins when the Irish actor talks about his experiences of dissociation while filming. “I mean that in a non-wanky actor way,” he says, meaning not in the pretentious, masturbatory manner of actors who talk about their technique. Wankiness comes up again when, after a not-so-welcome attempt at inquiring about his romantic life, I back off by asking about his taste in music. He name-checks Majical Cloudz and Stephen Sondheim. “I like musicals. If something is good to me, it’s the most played.” Same goes for film. “I love blockbusters, if they’re entertaining,” he says, before admitting, “I love all of the wanky European cinema if it’s good, or the A24 slate.”

It’s difficult to extract much more personal information over an hour with the preternaturally polite, good-natured 26-year-old. Mescal was a Dublin theater actor when 2020’s Normal People made him the number one crush of pent-up pandemic Twitter, and he seems unsure about how much of himself to offer up for public consumption as he promotes his new film, God’s Creatures. “I feel more secure in my own relationship to my new version of my new life,” he says, compared to his first publicity blitz, which happened mostly over Zoom. Twisting a cloth napkin around his Cartier love ring and matching gold pinky ring, he adds, “I’m keen to protect whatever it is that allows me to play those kinds of roles.”

By “those kinds of roles,” he means reticent men whose aura of mystery might be harder to sell if the actor were more familiar. Consider Normal People’s quietly intellectual jock, Connell: Would his inability to express his feelings outside of the bedroom have been quite so captivating if we believed Mescal was a film snob? In God’s Creatures, out Sept. 30 from A24, audiences will see Mescal play another emotionally tortured young Irishman, albeit a more sinister one. He stars as Brian, who, after having a sexual assault charge brought against him, manipulates his mother into providing him with an alibi. Three weeks after that, Mescal’s second A24 project, Aftersun, will be released, in which he plays a troubled young father, as seen through the eyes of his daughter, who’s still trying to figure him out 20 years later.

Mescal’s interest in repressed men comes partially from personal experience. “I’m lucky to not be from my parents’ generation,” he says. “I went to drama school and talked about my feelings for three years, and I went to therapy. But I’m also born of something which is not that.” He is drawn to characters whose actions can’t be easily explained by an earlier scene of trauma, and he liked that God’s Creatures didn’t spoon-feed audiences a tidy backstory of abuse to suggest why Brian becomes a predator. “I think there’s a large portion of movies these days where it’s about the end product of acting,” he says. “The artist doesn’t have to do any work. It’s just like, wow, look at this impressive collection of scenes that are performed pretty competently and really well.” He prefers actors who force you to pay attention to them with sheer presence: “What is it about a performance that is confident enough to not have to explain to an audience in the first 30 minutes why a character is motivated?”

With back-to-back starring roles under the banner of A24 — the film production and distribution company responsible for zillennial touchstones Euphoria, Zola, and Bodies Bodies Bodies — it’s tempting to think that Mescal is shoring up indie cool kid cred. But Aftersun producer Barry Jenkins says there’s no ironic distance or face glitter in Mescal’s work. “A24 is this ‘cool’ place [but] they’ve always bristled at that association and I think Paul does too,” says Jenkins, whose Oscar-winning Moonlight was also A24. “Coming off of Normal People, he could have gone and been the next young Hollywood male heartthrob. But he’s in Aftersun wearing ’80s dad jeans and cheesy T-shirts. I don’t think either of the films that Paul is in are like this ‘cool kid’ genre. They’re very earnest characters. All praise to him for going against the grain of what’s cool in neon lights.”

Mescal deactivated his public Instagram account in the spring of 2021, not long after he finished the marathon promotion for Normal People. “It’s a specific 21st-century skill that I don’t think I have,” he says. But nothing fuels a crush like silence, and the lust for Mescal — his gold chain! his short shorts! — only grew after he went dark. And while being the subject of all that projection has its own challenges, he thinks the demands of social media outweigh the benefits of self-promotion. “The payoff isn’t very good. There is access to you 24/7, all the time,” he says of social media. “I have social media in a smaller way now, just like, posting photographs of my friends, which will never be work related. I will never be in the photos.”

Fans now get most of their information from Mescal’s partner, musician Phoebe Bridgers, whom he first met on Twitter. She soft-launched their relationship in a tweet (“Paul thinks thousand island is called hundred years sauce”) and hard-launched it in a grid post of him kissing her on the cheek while wearing a Prada parka. With their relationship Instagram official, Mescal started popping up at various stops on Bridgers’ world tour throughout the past year. Fans, to whom the couple is “mom and dad,” post videos of him watching the show while cradling Maxine, Bridgers’ black pug; in one, the musician sneaks away during an interlude of “Scott Street” to quickly kiss them both. He appears in Bridgers’ music videos and joined her on the Coachella stage to scream-sing “I Know the End.”

“There’s a large portion of movies these days where it’s about the end product of acting. The artist doesn’t have to do any work.”

This is all material for a new internet fantasy starring Mescal: the first boyfriend of indie rock. The kind of modern feminist man who isn’t threatened by being on the sidelines, supporting his girlfriend. But talking to Mescal about his relationship, he does not make it sound grand or symbolic or subversive. “I really, really enjoy being around her and her band and her friends. It’s also great to get to see a country that I’m not familiar with,” he says. “I really like the Pacific Northwest. Love that neck of the woods, like Portland. New York. I feel like I’m a pretty relatively enthusiastic person, so it’s all been really happy.” Maxine, he adds, is well suited to tour life as well. “She’s excellent on flights. Excellent with noise. People love her. She’s like a great extension of us, in representing well in every social interaction.” Not long afterward, Mescal’s publicist gently ends our conversation, and the actor puts on his Wayfarers to be shuttled to his next obligation.

Struggling to square the giddy groupie in Bridgers’ concert videos with the reserved actor I meet, I decide to ask Mescal’s Normal People co-star Daisy Edgar Jones to shed some light on what Mescal is like in private. “It’s hard to think of something the public might not expect to know about Paul,” she writes in an email, “because with him, what you see is what you get.” She explains that he is warm and generous and does not live up to the stereotype of the intense, tortured artist. “The thing that strikes me most about Paul is his ability to access this raw vulnerability, to bare all on screen and go to such dark and painful places in his work and yet still be an incredibly kind, funny, and wonderful person to be around.”

Although Mescal is unfailingly kind, baring all — baring anything — appears to be something he reserves solely for the screen. And perhaps for short bursts among his fans, as Jenkins observed while spending time with him at the Telluride Film Festival. “Telluride’s a very relaxed festival, so there’s nothing isolating you from the festival-goers. And there were young adults who really loved his portrayal in Normal People and were kind of obsessed,” Jenkins recalls. “He was there with his partner, and he was just so sweet about it. You could tell he saw himself in those people, and he understood what his interactions with them could mean.” In real life, in other words, Mescal is as available as he hated feeling on social media. Not at all wanky.