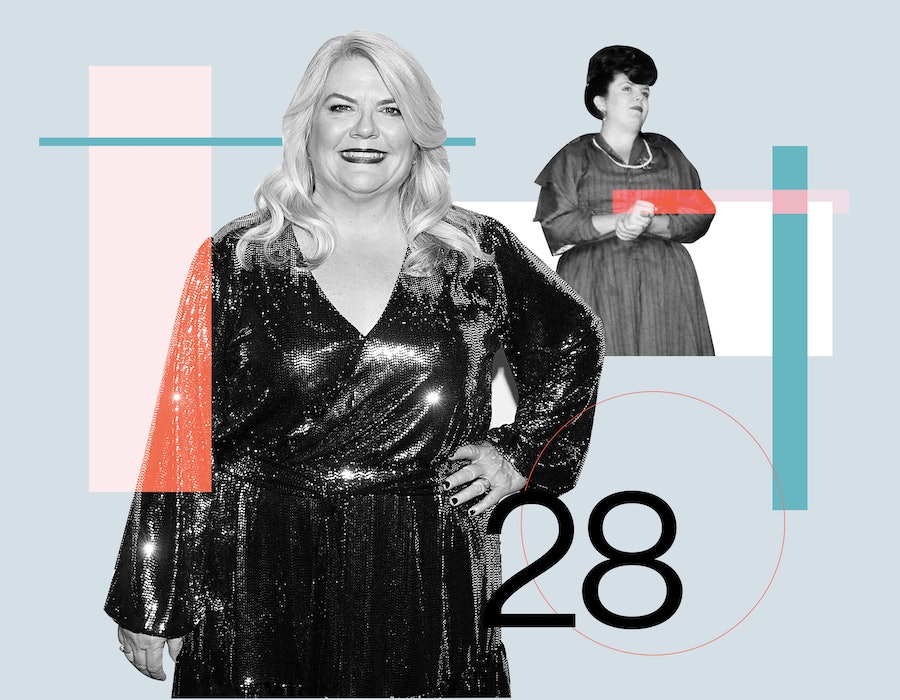 In Bustle’s Q&A series 28, successful women describe exactly what their lives looked like when they were 28 — what they wore, where they worked, what stressed them out most, and what, if anything, they would do differently. This time, Mapleworth Murders star Paula Pell reflects on her struggles with body image and breaking into comedy.

Just like her Jessica Fletcher-esque protagonist Abigail in Quibi's Mapleworth Murders, Paula Pell has several cats and dogs — seven, to be exact. "They're all very, very old, they have medical problems," Pell tells Bustle. "Every day is doing some kind syringe, or you know, cleaning out their eyes." Her character Abigail tends to her pets with similar care and dedication, allotting three guest rooms for her furry friends — one for cats, one for dogs, and one for them to play together. That her character is also an extreme animal lover is just one of several specific personal touches Pell added into the show.

"We really turned Abigail on her head in terms of those kinds of spinster ladies," Pell says. "She's gay, and she's got a house full of animals, and she's got kind of a foul mouth." Pell's fiancée, the comedian Janine Brito, even cameos as a handywoman with whom Abigail is smitten, and audiences will recognize plenty of Saturday Night Live and 30 Rock alums among the cast.

In many ways, Mapleworth Murders represents the kind of project Pell always longed to do, but could never fully realize until now. Though Pell's biggest claim to fame is her 18-year tenure as a writer on Saturday Night Live, her initial goal was to be an actor. And while she's returned to acting in recent years with on-camera roles like the 2019 ensemble comedy Wine Country and NBC's A.P. Bio, Pell's early acting career was discouraging. In her late 20s, she acted in commercials, did a re-enactment on America's Most Wanted, and occasionally showed up as a stern adult on All That (where she met "a little peanut" named Kenan Thompson). But while Pell was slowly building her acting reel, she noticed plus-size women were only typecast as the punchline, so her roles were few and far between.

After repeatedly losing large amounts of weight, Pell felt directionless. "I was trying to do the 'Before' and 'After,'" she recalls. "I wanted to be an 'After' so bad, and then once I was, I quickly returned [to the 'Before']. It was almost like a game show of, 'How much can you gain back, how fast?' But it just didn't feel safe. It didn't feel good. It didn't feel comfortable."

When SNL finally came knocking in 1995, Pell landed a writing job, which drastically changed her career path. Now, Pell is finally able to write her own roles, making them as weird (and as gay) as she wants. Little did she know at 28 that at 57, she would star in her own TV show. Below, she looks back at acting, writing, and how far she's come to feel comfortable in her own body.

Take us back to when you were 28. How did you feel about your life and career?

1991 was when I was 28. It's four years before I came to New York to do SNL. I was performing at Walt Disney World's Adventurers Club, which is this nighttime entertainment complex. It was just a really fun, strange time. I got to perform every night, I was getting paid pretty good as a young actor, as most of my friends were starving in New York. I had a little car, and I had a little house I rented, and I felt like pretty accomplished that I could just make a living at performing every day, even though it was at the theme park.

It was a really fun artistic time for me, but it was very tumultuous in the fact that I just kept trying to finally, finally lose the weight, because that was always such a bane of my existence. And that year in particular, I think, is when I lost 100 pounds. I just completely transformed into this little, petite, skinny person. I didn't really know who the hell I was after that, and really kind of fell apart pretty badly from gaining [the weight] back. And yet, a lot of my accomplishments up until then were from me playing character roles and being in this body that was plus-size and utilizing it just as who I was. But I just kept wanting to shed it and be more in the sort of "normal range." And when I got very, very thin, I also didn't feel funny. Not to say that thin people can't be funny, but because I changed myself so drastically, I just had no sense of identity anymore.

"The shiny thing that you want is always going to bring you something that you didn't really want. That's profound! Stitch that on a f*cking pillow!"

Was the pressure to lose weight entwined with wanting to be in front of the camera?

When I think back on that time, there were so few — truly so few — younger, plus-size females on anything. And there's still not enough, by the way. It used to be a young, fat girl would only get a part on a sitcom [where] the premise is like, "Oh, hey, my cousin's in town, Tom! I want to fix you up. She's really great." "Oh yeah? She's cute?" "Yeah, yeah, no, she's cute!" And then she shows up, ding-dong. I'm the cousin, and she's fat. And that would be the whole premise of the funny thing. And it was very accepted that the funny thing is you got stuck with the fat girl, you know?

So I only got negative messages in terms of my viability. I knew once I was older that would probably be fine, because I could play the grandmas and the matronly. But as a younger actor, I didn't see that many options in my head. And you know what? When I look back on it, most of the parts that I got were those character roles, and it didn't matter that I was bigger. You started doing the parts of these little ingenues, and you're like, "Oh. As a comedy person, this isn't as fun at all." It doesn't necessarily mean the center roles couldn't be good or thinner people can't be hilariously funny, 'cause there's obviously clearly many people that are so funny, but for me, trying to fix myself did not work. And it wasn't even leading to the goals that I wanted. It's always a lie — the shiny thing that you want is always going to bring you something that you didn't really want. That's profound! Stitch that on a f*cking pillow!

Was there a moment in your career where you felt like you made it?

I got this Writer's Guild Award recently in New York, and it was sort of a retrospective of my career — the Herb Sargent Award — and all my beloved friends were there. My family was there. They showed a reel of all my work over the years, and it felt kind of Lifetime Achievement-y. But I do think that it all feels so surreal, that I still never have fully absorbed that I was part of SNL for that long, and that being something in my childhood I loved. I'd be there writing in an office, and it's like, "This is Gilda Radner's office."

You look at people that are crazy rich, and you're like, Do they ever really take it in? Like, can [they] really observe it? And I felt like, creatively, that's how I felt at SNL, where I couldn't really ever take it completely in, because it doesn't feel real!

What did your career goals look like at 28? Were you hoping to go into comedy?

One thing that I always dreamt of is to be on Broadway, kind of like [Murder, She Wrote star] Angela Lansbury was! She was in Sweeney Todd. She was Mrs. Lovett, which is my favorite. And my goal of any Broadway thing or revival would be to be Mrs. Lovett, because I love that part so much. It's so weird and dark and funny.

At that time, I was doing commercials. I dreamt of SNL or to be on a sitcom or to just be to be seen and laughed at and to do characters and to be funny. But I didn't, at the time, call myself in any way a writer. It's funny how creative types, we don't ever want to call ourselves what we actually do well. I feel like sometimes that's sadly more of a female thing that we're afraid to just take the seat, you know? It's like, "Yeah! You are a writer. Sit down and shut up and be one. And stop trying to qualify it and ask someone else to give you permission to be that." When you know you're good at something, and you do it well, and people love it — yeah, that's what you are, guess what!

I think realizing that whatever great stuff is going to come out of you as a writer or a performer is coming out of the most authentic part of you. And to stick with what really, really makes you laugh. Because the one thing that I have made the mistake of — and every single person I know has made the mistake of in their life — is sometimes when you're trying to be successful, you look at who's successful, and you try to emulate that. And the most glorious, freshest, funniest stuff comes from something original. I mean, that's how people have become stars at SNL!

More like this
At 28, Debra Jo Rupp Was Living A Much Different '70s Show
By Grace Wehniainen
At 28, Rosie Perez Risked Her Career To Stop Playing Stereotypes
By Gabrielle Bondi
Here’s What Happens To Bill & Frank In 'The Last Of Us' Video Game
By Brad Witter
'The Crown' Season 6 Has Suspended Filming "Out Of Respect" For The Queen's Death
By Bustle Staff
Get Even More From Bustle — Sign Up For The Newsletter
From hair trends to relationship advice, our daily newsletter has everything you need to sound like a person who’s on TikTok, even if you aren’t.