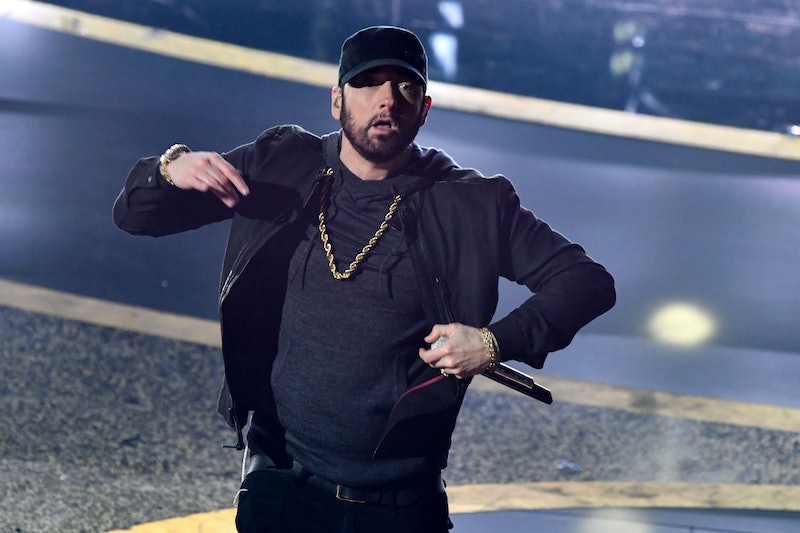 Saturday Night Live is known for getting famous people that stay pretty private to somehow appear (see: Adele's recent hosting gig), and the Dec. 7 episode was no exception. Eminem made a surprise appearance on SNL — right after Pete Davidson did a perfect impression of him. And Twitter can't get enough of just how spot-on the comedian was.

During the pre-recorded skit, Davidson appeared as the Oscar-winning rapper, white tank top and all, and transformed his hit "Stan" into the Christmas-themed parody "Stu." The new character writes a letter to Santa Claus, played by host Jason Bateman, asking for a PlayStation 5. Like many other people around the world, Stu has tried and failed to get the console from every store on Earth, leaving Santa as his last resort. He even gets a chest tattoo of Saint Nick to show his dedication, before things quickly go south between the two.

Luckily, Stu has back-up. Kate McKinnon played Dido for the song's chorus, cuddling the PS5 in bed, while Bowen Yang appeared as the one and only Elton John, who Eminem has had a unlikely friendship with since 2001. Elton also wants a PS5, who knew? Of course, no appearance was as golden as Slim Shady himself, who receives the gift from Santa that Stu was so desperate for. "I guess Shady must have been a good boy this year," he says. "Sorry Stu, you f*cked up."

Viewers couldn't get enough of Stu, with many fans immediately taking to Twitter to praise Davidson's impeccable Eminem parody. Some fans even went as far as to call it their "favorite SNL sketch ever." But this is actually not Davidson's first time impersonating the rapper. In 2017, he gave a very brief but still accurate impression of Eminem during a sketch in which celebrities auditioned for the live-action remake of The Lion King. Additionally, Eminem performed "Stan" when he last appeared on SNL as the musical guest, also in 2017. "Stu" has made the show come full circle.