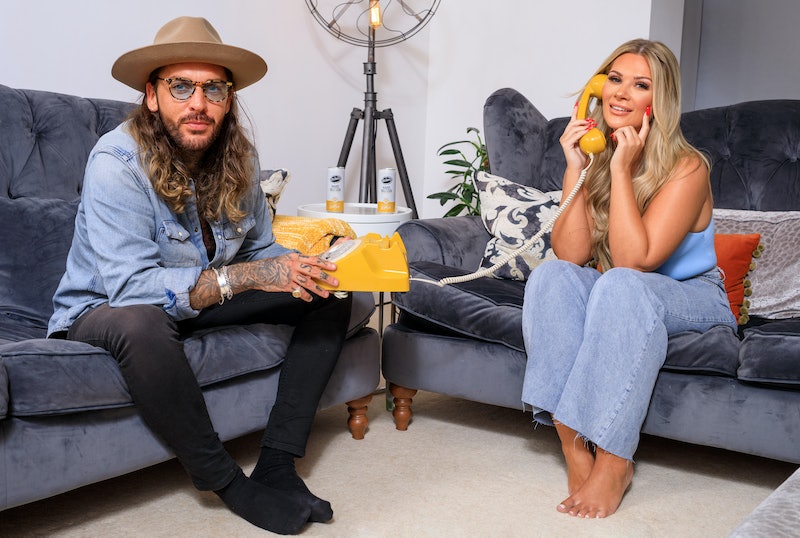 The first few weeks of dating someone can be bliss. It’s all trips to the pub, long (socially distanced) walks in the park, and working out whether you both went through the same emo phase in your teens. But, as we all know, dating also comes with its challenges. How keen is too keen? Why have they left me on read? What if they're a secret Coldplay fan? With all these questions and more, it's always nice to have someone on hand to chat though your dilemmas with. Well, how does two of them sound? Reality TV stars and seasoned Celebs Go Dating clients Pete Wicks and Shaughna Phillips are opening a dating hotline to tackle every one of your relationship questions, and the pair have promised no query is out of bounds.

Wicks and Phillips have teamed up with Mike’s Hard Seltzer to open a live hotline on WhatsApp on Sept. 25 from 3-6 p.m. where they'll be on hand to answer all your dating questions. A study by the drinks brand found that more than two thirds of Brits agree they are over-thinkers and over 50% say this applies to their love life. And that is something I can definitely relate to. So, I decided to put the self-appointed love doctors to the test and take my dating woes to Wicks and Phillips, asking their opinions on ghosting, lying, bad kissers, and more. The pair certainly proved that they're willing to be brutally honest and the results were pretty hilarious.

Alice Broster (AB): Breakups are hard but is ghosting ever acceptable?

Shaughna Phillips (SP): I know what the general consensus is and it’s not ideal but I’m a bit of a wuss. I know I'm letting someone down by ghosting them but it’s easier for me to do. Or I will send a message and then block them.

Pete Wicks (PW): Basically, Shaughna is the queen of ghosting. We call her Casper. I don’t like ghosting, I don’t think it’s nice. But I have done it before.

"Shaughna is the queen of ghosting. We call her Casper."

AB: Is honesty really always the best policy or are there certain secrets that should be kept hidden?

SP: Certain secrets are definitely fine. Sometimes you might tell someone part of the truth in order to protect them. Lie, lie, lie. I live by ignorance is bliss. We all grow and are different from yesterday.

PW: I couldn’t agree more. You can’t tell people everything about you. If I did that I’d never get a bird again. You’ve got to keep some things to yourself. There’s white lies and honestly is definitely the best policy in most situations. But a little white lie here and there can’t hurt.

On the big and important stuff, trust and honesty is so important but when it comes to your past sometimes people don’t need to know.

"A little white lie here and there can’t hurt."

AB: Do you think long distance relationships work and how can you keep them going?

With my first long distance relationship I was young and stupid. If it’s going to work it can work anywhere. I think the most important thing you can do is FaceTime.

PW: I totally agree. I think long distance relationships can work but it’s dependent on the two people involved. If you want it to work it will but if you don’t put the time and effort in it won’t.

I think that, as soon as people go away, [a lot of people] start to worry and overthink things. If you don’t have a basis of trust then it won’t work. And long distance relationships require a lot more effort. It’s a good test.

AB: Say you’ve been on a date and it’s gone really well but you get to the end of the night. What do you do if they’re a bad kisser?

SP: At our ripe old ages you’ve got to have kissed enough people to be alright at it. I don’t know the last time I had a bad kiss, I think I was a teenager. This is a good reason for ghosting here. Because you can’t tell people that they’re bad at kissing.

"At our ripe old ages you’ve got to have kissed enough people to be alright at it."

PW: I do agree but I have kissed some people who have used their tongue as a weapon. Sometimes it’s a bit too much, slow yourself down. For me, it depends how good the date was because kissing is a massive signifier for sexual chemistry. If it’s bad it’ll put a lot of doubt in your mind as to whether that person is right for you, physically.

A good kisser is so important. It’s not a deal breaker because you can teach people but it is important. I know it’d make me second guess someone and a date.

AB: What is the 'right' way to break up with someone?

PW: In this situation I think honesty is key. If you’re breaking up with someone it’s because it’s not working for whatever reason. I’m a firm believer in soul mates and if one person is not fully in a relationship then you have to say. Because the longer you leave it, the harder it’ll be for the other person to get over it. Just lay it down but you have to do it face-to-face. You have to give them that respect.

The way I see it is, are you bringing something to each other's lives? Are you benefiting each other? Are they making things better? If you could live without them then maybe it’s not working.

SP: I think this is a reason I stay in bad relationships. I find it so hard to break up with people. It definitely gets to a point where you have to have a sit down conversation with someone to explain why it’s not working.

I think people forget that for the majority of the time in a relationship you’re supposed to be happy. Everyone has rough patches but if you spend most of the time unhappy then it’s a waste of time.

I have a good test to establish whether you want to be with someone. When you start thinking about booking a holiday and you’re looking at next year, if your first thought is ‘I don’t know if we’ll still be together’ then it’s not good.

More like this
Joey Essex Is Rumoured To Be Dating A 'Love Island' Favourite
By Sam Ramsden
Gemma Atkinson & Gorka Márquez Are Strictly The Sweetest Couple
By El Hunt
Molly-Mae & Tommy Fury Revealed Their Baby Girl's "Really Unusual" Name
By Sophie McEvoy and Sam Ramsden
4 Surprising Celeb Throuples That Got The Internet Talking
By Sophie McEvoy
Get The Very Best Of Bustle/UK
Sign up for Bustle UK's twice-weekly newsletter, featuring the latest must-watch TV, moving personal stories, and expert advice on the hottest viral buys.