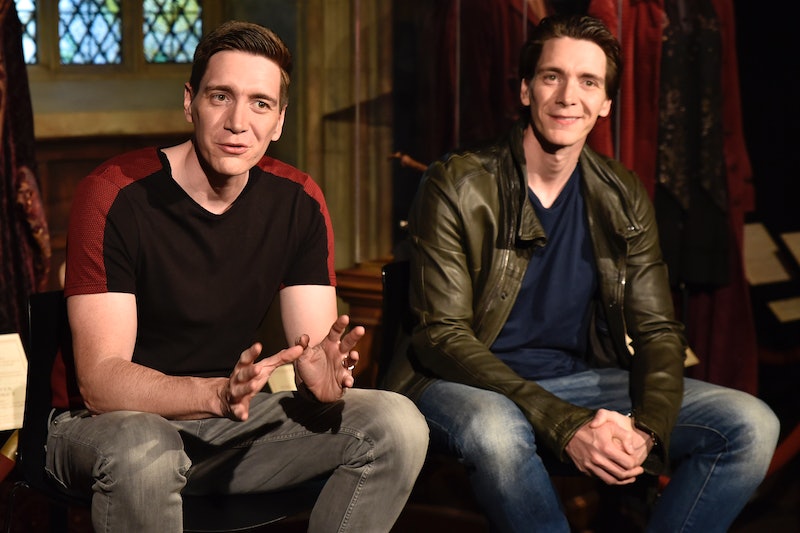 It’s been ten years since the release of the last Harry Potter film — the second installment of Harry Potter and the Deathly Hallows — and if like us, you’re missing the magic, a new Harry Potter exhibition is opening up at the London Film Museum in Covent Garden on July 12.

The Harry Potter Photographic Exhibition features reams of behind-the-scenes photographs and films, including some that have never been published before. For example, you’ll be able to find out how the crew filmed in Piccadilly Circus in Harry Potter and the Deathly Hallows — Part 1, or find out just how big Shell Cottage actually is.

Fans can also immerse themselves in the Harry Potter universe with the opportunity to get their own Ministry of Magic photo IDs or a photo of themselves on a Quidditch broomstick. And if you’ve ever hankered for a taste of the wizarding world’s favourite beverage, Butterbeer, you’re in luck. The exhibition is also home to a Butterbeer bar, modelled to mimic the pubs of Hogsmeade — where you can grab a bottle or two with friends, along with treats inspired by the films.

The exhibition also features sections on other Harry Potter spinoffs, such as the Fantastic Beasts franchise or Harry Potter and The Cursed Child.

Ahead of the exhibition, Bustle catches up with James and Oliver Phelps, who brought the charming and endlessly entertaining Fred and George Weasley to life.

What were your favourite memories from the set?

James: We have a lot as you can imagine. And looking at the photos now remind me of them because it’s like when you hear a song from 10 years ago, and you remember exactly the moment when you're listening to it for the first time. There's one in The Burrow, where the Weasleys live, and I remember exactly how all the Weasleys were just hanging out off-set as well, treating it like a proper living room. Little memories like that, which when looking back on them, you remember with great happiness.

Oliver: There’s a great photo of Diagon Alley which reminds me of when we were filming in there in the second movie, how immersive the set was. I remember just like going into the shops, being able to explore the set and everyone was fully dressed as well. It really takes me back to these those times.

What were the toughest scenes to film?

James: Wet Quidditch days, for sure. Those in the third movie sucked because it was set in a storm — you were on the broomstick and and right before they yell action, water was just thrown over you and you had wind machines blowing in your face. Yeah, that was an interesting day at the office.

Oliver: One which scarred me for life, I think, was the Halloween scene in the first movie. I've never seen white chocolate mice the same ever since. Because like complete novices, we just ate as much of the candy as we could do to begin with, and then they go, “Okay, let’s do it again.” And after about take 14...

Emotionally, were there difficult scenes to film?

Oliver: The main one was probably the one where Fred snuffed it.

James: That was easy for me, ha! But also, when we were filming our last scene. They’d already mainly wrapped up, and we were on the turret overlooking Hogwarts and it’s when Voldemort’s Army arrives or something. And I remember thinking at the time, “We’re definitely not going to be here tomorrow.” It wasn’t a sad feeling but it’s like when you finish a race and it couldn’t get better. And we knew they were gonna knock the set down because it was the last day and the bulldozer was literally on the other side of the room.

Do you still keep in touch with your Harry Potter cast mates?

James: Yeah, we do! We played golf with Tom Felton the other day, and we still keep in touch with many of the cast and crew.

Oliver: The best way to describe it is people you went to university, or you went to high school with. You may not have jobs in the same field after, you don't see each other every day again, but you still keep in contact. And when you do catch up again, you almost fall straight back into where you were.

Was there ever any fun sibling rivalry on set?

Oliver: Yes, but it was probably more a case of just making sure that we were the best that we could be. That’s always been a strong thing between us and it still goes on to this day, like today, James is wearing a blazer, but I’m just in a sweater.

James: Yeah. I try to be smart.

Oliver: On the set, for example, like in the Quidditch, it would be who could to get it done in the least amount of takes, because you had to be very precise. Or if we're in the Great Hall, it would be who could eat the most spoonfuls of water, silly little things like that. There's a lot of waiting around on a day when you're filming, so anything to make the time go a bit quicker.

Fred and George were known for pulling pranks. Did you guys ever do something similar?

James: Yes, and we could always get away with it because we could always just say we're method actors, and we did it to get into our characters. So we learnt that in the trailers, every TV was the same and that any remote control could operate any TV. We were filming in Virginia Water, which is near the studios, and I think we were in Rupert’s trailer. We made him believe that if he got closer to the TV, the volume would go up, or if you jump once, the channel would change. And basically just me with the remote control!

What Hogwarts house would you be in?

James: Hufflepuff — I’ve actually got a badger that lives under my shed.

What is your favourite part in the exhibition?

Oliver: I think if I had to pick one specific part, it's actually nothing to do with our characters, but the section on the Ministry of Magic, where they’ve recreated parts of it with the green tiles. It was one of the biggest sets I've ever seen in my life, and the recreation really gets the scale of it.

James: There's one photo in particular of Michael Gambon as Dumbledore in the Great Hall. And he's only in about 25% of the photograph, the rest of it is the crew watching him or doing for their job, you know the lighting guys making sure the lights are fine, script advisors checking lines, etc. I think that tells such a great story of how a film is made.

The Harry Potter Photographic Exhibition opens in Covent Garden on July 12. Tickets are available to book at HarryPotteronLocation.co.uk.