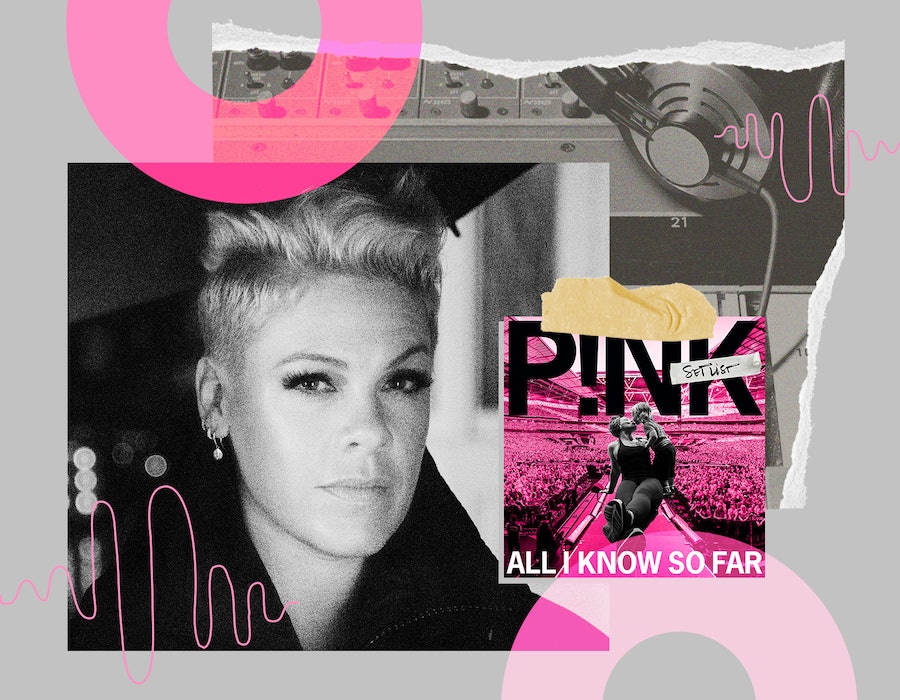 “I always wanted to be a social worker or a singer,” P!nk tells Bustle. We all know which path she picked. Songs like “Just Like a Pill,” “Stupid Girls,” and “Raise Your Glass” helped establish her as one of the world’s most successful musicians; between 2000 and 2017, the three-time Grammy winner amassed 21 Billboard Hot 100 top 20 hits — all but four of which she co-wrote.

But the musician born Alecia Moore doesn’t feel like she really chose at all. Music “saved” her, and she’s found that it can save others, too. One of her proudest moments as a songwriter came with “Family Portrait,” a song about her parents’ divorce: “It brought a lot of healing to my family,” P!nk says. “We’re all just walking through the world, trying to figure it out together. I feel like I’ve made use of this life.”

P!nk’s not the only one who thinks so. The Pennsylvania native was this year’s Icon Award recipient at the Billboard Music Awards, where she performed a medley of her biggest hits. And this month, P!nk released her first-ever live album alongside All I Know So Far, an Amazon Prime documentary about her 2018-19 Beautiful Trauma World Tour. In the nearly two-hour-long film, the singer gets candid about juggling her career and her life as a busy wife and mother of two. As she told People, she’s come to learn that “most of the time,” it simply isn’t possible to have it all.

Still, the documentary helped her realize what she has accomplished as a mother. “What makes me the most proud is that I think my children feel seen and that we know how to find joy,” she says. “Even in darkness and even in trouble, we know how to have joy.”

Below, P!nk talks about the scourge of “sleepy” music, making it through grueling tours, and the performance that made her feel like a rockstar.

What’s the most overrated musical trend of the last 10 years?

Everyone just sounds like they’re so sleepy right now. I grew up listening to KRS-One, OutKast, and Nas. Where’s that sh*t? I want to dance. Maybe that just makes me sound old, but everyone just got so sleepy.

What’s a lyric you love?

“And every time I scratch my nails down someone else’s back, I hope you feel it,” from Alanis Morissette’s “You Oughta Know.” Great line.

You play the guitar, but what’s an instrument you don’t play that you wish you did?

I can play three songs on the piano. I wish I could actually play piano.

What’s a song that you’d want to play at your funeral?

What’s the first song you slow danced to?

Mary J. Blige’s What’s the 411? No one ad-libs like Mary J. Blige. She is just pure soul. You hear the truth in her voice. I like people to tell the truth when they sing.

Chris Stapleton, because he’s just an old soul. He’s also a painter with his words. No one sings like him. There’s a Scottish singer that I also love named Paolo Nutini.

Music snobbery is a shame because there’s just so much out there. You can’t tell me “…Baby One More Time” is not a good song. You can’t be a snob. You’ve got to just stay open.

What’s the weirdest thing you’ve written a song about?

And separately, what’s the weirdest way a song ever came to be?

“Please Don’t Leave Me” and “Sober” actually started in a dream.

Does it annoy you when people dissect your lyrics?

No, I love it. I don’t like telling people what the song is supposed to mean because it’s whatever it means for them.

What’s the most interesting song interpretation you’ve had?

I thought the lyrics to [Manfred Mann’s Earth Band’s] “Blinded by the Light” was “Wrapped up like a douche and then the roller in the night.” I just maybe this year figured out he’s not talking about a douche. That was a revelation.

Where’s your favorite place to write and compose music?

My favorite place is a studio in this old house on Rose Avenue in Venice Beach. In each studio, you’ll find a different way of capturing sound in the walls. Some people use foam padding, but there’s wooden carved vaginas in this particular studio, which is very interesting. It’s my favorite place in the world.

On Feeling Like A Rockstar & An Alternate Career Path

I don’t know that I’ve ever felt like that. Maybe when we did our cover of [Queen’s] “Bohemian Rhapsody” during [the Beautiful Trauma World Tour]. Down to the outfit, we nailed it.

I was a kid that struggled and I had a great guidance counselor in junior high school. She was the only adult that ever stuck up for me, and kids need to be advocated for when they can’t do it for themselves. I hate bullying and I hate the way the system treats kids. I was born a fighter, so I would’ve either been a lawyer or a social worker.

Was there ever a moment you felt ready to give up on musician life? If so, what got you through it?

Every tour, I’ve had a moment where I said, “I’m not doing this again.” It’s usually when you’re sick and you feel like crap. If you cancel [a show], you disappoint people and it’s a terrible feeling. When people turn against you and forget about your integrity and how hard you work, then it’s like, “F*ck this.” But no matter what happens in my life, I refuse to be a bitter person. So you quickly let go of that, you find your gratitude again, and you just forgive and forget and keep going.