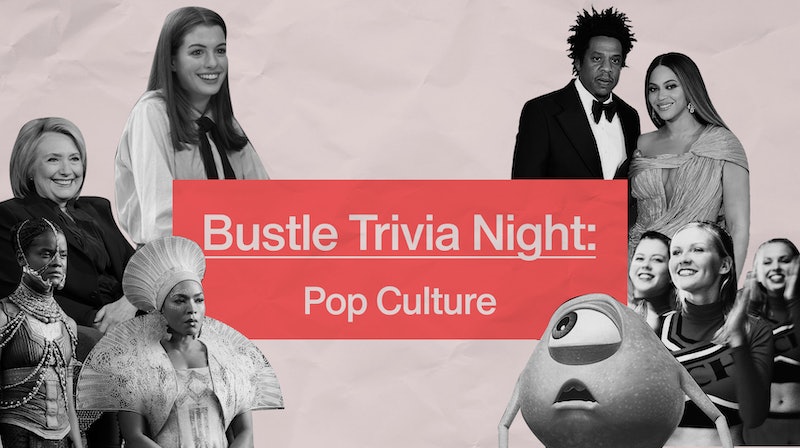 With physical distancing and quarantining taking precedent over social gatherings, trivia night looks completely different than it did earlier this year. What might have been a group of friends meeting up at the local bar to play trivia against a room full of other enthusiastic and buzzed people now looks like a computer screen with 10 smaller versions of your friends staring back at you via Zoom.

But a virtual trivia night can still be just as competitive and fun as trivia nights of the past. In fact, with the heightened amount of 1:1 time people now have with their TVs due to staying home, the competition should be at an all-time high. Just consider these 50 pop culture trivia questions the true test of how well you're spending your time while quarantined.

Below you'll find five categories comprised of 10 questions each: TV, Movies, Celeb, Nostalgia, and Quotes. (Answers are at the bottom to prevent peeking.)

You can also download Bustle's Pop Culture Trivia here and share it with your friends ahead of trivia night.

1) What is Eleven's real name in Stranger Things?

2) In Arrested Development, where is there always money?

3) What USA Network TV show did Meghan Markle appear in for seven seasons?

4) The Pearson family in This Is Us are famously fans of what NFL team?

5) Name five cities/states featured in the Real Housewives franchise, past or present.

6) Who wrote the novel that inspired the Hulu series The Handmaid's Tale?

7) How are Jon Snow and Daenerys related in Game of Thrones?

8) Who is the only Bachelor to marry his final choice on The Bachelor?

9) What is the name of "the mother" on How I Met Your Mother?

10) Does Stanley Hudson from The Office have a mustache?

12) What fictional country is Black Panther set in?

14) Put these Nicholas Sparks movies in order of oldest to most recent: The Notebook, Safe Haven, A Walk to Remember, The Last Song.

16) What is the name of the group of friends in The Hangover?

17) What is the name of the magazine Kate Hudson's character Andie works at in How to Lose a Guy in 10 Days?

20) What is the name of the ghost who haunts a toilet in a girls' bathroom at Hogwarts in Harry Potter?

21) Name all four of Kim Kardashian and Kanye West's kids, from oldest to youngest.

22) What actor is Gossip Girl star Leighton Meester married to?

25) What comedian has a tattoo of 2016 Democratic presidential nominee Hillary Clinton?

27) Where did John Legend and Chrissy Teigen meet?

28) Which Sex and the City star ran for political office in New York?

29) What are the names of Beyoncé and JAY-Z's twins?

30) What SNL cast member is Scarlett Johansson engaged to?

32) What actress played Kaitlin Cooper in Season 1 of The OC?

34) What is Mia's full name in Princess Diaries?

35) What 2001 Olsen twin movie features the sisters going to the Bahamas for winter break and getting mixed up with a man smuggling stolen artifacts?

36) On Even Stevens, what was Ren and Louis' older brother's name?

37) What show is this from? (Bonus point for naming the character)

38) What is Peyton's record label called in One Tree Hill?

39) What was Destiny's Child originally called?

40) What year did High School Musical come out?

2) In the banana stand