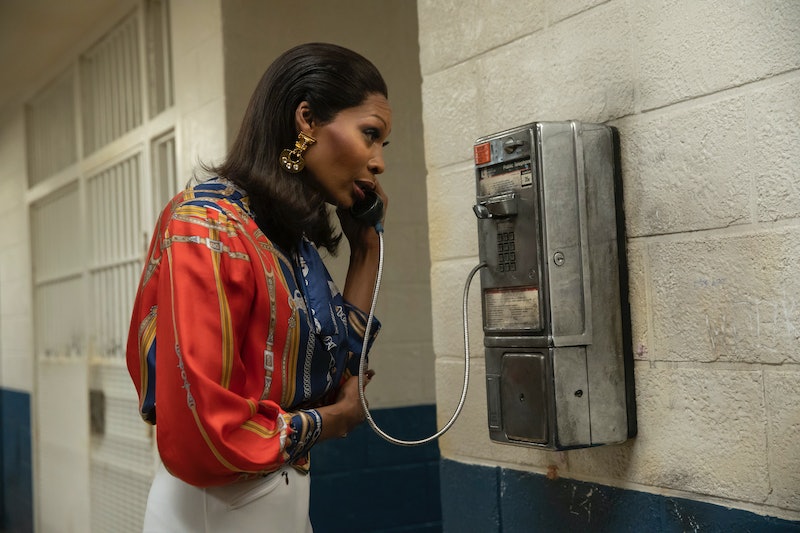 Spoilers ahead for Pose Season 3, Episode 3. In Pose’s final season, Elektra finally has to deal with the literal skeleton rotting in her closet. After the NYPD targets her new phone sex business and arrests her in the May 9 episode, she remembers that there’s a man decomposing in her apartment, so she enlists the help of her Evangelista family to hide the evidence before the police can search the place. What results is a poignant episode that highlights the joy and support within the queer community — even when that joy and support is often borne from struggle.

This was a priority for the Pose writers when they began work on Season 3. “We weren't interested in only telling a story about trauma,” executive producer Janet Mock, who co-wrote the episode, said at a press conference attended by Bustle. “The ballroom is a representation of what it means to congregate and share testimony and to love on each other. And our show is a celebration of the everyday intimacies.”

In Season 2, the body was a burden for Elektra. After leaving a client overnight while working as a BDSM mistress and returning to find him dead from a drug overdose, she hid his body in a trunk in her closet, knowing she’d receive no sympathy from the police if she came forward. It’s a plot line grounded in truth: it’s based on the real story of Dorian Corey, a drag performer immortalized in Paris is Burning who was part of the Harlem ball scene in the 1960s. After Corey died in 1993, friends looking to sell her clothes found a mummified body in her closet; police eventually identified the body as Robert Worley. No one has been able to establish how the two knew each other, but the theory is that Worley attacked Corey (either as an abusive partner or in an attempt to rob her) and Corey defended herself. Like Elektra, Corey took it upon herself to hide the body in a trunk until the day she died.

Initially, Elektra seemed resigned to the same fate. “I’ve had nightmares too,” she confessed to Blanca at the end of Season 2. “He’s mine now. He’ll be with me until the rest of my life.” But in Season 3, Pose reframes the story as a testament to resilience and unity instead of pain. Not only are the Evangelistas able to give the man a more considerate sea burial, but in putting themselves on the line, they’re able to return some of the sacrifices Elektra made to protect them in the past: leaving behind a mother who wouldn’t accept her, taking on risky work so they could live more comfortably. As Blanca tells Elektra, everything that she (and by proxy, the Evangelistas) have been able to accomplish stems from Elektra caring for her when she was younger, and the two have an emotional heart-to-heart about the love, friendship, and solace they’ve shared throughout the years.

More like this
Taylor Swift Visited The 'Glee' Set For This Bizarre Season 5 Episode
By Grace Wehniainen
'The Last Of Us' Episode Schedule Competes With The Super Bowl & Oscars
By Brad Witter
Linda Ronstadt’s “Long Long Time” Plays A Pivotal Role In The Last Of Us
By Brad Witter
The 'Freeridge' Cast Shared Their Hopes For A Potential Season 2
By Grace Wehniainen
Get Even More From Bustle — Sign Up For The Newsletter
From hair trends to relationship advice, our daily newsletter has everything you need to sound like a person who’s on TikTok, even if you aren’t.