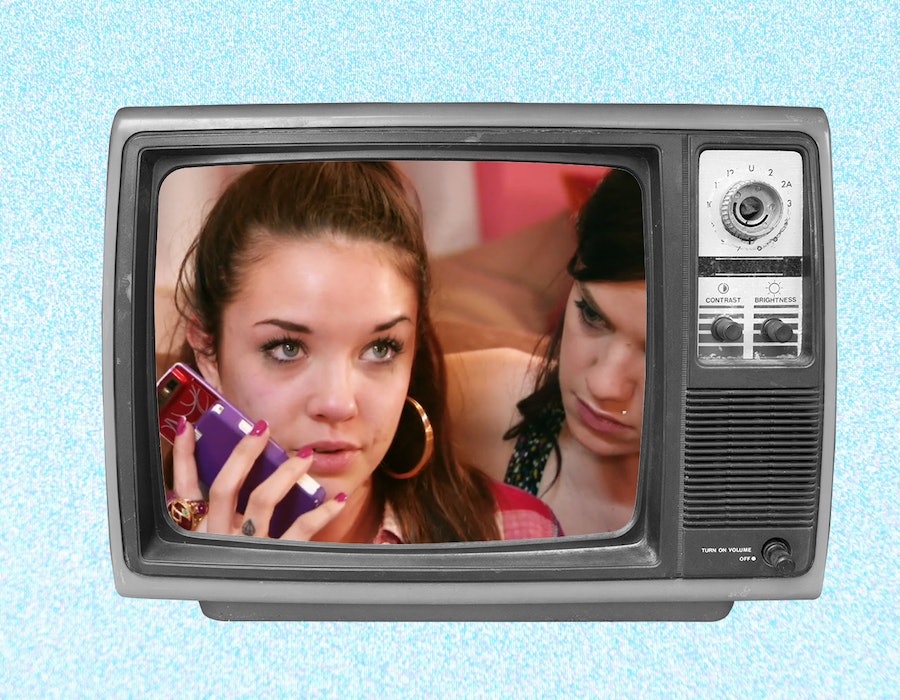 If you know anything about Alexis Neiers, it's probably that you don't want to be on the receiving end of a phone call from her. Her time as the star of the short-lived 2010 E! reality show Pretty Wild is mostly remembered for the viral moment when she called up Vanity Fair writer Nancy Jo Sales and left a chaotic voicemail admonishing her for her 2010 article detailing Neiers' involvement in the now-infamous Bling Ring (Neiers was out on bail for felony burglary charges while shooting the show).

Pretty Wild was canceled after one season, and Neiers pleaded no contest to a felony charge for burglarizing Orlando Bloom's home. She went on to serve one month of her 6-month jail sentence and pay a $600,000 fine. Nearly a decade later, the 27-year-old, who uses her married name Alexis Haines, is a sober mother of two and podcaster who works at her husband's drug treatment center.

As part of Bustle's Behind Reality series exploring how reality TV gets made, Haines revisited that iconic meltdown, the subsequent meme-ing of her rock-bottom moment, and what life is like after reality TV infamy, as told to Bustle's TV Editor Samantha Rollins.

I think what people don’t understand is that reality TV is not scripted, but [producers] do things to provoke the reaction that they want. I had just turned 18 when we started filming Pretty Wild. At the time I was recording a reality TV show, my entire world was falling apart. I was addicted to heroin and opiates, I was partying — my whole life was crumbling in front of me and I was just a kid. Reality TV is perfect for people who are naive enough and gullible enough and are on drugs or alcohol, because you’re extremely reactive and your prefrontal cortex, which is the part of the brain that’s used for sound reasoning, is completely hijacked. It’s kind of a perfect storm.

So here’s my take on "the Nancy Jo moment." I was given the [Vanity Fair] article and I was really looking forward to it because there had been so much negative press around me and so many people saying I robbed all of these houses, but I was only at one burglary, and they were saying all these things that were really unfavorable. And I’m not claiming, by the way, that I was some Mother Teresa, I certainly was not — I was checking cars for cash for my drug habit, panhandling on the street, constantly looking for my next fix. [I was a] sick person filled with a ton of trauma.

But I was really looking forward to this article giving my side, because this was my one opportunity to do it because we had turned down all other media. So as I’m reading through it, I’m reading quotes from other people in the Bling Ring, I’m reading [Sales'] portrayal of me, which was not at all honest. And I started to get really worked up. [Ed note: In a comment to Bustle, Sales said, "The magazine stood by the piece and so do I."] I felt like this was my one shot: If I was going to go to trial and anybody was going to read anything that I’ve ever said, this is it. And she totally f*cked me.

Back then, I had zero coping skills and no resilience, and so what happened was we started to do take, after take, after take of me recording this [voicemail] message. In between the crew and the cameras and my mom [yelling], I kept having to re-record it. I must have recorded it I don’t even know how many times. And then of course the scene that was released was the very last one, where I had an epic meltdown and I’m screaming. Of course they use the juiciest one.

It was quite traumatic in that moment, because if I was gonna go to trial, I was standing behind my truth in the fact that I wasn’t this Bling Ring mastermind who set out with this intention to rob Orlando Bloom’s house. That wasn’t me. I’m not denying at all my involvement [Ed note: she pleaded no contest to burglarizing Bloom's home] — what I’m saying is that to portray me as this Bling Ring mastermind that robbed all these people and had this intention was frustrating to me because that’s not the truth. I just wanted to be able to tell my side of the story, and I wasn’t given that opportunity to and never really have since.

What’s nice about recovery is that we no longer feel the need that people have to see us in a certain light. You can just live authentically as you, being honest and making amends every single day by dedicating your life to helping other people. I used to feel all the time like, "Everybody has to know that I didn’t rob Paris Hilton and I didn’t rob Lindsay Lohan and I didn’t, I didn’t, I didn’t." And now I’m just like, who f*cking cares what they think? What does it matter?

The memes actually make me really happy. The nice thing about healing is that we can have a laugh at ourselves. We don’t have to take life too seriously anymore. It’s so nice that I look at that and am like, "Ugh that’s so funny now, in hindsight." Because I was so out of control. That was a healing shame, being able to have a laugh about where you were.

I’ve watched a few episodes [of Pretty Wild] here and there. The Alexis that I was [back then], I have so much empathy and so much compassion for her. There are so many of those Alexises out there that are just really struggling and have had a lot of trauma and don’t know how to deal with it, and are always in a state of being reactive.

My husband and I plan on being open and honest about our experiences with drugs and alcohol with our children. My husband owns a drug treatment center, Alo Recovery Centers, and they’ve grown up in it. They’ve gone to AA meetings. I really believe in respectful parenting and obviously being age-appropriate — I’m not gonna have [my kids] watching the clip of me sliding down from heaven on a stripper pole. That’s not gonna happen. But if they saw the memes, I would [have that conversation].

If you could look at that Alexis and then see the Alexis today, you would see that recovering from trauma and recovering from addiction and from years and years of pain is possible. We’re all struggling with something, and hopefully we’re all on the path to recovery. That’s my wish and intention for every human being. Everybody deserves that.