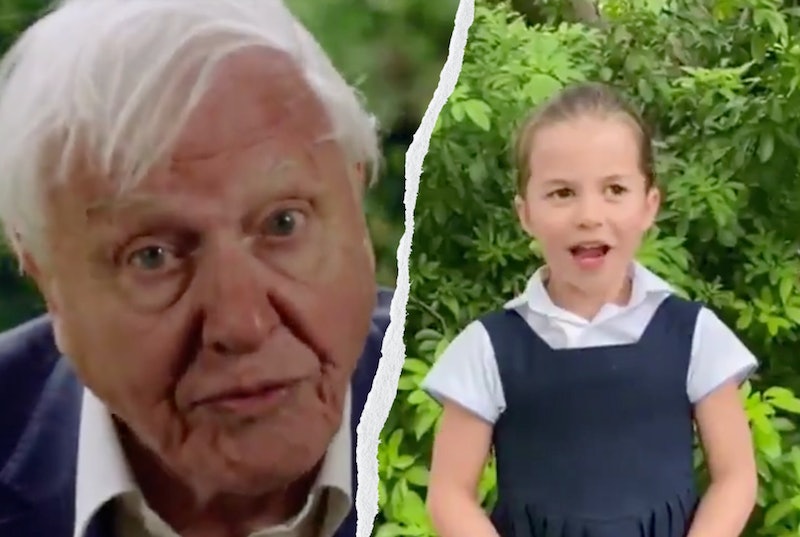 Fans of Sir David Attenborough have had an eventful few weeks. He recently broke the Guinness World Record for the fastest account to reach 1 million followers on Instagram. He’s also received high praise for his latest documentary, A Life on Our Planet. And it’d seem his fan base extends to the royals. In a video Charlotte revealed her favourite animal to David Attenborough. The presenter and naturalist visited Kensington Palace to speak to the Duke and Duchess of Cambridge as well as George, Charlotte, and Louis and he brought some seriously cool gifts with him.

When it comes to getting the lowdown on all creatures great and small, few people can speak with as much authority as Attenborough. The Cambridge children asked the documentarian questions in a seriously adorable video shared on the Kensington Royal Twitter page. Charlotte revealed she had a more niche favourite creature, saying, “Hello, David Attenborough. I like spiders. Do you like spiders, too?” Unsurprisingly Attenborough is a fan and told her, “I love spiders and I’m so glad you like them. I think they’re wonderful things.”

I’ve got to admit when a spider finds its way into my bathroom, it usually gets taken outside in a cup. Attenborough told the royal children he thinks people are scared of spiders because “they’re actually got eight legs, which is much more than us. And if you’ve got eight legs, you can move in any direction. So you can’t be quite sure which direction a spider is going to go.”

Later in the conversation, Louis asked which animal Attenborough liked, to which Attenborough responded that monkeys are his favourite. He was speaking to the Cambridges while visiting Kensington Palace for a viewing of his new documentary, A Life on Our Planet, which is available on Netflix. Sky also reported that during his time there he gave George a fossilised shark tooth as a gift. There are some serious perks to knowing the most famous natural historian in the world.

You can watch Attenborough’s full conversation with George, Charlotte, and Louis on Twitter, and A Life on Our Planet is available to stream on Netflix.