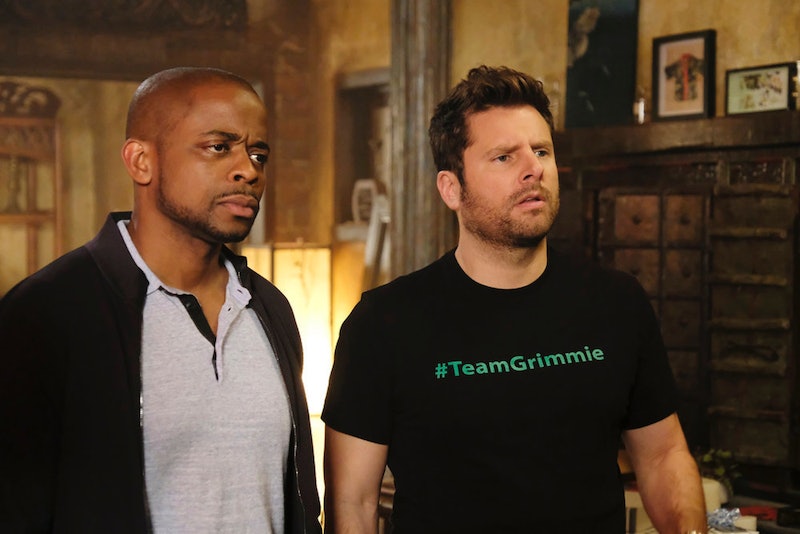 The Psych movie sequel, Lassie Come Home, is officially here. But it's been two and a half years since the original aired, so you may need to recap the first Psych movie before hitting play. Not every detail is relevant to the sequel (the writers pretty much gave up on the cliffhanger with Juliet's brother), but there are some things worth remembering so you're not confused when you dive back into the story. OK, you might still be confused, but only because Mary Lightly returns as an adult baby at one point, and there will never be a way to explain that. Here's what we can tell you...

Three years after the events of the television series, Shawn, Juliet, and Gus have all moved from Santa Barbara to San Fransisco. Juliet is working for the SFPD, Gus is back in the pharmaceutical industry, and Shawn has opened a San Fran version of the Psych office called Psychphransico, with decor inspired by Gremlins.

Juliet's new SFPD partner gets shot by Billy McGoldrick (aka the Thin White Duke), a David Bowie-obsessed villain played by Zachary Levi. Billy was one of Juliet's informants, having helped her take down dozens of criminals, but she eventually put him in prison too. This was his revenge.

The events of the first Psych movie had to be largely rewritten after actor Timothy Omundson (Detective Lassiter) had a stroke. But he makes a brief appearance in the film to give advice to Juliet on a phone call. In order to make up for Lassiter's absence in the first movie, the Psych sequel is almost entirely based around the character.

Chief Karen Vick's daughter Iris falls in with a bad crowd and starts stealing in order to impress a clique at her school. Juliet sets her straight, but Billy later kidnaps Iris and takes her to Alcatraz. When Shawn, Gus, Juliet, Chief Vick, Shawn's dad Henry, and coroner Woody show up to get Iris back, they learn that Billy isn't the real mastermind behind the hunt for Juliet.

The Return of Yin's Apprentice

Yin, a big bad from the original series who Juliet put behind bars years before, trained Allison Cowley to exact her own revenge scheme. Billy was simply a pawn, and Allison planned to kill everyone at Alcatraz. However, she's unsuccessful. Woody and Henry hold their own against one of her goons, Shawn and Gus outrun another, and Juliet takes on Allison directly while Chief Vick tracks down Iris. The good guys prevail.

Shawn proposed to Juliet in the finale of the show, but her ring was stolen. Three years later, the ring still hasn't been found, and Shawn refuses to marry Juliet until it is.

In the opening scene of the movie, Shawn gets caught rummaging through a criminal's things. He talks himself out of the situation by using his psychic skills to predict the criminal's future, and later calls his old officer buddy Buzz McNab to help his predictions come true. When they all do, the criminal decides to help Shawn out. He's able to locate the ring and, because he's ordained, marries Juliet and Shawn right there on the spot.

Unlike Gus, Selene doesn't think Pluto should be a planet — something they initially clash on, though they still end up making out. Selene also inserts herself pretty quickly into Gus' life, even offering to be Juliet's bridesmaid like five seconds after meeting her. (The character is played by Jazmyn Simon, who's married to Dulé Hill (Gus) in real life.)

Some Other Important Things

Shawn's dad Henry becomes a hipster. Woody the coroner relocates to San Francisco after getting fired from the Santa Barbara Police Department for dropping a chili dog into a cadaver. And Shawn and Gus rescue a guard dog from the villain's lair, name him Morrissey, and give him to Chief Vick.

Shawn is about to set off on his honeymoon when Juliet's brother (played by John Cena) comes barreling into the Psychphransico office. He's on the run from something and in need of Shawn and Gus' help. Because the sequel jumps two years forward, this particular plot line goes unresolved, but there's still a lot more action to dig into now that you're all caught up.

More like this
Everything To Know About 'Bel-Air' Season 2
By Brad Witter and Kadin Burnett
What’s New On Netflix: 'Never Have I Ever' & 'Indian Matchmaking' Return
By Arya Roshanian
Everything To Know About The HBO Max & Discovery+ Streaming Service Merger
By Brad Witter
What’s New On Netflix: 'Bridget Jones’s Diary' & 'Monster-in-Law'
By Arya Roshanian
Get Even More From Bustle — Sign Up For The Newsletter