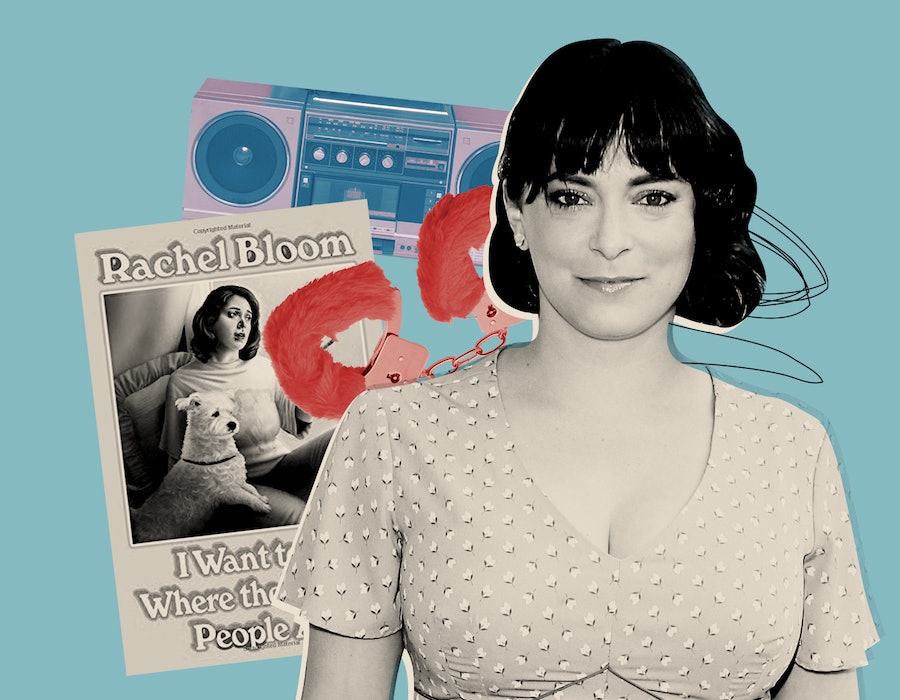 Rachel Bloom recently put a call out on Facebook looking to get in touch with her middle school classmates. “Hi, were you popular? Did I go to school with you? Did you maybe bully me? Would you want to come talk to me about it, for a public event?,” the status read. Bloom had agreed to participate in New York magazine’s annual Vulture Festival in conversation with one of her childhood bullies — but she hadn't nailed down which of her myriad of tormentors she'd share the (Zoom) stage with. "60 people [responded] with stories like, 'Hey, I don't know if I was popular, but here's how I felt.' It was just people venting how they felt in middle school and high school," the Crazy Ex-Girlfriend star and creator tells Bustle. "It only reinforced what I'm realizing as an adult, which is, everyone is insecure and miserable in middle school.”

Bloom's debut essay collection, I Want to Be Where the Normal People Are, begins with a meditation on that time in Bloom's life. “Were you bullied in middle school? Yeah? You were? Bullshit. You weren’t bullied. I was bullied. I am the ultimate judge of bullying and I conclude that I was bullied and you were not bullied. So says me, court adjourned, gavel goes bang bang,” Bloom writes in her first essay, “Pull Down Your Pants And Let’s Compare Traumas.” The following chapters chart the extent of her bullying, including the time a popular boy asked her out as a dare, and the toll it took on her psyche.

The emotional fallout of being outcasted is omnipresent in each essay, as well as all of Bloom's life experiences. Even in sections where she chronicles her meteoric rise in Hollywood, Bloom is still haunted by never feeling "normal" enough. But it's through writing about her journey to self-confidence in both I Want to Be and her Golden Globe-winning show Crazy Ex-Girlfriend that Bloom has begun to heal. "I make jokes in the book like, 'You weren't really bullied in middle school. Your trauma's bullshit. But in actuality, trauma and insecurity takes a lot of forms," she says. Seeing her fans relate to her trauma and share their own has made all the difference. "It's wonderful and it makes me feel less alone."

One of the ways that you explore your sense of identity in the book is through the lens of “normalcy.” How do you define the word “normal” and how has that changed for you over time?

All I can really define [it as is], “Am I happy? Do I feel authentic to myself?” Normalcy is actually whatever. Normalcy has nothing to do with the quest for happiness. Now I'm all about just marrying the way you feel on the inside with how you're living on the outside. Everything else is unimportant.

Granted, I care a lot about what other people think still. I'm still in my head about being normal or being weird. I am not fully enlightened. I can say this sh*t and know it in my head, but knowing it in my heart is a whole different thing.

When did you arrive at that conclusion? Because wanting to feel “normal” is something you write about having strived for for a long time.

I think it started after I graduated college. There's a real overlap with finding my own way with my art — and that [art] not being “normal,” but getting success from that — with the overall realization that normalcy means nothing. As I came into myself and what I wanted to say and who I wanted to be I cared less about what others expected from me.

Like when I did “F*ck Me, Ray Bradbury.” I approached [that video] like a comedy sketch, but it was grounded in who I was. I [would] see pop videos about this very narrow definition of what's sexy. Like a [video of a] guy with ripped abs at a club and that's what pop music is telling us that’s what we should be attracted to. But what I'm attracted to is very different from that. So I thought, "Oh, there's a comedic tension in that. Especially if I heighten it to like, 'F*ck me, Ray Bradbury.'" I'm not just saying what pop music expects me to. I'm doing a comedic heightening where I want to full on have sex with an old guy.

So that sketch went viral in a way that was a real surprise to me and that's when I started to be like, "I'm not just doing this as comedy. I’m [going to] explore these contrasts about what society says I should be and what I actually feel like. It's reaching people on a deeper emotional level, in addition to being funny." Finding the emotion in those contrasts — as opposed to just using it for comedy’s sake — was really eye-opening for me.

Why is sex and sexuality such a portal into artistic exploration for you?

I am still seeing a lack of representation [in entertainment] of how statistically most women's bodies work. Because [needing clitoral stimulation] is complicated and also it's not as sexy. What actually gets most women off isn’t just a wham bam moment of love and passion, which is what what society tells us love and sex should be.

So I want to pitch a sketch show that's all about female pleasure called And Introducing the Clitoris. I can share that because it's just my idea, it's not with any studio or work or producer yet. It would be a six-part limited series and each episode would be broken into “who, what, where, when, why, how.” So there would be an episode about, “What are the mechanics?” Or, “Why Should I Care?” Which is all from a guy's perspective of like, “How does the devaluing of female pleasure affect men?” Then we'd break into sketches. It's almost Inside Amy Schumer meets I Think You Should Leave.

In one essay you walk readers through the challenges of writing for network television, like having to run everything by censors. Is there something you wish you’d shown on Crazy Ex-Girlfriend that you weren’t able to, given The CW’s restrictions?

I wish I had shown people f*cking. I remember the song “Oh My God I Think I Like You” from when Rebecca and Greg start having sex in the first season. Santino [Fontana] and I both had normal bodies and had we been on Showtime I would've been excited to be like, “This is what [sex] looks like with regular bodies.” We also would have really shown them communicating a lot during sex, and how communication and consent can still be sexy.

As much as this book is the story of you finding self-confidence, it’s also a love letter to your awkward middle school self. In Hollywood we’re in a moment where we’re really revisiting the tween years: be it in Big Mouth, PEN15, or your book. Why do you think that time period is resonating and why did you want to explore it?

There is this awakening [in Hollywood] and it's based on empathy. It seems to me [that we’re] really trying to understand where other people are coming from and the kinds of problems that other people face. I think that we're really examining how the patriarchy hurts everyone. From the expectations of the way a woman should be, the way a man should be, and all of the things in between.

If you look at other generations’ [versions], like Freaks and Geeks and then The Wonder Years, people have always looked back on the time they were insecure. Now my generation is old enough to be able to make art about it.