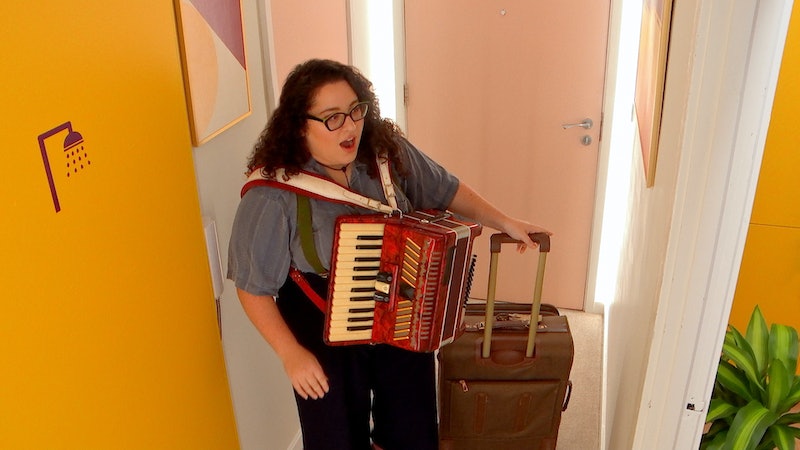 Tom Dymond/Netflix
By Justice Namaste
May 4, 2022

One of the contestants to watch out for this season is Rachel Evans, a paranormal researcher with curly hair, a love for the accordion, and a job that has her “bust ghosts,” as she writes in her Instagram bio. Rachel’s career has been primarily in digital media, where she’s worked both on screen as talent and behind the scenes as a producer — giving her all the tools she needs to charm her competition and bring home the $150,000 prize!

Read on to learn more about Rachel, from her ghost-hunting adventures to her professional wrestling expertise.

Rachel is a 29-year-old from Houston, Texas, who works as a paranormal researcher for the Travel Channel. That can involve digging into Bigfoot or ghost stories, and she wrote on Instagram that she feels “so blessed” that her job has given her “a platform to discuss these scientific matters.” Now, she’s excited she’s “finally on a tv [sic] show with living people,” as she joked when she announced she would be on The Circle. Her weary face emoji teased that navigating “the wild world of human interaction” may be a unique challenge for her.

According to her social media bios, Rachel also currently works as the social media lead for Smosh, a sketch comedy group that started off as a YouTube channel in 2005 and has expanded across multiple channels and social platforms in the years since. During her career, she has worked on numerous other YouTube shows and series across several channels, ranging from a noodle competition show called Hot Noodles to an advice show called Ask Us: An Advice Show Hosted by People Who Need Advice.

Most notably, Rachel spent several years working as the senior content manager and one of the main hosts of the YouTube channel Snarled, a platform for female creators, where she hosted series on topics including gaming and horror stories. She’s also a fan of professional wrestling, and for a while even hosted the WWE Lucha Underground After Show. On top of that, she has an extensive background in digital media work more broadly and has produced and helped cast talent for many brands over the years.

As Rachel’s career has centered around being a Very Online Person, it’s not surprising that she has an active social media presence. She’s most active on her Instagram, @rachelsamevans, where she has more than 31,000 followers, but her following on Twitter (where she’s also @rachelsamevans) isn’t too shabby at more than 9,400 followers. While Rachel is less active on TikTok, you can find her there under @rachelsamevans.

Rachel’s Instagram presence encompasses both the personal and the professional — she shares everything from photos of her parents and silly Halloween costume pictures to behind-the-scenes images from her work with Smosh and wrestling events. From the regularity with which they appear on her feed, Rachel appears to be close to her parents, who are real estate agents in Houston. In fact, Rachel’s mom, Vikki, once even appeared in one of her videos to give her dating advice and help her swipe on the apps!

On The Circle, Rachel’s taking the straightforward approach. “All I can be is honest,” she says in one of her promos. We’ll see how that works out for her as Season 4 progresses.