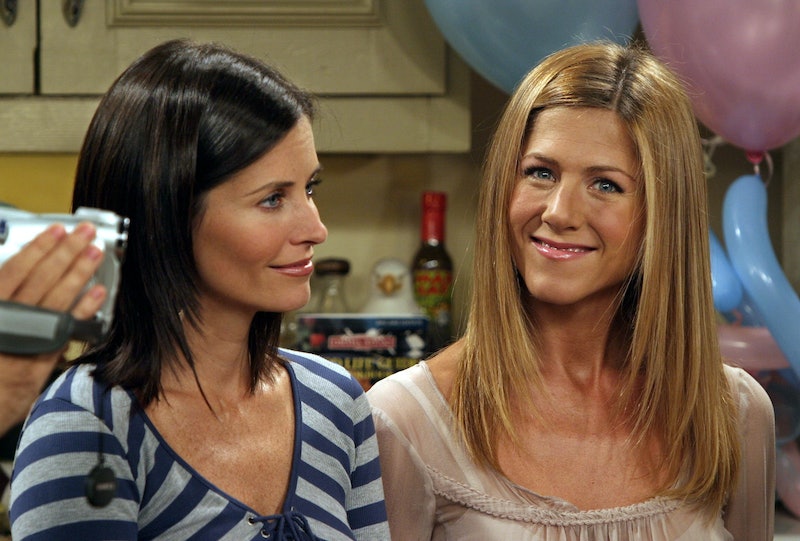 Friends' most iconic couple almost looked very different, because Rachel was almost played by Jane Sibbett on Friends, aka Carol, aka Ross' first ex-wife. Sibbett revealed the surprising piece of trivia during an interview with News.com.au, which was published on Tuesday, Sept. 23. Sibbett also revealed that she was offered the role before Jennifer Aniston was cast, but ended up turning it down.

"I actually was up for another character. They wanted me to be one of the main six," Sibbett dished. "It was actually Rachel but I usually don’t tell people that because Jen… There’s no one who could’ve done it like Jen."

She went on to explain that the reason she said no to what is now a life-changing role for Aniston had to do with Sibbett's real-life pregnancy. "I asked them [my agents] if they’d told the producers I was pregnant [at the time] and they said, 'Oh no, we thought we’d tell them later.' And I said, 'No you’ve got to tell them now.'" After the producers learned of Sibbett's pregnancy, they all realized it wasn't going to work out.

Still, the actor ended up starring in 15 episodes of Friends as Carol Willick after the original actor, Anita Barone, quit following the pilot. And, she has no hard feelings either. "I have no regrets, my goodness, there’s no way anybody could have come close to what Jennifer Aniston did with Rachel," Sibbett said. "She was so perfect."

Funnily enough, Mitchell Whitfield, who played Rachel's ex-fiancée, Barry Farber, almost played Ross in the NBC comedy, so both Ross and Rachel were almost played by their exes. "I went back multiple times, and then they realized Ross was the role for me," Whitfield told The Guardian for a February 2019 interview. However, according to Whitfield, "At the last minute, they said: 'We’re bringing in one more guy to read.'" It was David Schwimmer.