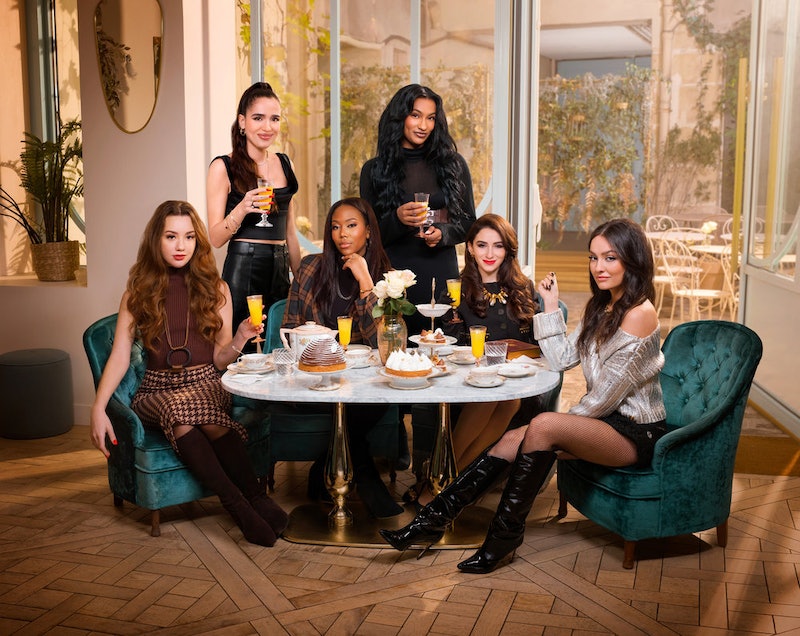 Are you happy to be in Paris? I’d imagine the cast of Real Girlfriends in Paris would all have the same answer. The latest reality show coming to Monday nights on Bravo promises French adventure and Parisian drama. The series follows a group of six young Americans living in “the City of Light.” The cast — which we’ll dive into shortly — consists of Anya Firestone, Emily Gorelik, Margaux Lignel, Kacey Margo, Adja Toure, and Victoria Zito. As is the case with any Bravo show, the ladies do their best to navigate the pitfalls of friendship, romance, opportunity, and ambition — only this time, it’s against the backdrop of one of the world’s most renowned cities.

Fans of the Real Housewives franchise will get to jaunt through Paris’ high society this fall. Real Girlfriends is set to kick off on September 5, which means that Monday nights are going to belong to Bravo’s newest title.

For those hoping to acquaint themselves with Paris’ realest girlfriends, Bravo provided some handy bios for their latest stars.

Described as “artistic, bubbly, and resilient,” Anya Firestone is unlike her cast mates as she’s lived in Paris for a decade. She has a love of all things French culture, which explains her master’s degree in French cultural studies, in addition to her status as a licensed tour guide for French cultural venues. She holds weekly Shabbat dinners with her fiancé Mathieu and her puppy Zsa Zsa. She often serves as a shoulder to lean on when the other cast members get homesick.

Emily Gorelik comes from New Jersey. She first visited France while studying at NYU and knew Paris was going to be her home. She’s lived in Paris for nearly two years, and her mastery of the language is just good enough to “order in cafés, date French boys, and of course, shop.” She’s currently pursuing luxury design, with dreams of bringing her mother’s interior design brand to Paris. Audiences will watch as she decides between following her original dream or accepting a fashion internship that may spur new ambitions.

From Southern California, Kacey Margo discovered her love of Paris while taking a semester off during college. According to her bio, “she fell in love with the culture and quickly secured a temporary role as an English teacher in a French classroom.” Granted, the move wasn’t completely smooth, forcing Kacey to split time between Paris, Los Angeles, and New York. Even though she’s settled in Paris, visa complications could stand in the way of her new home.

Margaux Lignel has spent years studying in Paris, specifically matriculating at the American School in Paris, the Fashion Institute of Technology, and Condé Nast College of Fashion and Design. Originally born to French parents in New York, she spent most of her years traveling between New York City and Paris. After all her tutelage, she’s hoping “chart her own path, on her own terms,” and who knows where that might lead.

Adja Toure first studied at Cornell before returning to Paris after falling in love with the city in her youth. According to her bio, “she always felt at home in France.” Adja is currently making her way into the beauty industry, while joining the dating scene. She will, however, need to confront her trust issues first.

Hailing from a small town in Texas, Victoria Zito embarked on France with big dreams of fashion. Despite always being encouraged to stick close to her mother, Victoria ventured to Paris in 2017 and has since become the head designer at a fashion brand called Chloe Colette. As a recent divorcee, she’s “ready to start a new chapter, focus on herself, and explore all the romantic opportunities Paris has to offer.”

The Real Girlfriends In Paris Trailer

The trailer, which dropped on August 8, gives more insights into what’s in store for Season 1. "I love living in a city where everything can change in one night," says Lignel in the trailer, setting the stage for the show. Zito chimes in on her own, speaking about the fashion significance of the city. "We're walking in the footsteps of all the greats," she says. "This is the fashion capital of the world!"

If romance isn’t the biggest draw, there’s always the dynamics between the cast members. "I'm happy because I'm making new friends and having new experiences," Toure says. "Being Americans in Paris, it's bringing us together," echoes Lignel. These were sentiments that Margo also shares, “They're like my family away from my family." But don’t expect everyone to get along all the time during Season 1. There should be enough drama and bonding to keep everyone invested.