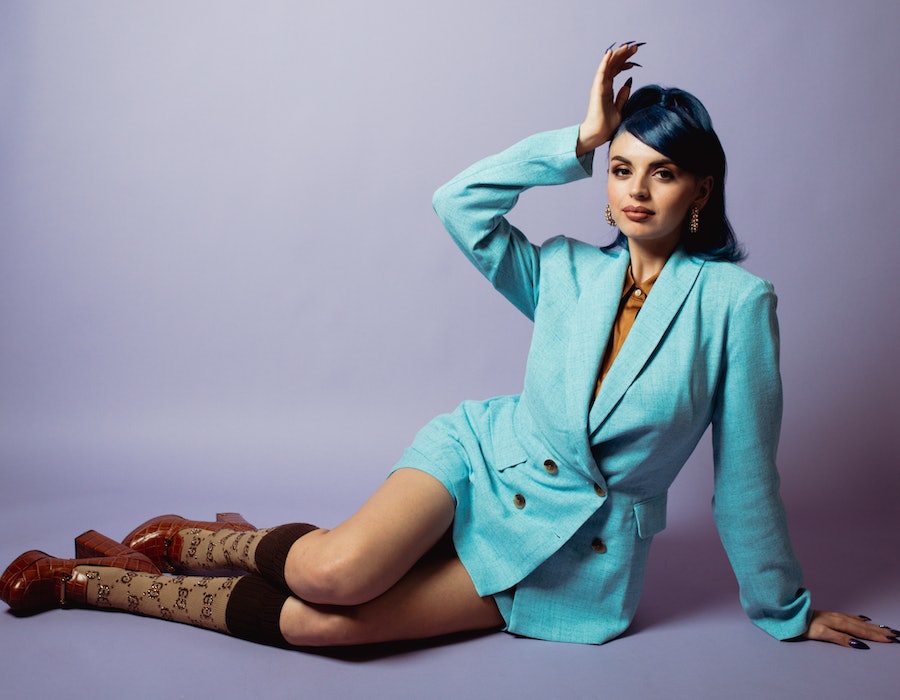 For most teen stars who successfully transition into legitimate pop stars, early embarrassing songs become forgotten stepping stones along the way to career highs. Rebecca Black had quite the opposite experience. She was 13 when “Friday” was uploaded to YouTube in early 2011, and you know what came next: hundreds of millions of views, ruthless and inappropriate viral parodies, and critics labeling it “the worst song ever.” An aspiring pop star could hardly be blamed for leaving the industry for good following such a massively discouraging experience, but Black wasn't about to give up.

“The reason that I even explored that opportunity was because I was annoyingly driven,” Black tells Bustle. She says she was fully aware that after “Friday” she’d have to work twice as hard to prove herself. She launched an instantly popular YouTube channel later that year sharing covers, original songs, and personal videos, many of which amassed millions of views. With a sizable audience to her name, you’d think Black could’ve quickly pivoted from meme status to a serious pop star, but for a while “Friday” deterred most potential collaborators from stepping into the studio with her.

Ten years later, however, a lot has changed. Appearing on an afternoon Zoom call from her home in Los Angeles is a bright, confident, 23-year-old Black, complete with blue hair and a collection of celebratory balloons hovering behind her. After all, she has a lot to celebrate. It’s the release day of her latest single and first co-directed music video, “Girlfriend,” an unapologetically queer anthem about wanting to reunite with an ex-girlfriend despite others’ dissenting opinions. It’s a euphoric pop track that sounds like it was crafted by the geniuses behind Katy Perry’s Teenage Dream and Carly Rae Jepsen’s E•MO•TION rather than for the woman who once sang the lyrics, “Fun, fun, fun, fun / Looking forward to the weekend.”

“It was all of the conclusions that I [came to about] that experience. Like, 'I’m not talented, I’m ugly, I’m a mess-up, I’m stupid.'”

“[Other people have made] some of those references, which is awesome because those are both legendary albums that have certainly inspired me,” Black says. “I’m so happy that people are liking it. We put so much into this.”

In a way, Black has put her entire post-“Friday” life into this single, which comes after nearly a decade of perseverance and a lot of therapy. She speaks about her past with a sense of remove, especially when discussing the resentment she used to feel toward the final day of the work week. “I remember so many specific moments of being on a phone call, and someone being like, ‘Happy Friday,’ and me feeling fully attacked,” she says, noting that therapy has helped shift her perspective and allowed her to let go of the harsh online insults that once swarmed her mind. “I learned that the issue was not, ‘Oh, you did this really bad thing.’ It was all of the conclusions that I [came to about] that experience. Like, 'I’m not talented, I’m ugly, I’m a mess-up, I’m stupid.'”

Another major part of Black's healing was finding collaborators who were willing to take a chance on her and help her hone in on a more authentic sound. Producers like Finneas O’Connell, with whom she wrote a track called “Satellite” in 2016, just as his sister Billie’s debut single “Ocean Eyes” was gaining traction. The pop world was finally within her reach, but before she could tap into the true depths of her artistry, she needed to share the one thing keeping fans from seeing her authentic self: her queer identity.

Long before officially coming out, Black had watched many of her YouTube peers publicly reveal their own queer identities online, though she had no desire to make a coming out video. “No one will ever do it as best as Troye Sivan,” she says, referencing his touching 2013 video that’s now been viewed over 8.7 million times. She's witnessed an entire spectrum of what can follow such a move, contrasting Sivan’s road to success as a musician and actor to the experience of her old friend Anthony Quintal, aka Lohanthony, who’s gone from proudly out to posting videos denouncing same-sex attraction in the name of Christianity. (“It's really confusing, and I just hope that he's okay,” she says of Quintal.)

Black has been long accepted by the LGBTQ+ community, the first to reclaim “Friday” as a novelty hit and in turn accept Black as a person rather than the butt of a joke. Recalling stories of West Hollywood partiers casually catching onto her queer identity and kindly keeping it under wraps, she notes that she wasn’t afraid of coming out, but rather dead set on doing it in “the utmost respectful way to the community.” After experiencing her first queer relationship and breakup (“The best relationship I’ve ever had”), she went on her friend Amy Ordman’s Dating Straight podcast in April 2020 and spoke about it, not realizing initially that it was her first time publicly discussing the topic. “I just decided to leave it,” says Black. “Then people paid attention, and it went from there, so it was actually a very low-key, safe feeling way of doing it.”

“I remember so many specific moments of being on a phone call, and someone being like, ‘Happy Friday,’ and me feeling fully attacked.”

Three months later, she wrote “Girlfriend” after running into her ex at a protest and rethinking the end of their relationship. The pair subsequently got back together for a short period of time, during which Black received a voicemail that now lives in the song’s intro (“Hey, let’s talk. Gimme a call back, bye.”). It wasn’t the first song she’d written referencing queerness, but it was the first time she didn’t change the lyrics’ female pronouns in order to hide it. If that means she’s now seen as a “queer artist,” that’s fine with her. “There are so many queer female or female-presenting artists right now that are amazing, but at the same time we need more. As just a queer person who listens to music, I need more,” she says. “I'm really proud to be representing the entire women loving women community in this little three-and-a-half minute way.”

Coming out has allowed Black to create more freely than ever before, which will show on the project she plans to release sometime in 2021; she’s been working with hyperpop producer Umru (Charli XCX’s “Click”) and pop hitmaker Jenna Andrews (BENEE’s “Supalonely”), among others. But first, she couldn’t possibly ignore the tenth anniversary of “Friday,” coming up on Feb. 10. Looking back, she recognizes the cultural moment it was and embraces it as a novelty hit à la “I’m Too Sexy” or “YMCA.” For its birthday, she’s planning a major collaborative remix and a new music video that she shot the day after our chat. “I am f*cking stoked, and it really is so special to me that everybody who was a part of it is just as gagged to be a part of it as I am,” she says with a grin. “I think it'll be a little bit of a moment.”

Ten years after surviving the backlash that started her career, Black is no longer worried about how her music will be received. Citing a recent experience writing a song she describes as her “favorite thing [she’s] ever done,” she notes that at first, the people around her didn’t like it. She finished the song anyway, and when she did, they all shared in her ecstatic love for it. “If you believe in something a lot, then people will come around," she says. "And if they don’t, then they’re not meant for you."

More like this
You’ll Definitely Recognise The Stars Of Amy Winehouse’s Biopic
By Maxine Harrison
Rihanna Shares Video Of 'Black Panther 2' Filmmakers' First Reaction To “Lift Me Up”
By Radhika Menon
"Lavender Haze" Star Laith Ashley Breaks Down Filming With Taylor Swift
By Jake Viswanath
Cruz Beckham Teased New Music With An Adorable Nod To Mom Victoria Beckham
By Stephanie Topacio Long
Get Even More From Bustle — Sign Up For The Newsletter
From hair trends to relationship advice, our daily newsletter has everything you need to sound like a person who’s on TikTok, even if you aren’t.