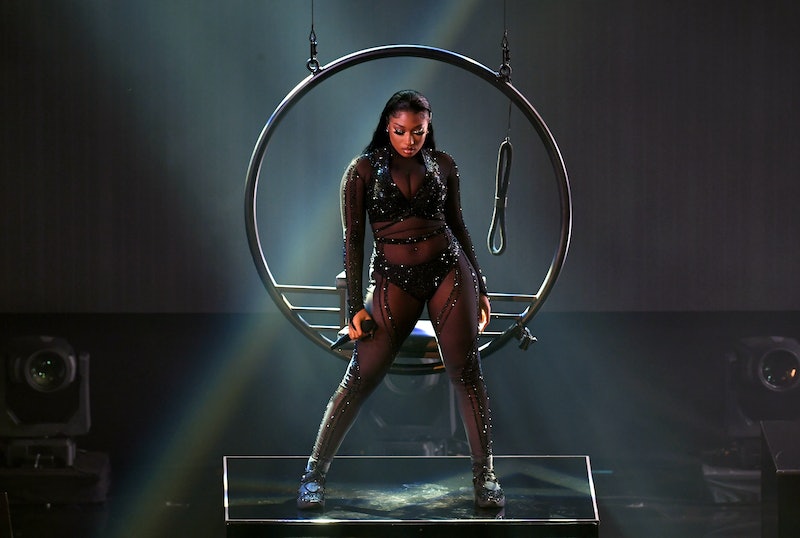 Nobody can resist the power of "WAP" — even one of the most influential politicians in the United States. California Rep. Maxine Waters complimented Megan Thee Stallion on "WAP," praising her and collaborator Cardi B for having the "audacity" to sing those iconic explicit lyrics. And Megan couldn't have had a better reaction.

During a joint interview with Harper's Bazaar, Rep. Waters was asked what music keeps her motivated. She first praised Megan's "Savage Remix" with Beyoncé, applauding Queen Bey for supporting a Black woman who is newer to the music world. "But then they told me to look at, was it 'WAP?'" she said, prompting Megan to start laughing giddily. However, unlike other politicians who took issue with the song's bold lyrics and bravado coming from two women, Rep. Waters absolutely loved it, even repeatedly telling Megan "don't worry" to reassure her.

"I said, 'Now that's audacity,'" she recalled. "That is the ability for women to take charge of what they want to say. I had paid attention to the young gangster rap time, when men were in charge. They said whatever they wanted to say about women, what have you. But women didn't say, for a long time, what they could say or wanted to say or dared to say. And so I thought that's audacity. I'm with you."

Rep. Waters went on to explain how she testified to the U.S. Senate when "gangster rap" first rose to prominence in the early '90s, as a number of politicians were fighting for government intervention, claiming the genre promoted violence and misogyny. "It would be a foolhardy mistake to single out poets as the cause of America’s problems," Waters said in 1994, as per the Los Angeles Times. "These are our children and they’ve invented a new art form to describe their pains, fears and frustrations with us as adults. Just because we don’t like the symbols they use or the way they look, we should not allow that to cause us to embark on a course of censorship."

Addressing Megan, the congresswoman said that rap has since become "accepted by so many and so loved by so many," and credited newer artists like her for keeping the genre alive. "It keeps evolving in ways that now you have a Megan, who is up for four Grammy awards, but doing it her way," she remarked. The rapper was all of us, responding with a stunned, "Oh, my gosh. I love it here." So do we, Megan.

More like this
Mel C Wants You To Know That Margaret Thatcher Wasn’t A Spice Girl
By Darshita Goyal
Two UK Cities Are Now In The Running To Host Eurovision 2023
By Sam Ramsden and Rachel Mantock
Everything To Know About Taylor Swift’s 10th Studio Album, 'Midnights'
By Grace Wehniainen and Jake Viswanath
Beyoncé’s Special Tribute To Sister Solange Was Both Touching & Hilarious
By Stephanie Topacio Long
Get Even More From Bustle — Sign Up For The Newsletter