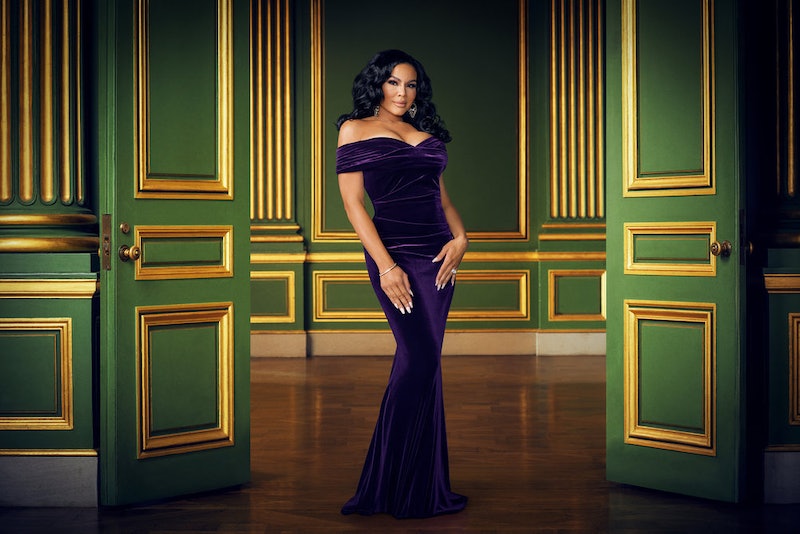 Following Monique Samuels’ exit from The Real Housewives of Potomac in Season 5, Season 6 will introduce a new face to the cast: Mia Thornton, a longtime fan of the show who jumped at the chance to join the cast. “I’ve definitely been watching [RHOP] since the beginning of time, and I’ve always remembered being inspired as such a young girl and knowing these women were opening their homes, being so vulnerable and sharing their lives with us,” she told E! News. “When I got the call, I was like, ‘OK, now it’s time. This is happening.’”

Mia seems to waste no time opening up her own home and getting vulnerable with viewers. The Season 6 trailer shows her discussing her childhood in the foster care system. “I didn’t grow up with all of this,” she says, referencing the glamorous Potomac lifestyle. “I earned it.”

Here’s what else to know about the newest RHOP housewife.

Mia Is A Business Woman

In addition to being the founder and CEO of the cosmetics company A Milleon London, Mia is a developer and franchise owner. According to her Bravo bio, she earned her degree in neuromuscular massage therapy and now owns franchises of The Joint Chiropractic.

In April, Mia celebrated the eight year anniversary of opening her first office. Since then, she’s expanded to multiple states (VA, Washington D.C., North Carolina, Maryland, and New York, per her Bravo bio), with most of that expansion happening in the last year. “This time last year I had 3 Doctor Offices...12 months later I now own 10,” she wrote on Instagram in March. “No, I couldn’t make every party or girls night out, but because of my sacrifice, I have tripled my income and have built a legacy for my children.”

The legacy Mia is building is for her three kids, Joshua, Jeremiah, and Juliana. According to E! News, two of Mia’s kids are with her husband Gordon Thornton, and her oldest, Joshua, is from a previous relationship.

She’s also a stepmother to Gordon’s children from his previous relationship. “We have such a blended family. His kids are phenomenal. His daughter calls me for advice, so it's just really great. It's just natural,” Mia told E! News. “We have four beautiful grandbabies. Two are adults moving into the college world, and two are in grade school. Of course I feel like the two younger ones are actually my birth grandchildren because I actually helped name them. I was there to be a part of their birth and things like that.”

Mia and her husband met in 2003 at a charity event. The two share a love for the massage and chiropractic business, as Gordon also owns franchises of The Joint Chiropractic. He previously owned franchises of Massage Envy, like Mia did when she first started her career after college, per her Bravo bio.

Gordon recently turned 67, while Mia is around 35. The two got married nine years ago, but even that hasn’t been enough time for Mia. “‘I wish I could turn back the clock. I’d find you sooner and love you longer,’” she wrote on Instagram alongside a photo from her wedding.

Mia preemptively shut down questions about the age difference between her and her husband in a recent Instagram post. “This is us. Unfiltered & Unbreakable. 14 years deep. So I'll take a moment to let all you thirsties in my DM know I am happily married to this quote ‘Ol Man,’” she wrote. “Y’all may not understand how or why but it’s not your place to seek understanding. No I didn’t need to post an extra long explanation as to why we love each other on Valentines Day...Why? Because we celebrate our love everyday!”

The same energy Mia channels into her business and relationship is evident on Instagram. Most of her posts feature photos of herself looking glam and powerful accompanied by inspirational quotes like, “‘While some women are searching for a rich husband, I’m focusing on being a rich wife,’” and “‘Know your Worth Sis, then ADD TAX.’”

She also occasionally post about her family, with a few photos of her husband and children.