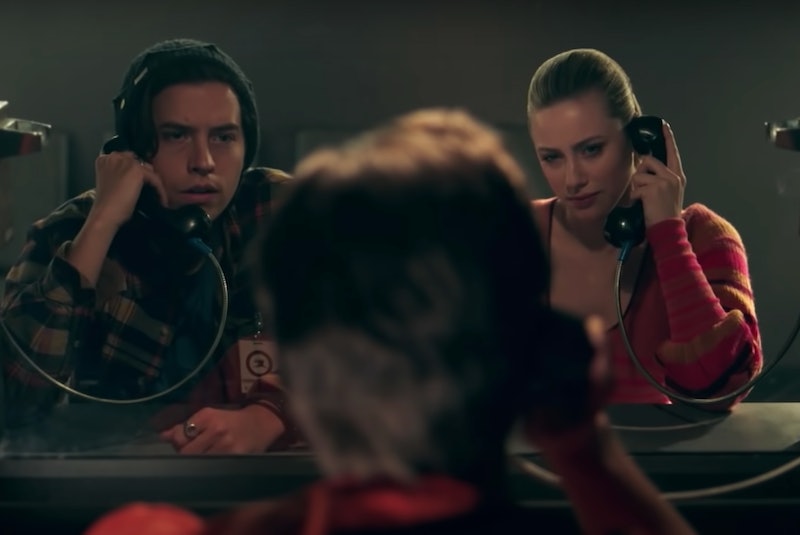 Buckle up, Riverdale fans, because the series is about to bring some major drama to your days at home. The CW released the trailer for Riverdale's fifth season today, Dec. 9, and it seems that Betty and Archie won't be able to hide their brief rendezvous from last season much longer. "Something happened between Betty and Archie," Veronica says through tears. And while this bombshell certainly monopolizes much of the preview, fans did get a peek at a prison visit, some violent videotapes, and a blink-and-you'll-miss-it moment of Toni and Cheryl (aka Choni).

The trailer opens with Bret in prison, seemingly warning Betty and Jughead about something that, to be quite honest, sounds pretty terrifying. "Something's coming, and it's going to hit you like a Mack truck," he says. The remaining minute of the preview is packed with drama, from the return of the voyeur videos, a risqué moment of Bughead in bed, and the crew's senior prom — which doesn't appear to go very smoothly (shocking, we know).

In true Riverdale fashion, the rest of the trailer flashes to people in scary masks, blood-stained t-shirts, and even a dead body hanging from the ceiling. Jughead also throws punches, someone with a knife comes for Jellybean, and Archie visits his dad at the cemetery. Something noticeably absent, however, was the Choni content fans were promised by the Riverdale showrunners. The duo was spotted for only a brief second in the preview, which was surprising considering Vanessa Morgan's comments this summer about how the series sidelines its Black characters.

When Morgan tweeted that she was tired of Black actors being used as "non-dimensional characters," Aguirre-Sacasa responded to her allegations on Instagram. "We hear Vanessa. We love Vanessa. She's right," he wrote. "We're sorry and we make the same promise to you that we did to her. We will do better to honor her and the character she plays. As well as all of our actors and characters of color."

Now that the trailer dropped, though, fans are calling the showrunner out for not keeping his word. "There's literally no choni and that is a problem bc y'all promised change!" one person tweeted. "What is that about!" Several other fans on Twitter echoed that same sentiment.

With so many fans disappointed at the lack of representation in the trailer, here's hoping for a more diverse and inclusive Season 5. Riverdale will premiere on The CW on January 20 at 8/7c.