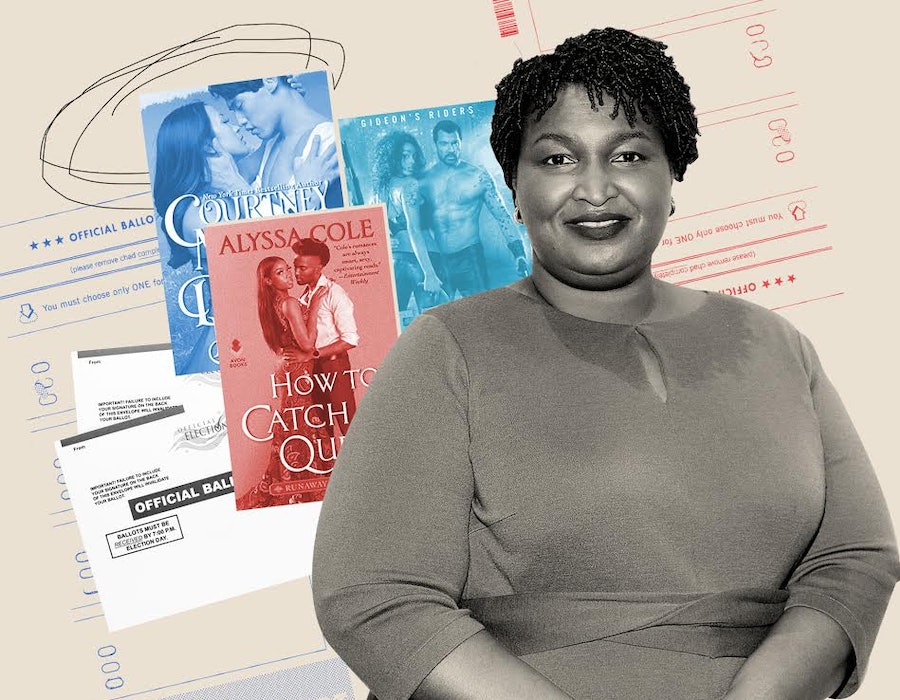 Earlier this month, voting rights advocate Stacey Abrams helped pull off one of the biggest upsets of the 2020 election cycle: turning the Peach State blue in the presidential race for the first time since 1992. Those 16 electoral votes later contributed to Democrat Joe Biden’s win over incumbent Donald Trump and also earned Abrams the title "The Political Hero America Needs."

But before Abrams became one of the most recognizable faces in Democratic politics, she was a romance novelist writing under the pen name Selena Montgomery. Abrams published eight romantic suspense novels between 2001 and 2009 and has always been unapologetic about her writing roots. “Regardless of genre, good writing is good writing,” she told The Washington Post in 2018. “Romance is one of the oldest forms of storytelling, and I’m honored to be in the company of extraordinary writers.”

Now the community that the former Georgia gubernatorial candidate has long championed is getting political, too. While the state of Georgia went for Biden in the presidential race, Abrams’ work in this election cycle isn’t done yet. There were also two U.S. Senate races on the ballot in Georgia on Election Day. But because neither candidate in either of the contests reached the 50% threshold to win a seat outright, there are now two separate runoff elections taking place in the state on Jan. 5, when Democrats hope to elect Jon Ossoff and Rev. Raphael Warnock.

So to help ensure those seats go blue, best-selling and award-winning romance authors Courtney Milan, Alyssa Cole, and Kit Rocha (the name for writing duo Donna Herren and Bree Bridges) have come together to organize an auction aptly titled Romancing the Runoff. The goal is simple: Raise funds for those in Georgia already doing the work, including Abrams’ organization Fair Fight, Black Voters Matter, and the New Georgia Project.

"At the end of the day, romance delivers you the win. That’s really what this has felt like."

While the goal is simple, the auction is anything but. The Romancing the Runoff website has turned into an extravagant affair, with more than a dozen virtual romance-fans-turned-volunteers cataloguing more than 700 items from some of the biggest names in the space. There are big-ticket items, too. Bridgerton author Julia Quinn and the stars of the series’ upcoming Shonda Rhimes-produced Netflix adaptation donated a signed copy of the new tie-in novel. Beloved contemporary romance writing duo Christina Lauren are auctioning off a PJ party for the winner and six friends. Sheryl J. Anderson, showrunner of Netflix’s Sweet Magnolias, is giving one lucky person a TV pilot consultation. Even acclaimed author Neil Gaiman crossed the literary Rubicon and put a signed limited edition copy of Neverwhere up on the site.

It's an enormous feat to have pulled off mere weeks after the election, one that the organizers attribute to the fact that the romance community is Very Online. (Their digital status is due to the fact that it was long considered taboo — and still is in many book circles — to read and talk about romance novels, leading fans to venture to the internet.) “You discover there’s an entire community out there that intelligently discusses these books,” Milan explains of their camaraderie. “The community becomes hyper-bonded in ways because we do face a lot of external criticism that seems very unfair.” Thus, Romancelandia is known to digitally swarm when anyone speaks ignorantly about the genre, its authors, or its fans on social media.

Likewise, they also show up to support one another and the causes that the community cares about. For example, in 2019 the romance site Love in Panels organized Romance for RAICES, an auction that raised over $23,000 for RAICES and The Young Center to help people through the immigration process in the United States. Organizers said the fundraiser was important because the romance community “believes in a Happily Ever After for everyone.”

Romance fans also went hard for their man Joe Biden. Bestselling historical romance author Sarah MacLean and romance critic Jen Prokop, who co-host the popular podcast Fated Mates, worked with progressive advocacy group Indivisible to create a phone banking initiative called Fated States this election cycle. What was supposed to be a one-off partnership turned into a six-week operation with a number of high profile romance novelists joining the banking sessions; by Election Day, roughly 300 volunteers had made more than 300,000 calls about the presidential race to voters in seven key states, including Wisconsin and Georgia. “Romance is about the fight for identity, hope, love and joy,” MacLean says of launching Fated States, which she plans to keep active even now after the election. “At the end of the day, romance delivers you the win. That’s really what this has felt like.”

That desire for the win is driving Romancing the Runoff organizers as their auction comes to a close this week. (They're currently on track to raise close to $500,000 from their efforts, having secured $100,000 in the first 24 hours after the auction went live.) But above all, they’re keeping their eyes on the prize of helping Abrams and the organizers on the ground in Georgia elect two Democrat senators. Because at their core, romance novels are about figuring out how to work through a dark moment to find that Happily Ever After. “We read these books about the world falling apart and people coming together to put it back together to get their happy ending,” Bridges explains. “It’s almost like a training.”

Hopefully they’ll get another one in 2021.